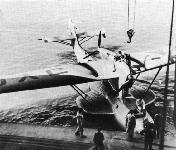 A pre-production Do 18D with cut-down tail fin and braced endplate auxiliary fins, tested as an optional tail configuration to that finally adopted by the production series.

D-ANHR after rebuilding as the sole example of the Do 18L, which, flown on 21 November 1940. was powered by two BMW 132M air-cooled radials.

The first of the Do 18s actually operated by DLH, the Do 18 V3 D-ABYM Aeolus, making a low run over Lake Constance. This aircraft flew from Horta. in the Azores, to Hamilton, Bermuda, on 11 September 1936, after a catapult launch from the Schwabenland.

A Do 18D about to be lifted aboard a seaplane tender

A Do 18D-3 photographed in 1940. Note the revised bow line, and the large windscreen protecting the dorsal gunner.
i

The definitive production version of the Dornier flying boat, the Do 18G, which featured uprated engines and more effective defensive armament. Most flying boats of this type were converted as Do 18Ns for air-sea rescue duties.

The side profile drawings depict (top to bottom) the Do 18a (V1) as originally flown (note shape of Jumo 5C nacelle); the Do 18 V4 (with twin fins and rudders); the production Do 18D-2, and the experimental Do 18L.