AIR MAIL SERVICES IN COLOMBIA: In our issue for October 23 we published a report on the successful air mail services operated in Colombia by the "Scadta." We reproduce photograph showing one of the Junkers seaplanes, which are employed on portions of the service, starting from the Magdalena river for Bogota.

THE FLIGHT TO INDIA: On November 20 Air Vice-Marshal Sir Sefton Brancker, Director of Civil Aviation, started on his flight to India on a D.H.50 biplane (Siddeley "Puma") piloted by Alan Cobham. The accompanying photograph shows the "50" being filled with "B.P." fuel prior to the departure from Stag Lane Aerodrome. Incidentally, "B.P." originates from the Persian Oil Fields, one of the countries to be traversed in the course' of the flight, so here, perhaps, is a modern version of "taking coals to Newcastle."

THE PARNALL "PIXIE III" LIGHT 'PLANE: This photograph shows the machine in monoplane form, but it will be recollected that it can be converted into a biplane, and that, as a matter of fact, it flew in this guise at Lympne. The machine shown is that carrying the number 18 in the competitions. Mr. Frank Courtney is in the pilot's seat, and Mr. Harold Bolas is the passenger on this occasion.

MAJOR ZANNI'S WORLD FLIGHT: The above photograph shows Major Zanni's Fokker-Napier arriving at Hinandi, Iraq. The Argentine airman has got as far as Tokio, but owing to the lateness of the season he has decided to abandon the flight. Major Zanni has taken 19 flying days for his Amsterdam-Tokio flight - one day less than Pelletier d'Oisy's Paris-Tokio flight. The first 7,500 miles (Amsterdam-Hanoi) was accomplished in 17 flying days and with one Napier "Lion." Then the machine stuck in the mud and was crashed. The rest of the journey was completed on a new Fokker-Napier. Major Zanni, in a cable from Tokio, says :- "Very delighted state two Napier engines worked admirably until now without slightest indication trouble wear, and without any necessity change or touch parts."

Maj. Zani's World Flight: Maj. Zani, the Argentine airman, who has been attempting a round-the-world flight on a Fokker biplane fitted with a Napier "Lion" engine, has, after reaching Tokio, postponed the flight owing to the lateness of the season. The annexed photograph shows the seaplane model, at Haiphong, being refuelled with "Shell," which Maj. Zani said he "considered to be the best which I have ever used throughout the whole of my career as an aviator. By its unvarying quality it permits one to obtain from the engine the maximum power without imposing any strain."

PEACETIME PRODUCTION: A view inside the Fokker works at Amsterdam, showing a batch of Fokker D.XIII single-seater chasers. These machines, a specimen of which will be exhibited at the Paris Aero Show, are fitted with Napier "Lion" engines.

SOME CONSTRUCTIONAL DETAILS OF THE CURTISS P.W.8: 1. One of the "cellular" wing panels, which is covered with Curtiss-ply. 2. Centre-section wing radiator unit. 3. Engine and fuel tank section of the fuselage. 4. The tubular steel fuselage. 5 and 7. The welded steel tail units. 6. Engine mounting.

FORMATION FLYING IN SWEDEN: Our photograph shows one side of a formation of S.11 Svenska Aero A.B. seaplanes during practice. The photograph, which was taken from the Squadron-Leader's machine, shows typical Swedish "country" below.

THE AUSTIN "WHIPPET": Fitted with a six-cylinder Anzani engine of 45 h.p. this machine has an excellent performance coupled with low landing speed. It is used by an Air Force Officer as a run-about, and has been in service for some four or five years.

A NEW GERMAN LIGHT PLANE: The "BAG E.l" Bahnbedarf Darmstadt on which recently Herr Botsch flew from Darmstadt to Johannisthal (Berlin), a distance of 310 miles, in 3 1/2 hours.

This photograph gives a good idea of the engine cowling, wing attachment, pilot's cockpit, etc., of the Darmstadt "BAG E.l." The engine is a Blackburne.

THE DORMOY "BATH TUB" AT DAYTON: This parasol monoplane, with short nacelle and open tail booms, is fitted with a four-cylinder Henderson engine.

THE MUMMERT LOW-WING MONOPLANE: This machine won one of the events at Dayton. Note the very wide wheel-track. The engine is a Harley-Davidson.

THREE-QUARTER FRONT VIEW OF THE DRIGGS-JOHNSON LIGHT MONOPLANE: Note the celluloid window surrounding the cockpit. The engine is supplied with air for cooling through the scoop under the airscrew, and through louvres in the sides of the cowling. Entrance to the cockpit is by the door on the port side.

THE DRIGGS-JOHNSON LIGHT MONOPLANE: Side view. The wing is covered with ply-wood up to the rear spar.

The "Holland H.2" Light 'Plane: This is a single-seater monoplane, a development of the Carley light monoplane built last year. It has a 25 h.p. Anzani engine.

The "Holland H.1" biplane: This is a two-seater machine which may be described as a light 'plane "just growing up." It is fitted with a 30-35 h.p. Anzani engine.

THE CASPAR LIGHT MONOPLANE: Three-quarter front view. The engine is an A.B.C. "Scorpion."

The Caspar light monoplane has its wings flexibly mounted by means of springs so as to take advantage of pulsating winds. The number of ribs has been reduced to a minimum. 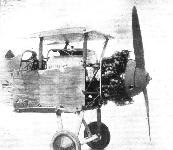 The Martinsyde A.D.C.1: View of engine mounting, etc. This photograph was taken before covering. 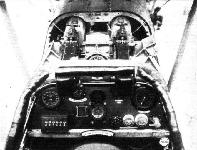