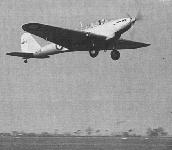 The prototype Battle taking off from Hayes in March 1936.

Dramatic view of Battle K7551 flying from Hayes on July 6, 1937. This first production aircraft was tested by the A&AEE, RAE and the makers before going to a general reconnaissance unit at Exeter. It was damaged beyond repair during a forced landing at Tiverton, Devon on August 27, 1940.

A flight of Battles of No. 142 (B.) Squadron about to release their bombs (practice variety) over an aerodrome target.
Those three Battles again - K7662, K7674 and K7677. All three aircraft became maintenance instructional airframes in 1940. 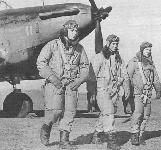 Three potential aces at an advanced training squadron with the Royal Canadian Air Force in 1940. A total of 739 Battles found their way to Canada as part of the Commonwealth Air Training Plan.

200 Battle trainers were built, the first appearing in 1940. The two separate cockpits necessitated fairly extensive changes to the fuselage structure.