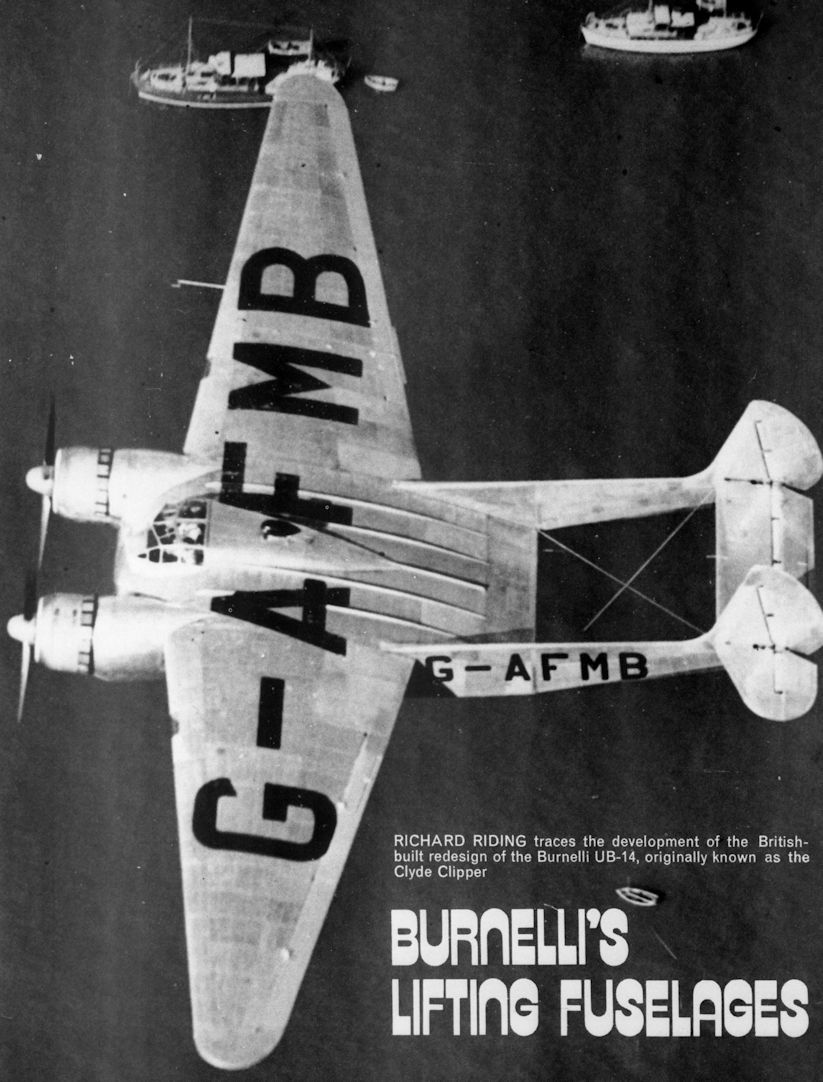 THE claims for the basic lifting fuselage scheme have been set out so frequently as to warrant only the briefest resume. They include cabin spaciousness, safety in emergency landings, and ease of operation with one engine cut out. The latest development of the theme is the machine now almost ready for flight trials at the Southampton works of Cunliffe-Owen Aircraft, Ltd., where Mr. Cooper is chief draughtsman, with Mr. Fisher supervising design technicalities.
The name “Flying Wing" has been adopted for the machine, although there is a more or less conventional tail carried on two boom members. The new aircraft is externally reminiscent of the American U.B.14, which has been used for experimental work, but the structure has been entirely redesigned.
Outer wing panels, strut-braced to the centre-wing portion, are of two-spar construction with smooth duralumin sheet covering. Duralumin extrusions of T section are used for the spar booms, the vertical webs being of solid sheet with vertical stiffeners. Normally the main ribs (which extend only between the spars so that a torsion box is formed by the front spar, top skin, rear spar and bottom skin) have deep channel-section booms and girder-type bracing members of channel section.
There are three special ribs, including that at the root, which are of the plate type.
In addition to these three special ribs are four "tank" ribs of different design. These four ribs follow the shape of the upper portion of the tanks, the latter being suspended by straps. Tank loads are taken mainly by a dummy spar (similar in construction to the main spars) running the length of the tank bay. Stress-carrying tank doors, secured by a considerable number of Simmonds lock-nuts, are located in the bottom skin of the outer wing panels. The wing tips are easily detachable. Nose ribs are of the flat plate type with diagonal channel section stiffeners.
The slotted ailerons are of high-aspect ratio, and are split to prevent hinge binding. They are fully mass-balanced, and an attempt has been made in their design to overcome yawing tendencies by providing a "digging-in" effect for the nose of the raised aileron. The aileron spars have booms of folded channel section, and their trailing edges are of wrapped sheeting.
Split hydraulically operated flaps are fitted between the central wing section, or fuselage, and the ailerons on each side, and there is a third flap beneath the centre section. The outer flaps can be operated independently of the centre-section flap through a Dowty pre-selector valve system in conjunction with Arens push-pull controls. On the U.B.14 it was found that a fuselage flap of the type employed gave a remarkable improvement in the maximum lift coefficient.
The centre wing portion, which houses the passengers, was passed by the N.A.C.A. as providing 20 per cent, of the total lift. This figure has been accepted by Farnborough and stress analysis has been made accordingly.
In the wind tunnel ot the New York University it was discovered that the proportions of the lift provided by the outer wings and the centre wing varies with incidence. At high angles the greater part is derived from the outer sections, the lift piling up towards the centre as the incidence is reduced. Under maximum speed conditions it is claimed that approximately 90 per cent, of the lift is provided by the centre portion. This characteristic, in conjunction with the space available in the centre wing portion, suggests possibilities with retractable outer wing panels.

The central wing portion has four main transverse bulkheads. Number 1, in the plane of the front spar, has extruded duralumin boundary members of T section, a flat plate web, and vertical and horizontal stiffeners. There is a door giving access to the pilot’s compartment. No. 2 bulkhead incorporates two equally spaced pillars of Accles and Pollock square-section tubing. The third is a plate-type bulkhead similar to number one, but of rather lighter construction. This bulkhead incorporates a door giving access to the retractable tail wheel. Numbers 2 and 3 bulkheads are connected by specially shaped fore and aft shear panels, permitting ease of movement in the passenger cabin. The fourth bulkhead, also of the plate type, slopes forward. This has extruded booms, a plate web and stiffeners, and is designed to carry the tail wheel loads.
Flat plate side panels of the centre wing portion are of aerofoil section and have heavy angle extrusion boundary members. A door is fitted on each side between bulkheads numbers 1 and 2. The sides are divided into a number of small panels by vertical and horizontal stiffeners. The roof sheeting has transverse stiffeners of rolled "top-hat" section. Externally there are fore and aft roof "skids"; these are heavy dural extrusions of inverted T section, and run from bulkhead number 1 to number 4, transferring the air loads to the bulkheads. There are two Rhodoid panels in the roof which act as emergency exits and provide additional lighting.
The floor takes the form of transverse corrugations attached inside the skin and carrying sheets of 3/16 plywood. "Skids," similar to those on the roof, are bolted to the bulkheads.
Twin tail booms are formed of duralumin D sections with flat sides incorporating vertical stiffeners. These house the control cables and are fitted with the appropriate inspection holes. The rear sections are tilted up at a fairly sharp angle, though top fairings give the impression of greater depth and less angularity.
The retractable tail wheel is of special Dowty design and is carried in a sturdy Hiduminium casting. The arms of the fork are arranged to swing on what are virtually stub axles in such a way that vertical movement of the wheel causes the axle attachment points to splay outward, their movement being resisted by a transverse spring in the axle of the wheel. The tail wheel is of the fully castoring, self-centring type, but provision is made for a castor-locking device remotely controlled by Arens push-pull controls. Take-offs and landings will be made with the wheel locked against castoring, the lock being released only for taxying. The main wheels (Dunlops with differential pneumatic brakes) retract forward into the engine nacelles. Each has two shock absorber legs with inter-connecting balance pipes. The axles are square at their ends, and it is arranged that the wheels can be quickly removed by releasing two studs. A lost motion scheme ensures that the first half-inch of the retracting motion unlocks the undercarriage at the radius rod knuckles. Retraction is normally by an engine-driven Dowty pump, but there is a Dowty hand pump for emergency use in addition to an air-release system designed to blow down all the jacks. Should these three methods fail it is possible to lower the wheels manually.
The cabin will seat twenty in comfort, though the first machine has fifteen super-luxury seats by Rumbold, the layout being shown in the drawing on page 572. The cabin is to be fully soundproofed and luxuriously furnished.
The engines, mounted in nacelles at the forward corners of the centre wing portion, are Bristol Perseus XIVC nine-cylinder sleeve-valve radials, rated at 710 h.p. at 4,000ft. and giving a maximum output of 815 h.p. at 6,000ft. The take-off output is 900 h.p. The cowlings are of the standard Bristol long-chord type, with controllable gills and a single outlet from the nose-type exhaust ring, the tail pipes passing through the central wing portion so that only their ends protrude in the air stream. Airscrews are of the V.D.M. electrically controlled fully feathering three-bladed type and have a diameter of 10ft. 6in. There are two types of pitch indicator, the first being mechanically driven and mounted on the nacelle; the second is on the dashboard.
Petrol is carried in eight wing tanks, two of 54 gallons capacity; two of 67; two of 100; and two of 104. The oil system incorporates Robertson coolers.
Growing out of the top of the centre wing portion at its forward end is the pilot’s cockpit enclosure with its long tail fairing. The cockpit has an impressive array of Kollsman (K.B.B.) instruments and the usual Sperry and Reid and Sigrist blind-flying equipment. Other features are the Hobson automatic carburettor controls and a unique tab control box in the roof, each knurled knob turning in the appropriate plane. The dual controls have been designed according to a patented system which makes for unobstructed leg room, the controls being taken from the sides rather than the floor.
Data are: Span, 73ft. 6in.; length, 44ft.; wing area, 826.5 sq. ft.; tare weight, 9,500 lb.; disposable load, 9,500 lb.; top speed at sea-level, 225 m.p.h.; top speed at 6,000ft., 235 m.p.h.; stalling speed, 67 m.p.h.; service ceiling, 20,000ft.; maximum range, 1,950 miles (still air).

CUNLIFFE OWEN AIRCRAFT, Ltd are continuing to develop high-wing mono planes of the “Flying Wing” type with a fuselage of aerofoil section and of simple construction as exemplified in the prototype, which has been flying for some time. The prototype development, known as the O.A. Mark II, is the subject of our illustration. The wings are of the two spar type, the spars consisting of T section dural extrusions for the booms, sheet webs and vertical stiffeners. The centre wing, or fuselage, has a maximum depth of 6ft. and is 15ft. 6in. wide. Twenty passengers can be accommodated. The tail booms are wide and deep enough at the roots to house a lavatory in one and a pantry in the other. The undercarriage is retracted hydraulically into the nacelles behind the two Bristol Perseus XIVC sleeve valve engines. A crew of four is provided for.
Data are: Span, 72ft.; length, 45ft. 2in.; total lifting area, 890 sq ft.; all-up weight, 19,600lb.; payload for maximum range, 2,820lb.; wing loading, 21.4lb./sq. ft.; top speed, 225 m.p.h.; economical cruising speed 185 m.p.h.; service ceiling, 20,000ft.; and range in still air, 1,985 miles. 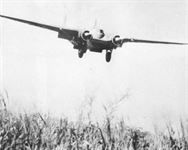 Seen here on its first test outing, the Cunliffe-Owen is now flying again on a second series of tests.

AERODYNAMIC ACCOMMODATION: The first of the new British Burnellis emerges from the Cunliffe-Owen Aircraft shops at Southampton for test flights. Bristol Perseus XIVC sleeve-valve engines, giving 900 h.p. each for take-off, are fitted. Among the new features is the control-cabin superstructure, which gives a good view abeam.
This view, secured on the occasion of the new transport’s first “airing,” gives an idea of the proportions and size.

This three-quarter rear view of the new Cunliffe-Owen transport shows the shape of the tail booms.

A photograph of the Burnelli Cunliffe-Owen Clyde Clipper in free French markings. The picture was taken in North Africa during the war when the aeroplane served as General de Gaulle’s personal transport. 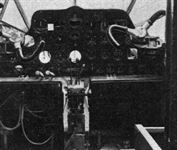 The cockpit (in a not-quite completed state), showing the way in which the controls are taken from the sides instead of the floor. 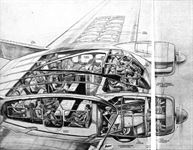 The general layout and accommodation of the new Cunliffe-Owen may be visualised from this specially prepared Flight drawing. The installation of the Bristol Perseus sleeve-valve engines is also evident.

The Cunliffe Owen O.A. Mark II should have a top speed of 225 m.p.h. when fitted with two Bristol Perseus XIVC sleeve-valve engines. The range is estimated at 1,985 miles.

Roominess is the main feature of the Cunliffe-Owen cabin.

STRUCTURAL FEATURES OF THE CUNLIFFE-OWEN TRANSPORT.