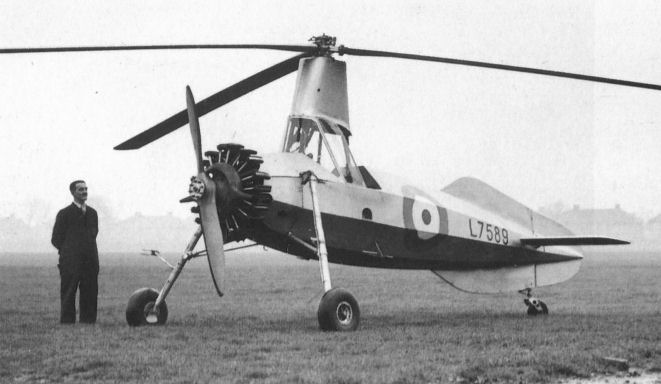 Up and Off
When watching the C.40 jump-start, one forms the impression that the acceleration must be quite unpleasant for the occupants. Actually, as the writer can testify from personal experience, this is not the case. The rate of pitch change in the new hub is such that, although the jump only lasts about two seconds, there is no unpleasant sensation. One feels as if a gigantic hand lifted one rapidly but quite tenderly some ten feet into the air. And the absence of "sink" at the end of the jump gives a feeling of great security.
In the air the C.40 appears to behave pretty much like the C.30. The rotor seems to be very smooth, and the way it "irons out'' the bumps is quite remarkable.
The landing is, of course, quite incredible, with no run at all. When the machine is handled by Mr. Brie there is no trace of a jar, although if the machine were allowed to sink on to the ground straight from the approach, it would probably strain things somewhat.
The results obtained in service with the Army and Navy C.40’s will be awaited with interest.

AT the moment the C40 Autogiro is not available to the public and, as the type is of special interest to the Air Ministry and Admiralty, no figures can be given. The C.40 is the production version of the experimental "jump start" models, and carries two people, side by side, in a semi-enclosed cabin. The machine both leaves the ground and lands without forward run, but, in the air, behaves like and is controlled in the same manner as the older C.30 type, with direct control.
Makers : The Cierva Autogiro Co., Ltd.. London Air Park, Feltham, Mddx.

THE latest Cierva Autogiro - the C.40 - ordered for the Army and the Fleet Air Arm, shows its paces, piloted by Mr. Marsh. The two pictures were taken from the same viewpoint, the upper showing the machine in position ready for the jump-start. On the lower it is seen clearing the tape. The engine is a 170 h.p. Salmson. This is the first jump-start two-seater Autogiro. The experimental C.30, on which the early tests were made, carried a pilot only.

The Cierva C-40 was built under licence by the British Aircraft Manufacturing Co. Powered by a 180 h.p. Salmson 9 NG radial, it first flew in 1930. 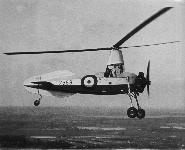 A pre-war photograph of the third C.40 Rota II, which was written off at Odiham in April 1940 after brief service in France. 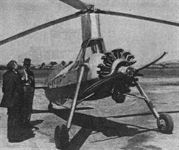 The C.40 Autogiro is considerably “cleaned-up,” as compared with the C.30, by a streamline casing around the upper part of the pylon and a windscreen of generous dimensions in front of the cockpit. In spite of side-by-side seating the machine looks slimmer than its predecessor.

A “differential tail” (incidence larger on one side than on the other) and a streamlined fairing on the rudder are features of the C.40. 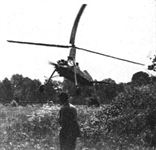 The machine is seen landing on a spot that would be quite inaccessible to an aeroplane.

Demonstrating the new C.40 Autogiro from suitably impossible country. In this photograph the machine has just left the ground from a point beside that where the spectator is standing.

The pictures tell the story of a landing and a take-off. On the left, the machine is about to touch down. The centre photograph shows it at rest, and by the building behind it can be seen that there was no landing run. In the right-hand view (joined to the other in correct relative position as regards the ground) the machine has just “jump-started" from the spot in which it landed. Note the forward tilt, which helps the forward acceleration. 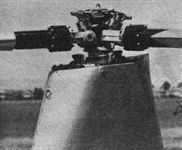 The rotor head of the C.40 is quite different from the “autodynamic.” The flapping hinges are outside the incidence hinges, and a single shock damper is placed in the centre of the head, connected by arms with the three rotor blades.
<<   0/0   >>