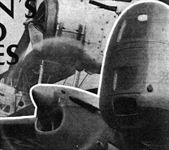 “LONG-NOSED BLENHEIM” is the somewhat inelegant though accurately descriptive nickname for this improved Bristol Blenheim bomber, which does 295 m.p.h. and has a cruising range of 1,900 miles. The engines are Mercury VIIIs and using 100-octane fuel for take-off. A machine of this type will be at the Paris Show, starting on November 25.

HUNDRED OCTANE: One of the Bristol Mercury VIIIs in the 295 m.p.h. “long-nosed” Blenheim introduced in this issue. Take-off output, on 100-octane fuel, is 920 h.p. 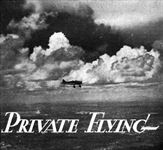 THE latest Cierva Autogiro - the C.40 - ordered for the Army and the Fleet Air Arm, shows its paces, piloted by Mr. Marsh. The two pictures were taken from the same viewpoint, the upper showing the machine in position ready for the jump-start. On the lower it is seen clearing the tape. The engine is a 170 h.p. Salmson. This is the first jump-start two-seater Autogiro. The experimental C.30, on which the early tests were made, carried a pilot only.

SEVEN YEARS AFTER: Flight makes no apology for publishing these outstanding pictures of a line-abreast formation by the Hawker Furies No. 43 (F.) Squadron. It was in 1931 that the squadron took delivery of its Furies, then the very last word in fighting aircraft, and still to-day exceedingly popular for aerobatics. Now, on the eve of re-equipment, the squadron shows once again the perfection of its flying with these beloved biplanes. Their new camouflage, with the white and yellow circles omitted, is of interest

TWO LINES OF FIGHTER DEVELOPMENT: The new Fiat biplane (below) is derived from the strong, manoeuvrable C.R.32 machine flown with such success in Spain. Above it is a new Macchi monoplane (fitted, like the biplane with a two-row Fiat with a maximum output of 840 h.p.) which, like all the new Italian fighter monoplanes, has been specially studied to provide good vision for the pilot.

TWO LINES OF FIGHTER DEVELOPMENT: The new Fiat biplane (below) is derived from the strong, manoeuvrable C.R.32 machine flown with such success in Spain. Above it is a new Macchi monoplane (fitted, like the biplane with a two-row Fiat with a maximum output of 840 h.p.) which, like all the new Italian fighter monoplanes, has been specially studied to provide good vision for the pilot. 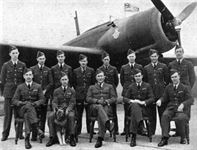 A side view of one of the long-range Wellesleys showing that the fuselage is comparatively short in relation to the wing span. The special cowling and fairing arrangements may be noted. 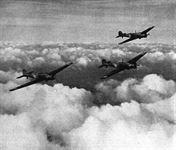 RECORD BREAKERS IN TRIPLICATE: The three Vickers Wellesley monoplanes (special Bristol Pegasus XXII) of the Long Range Development Flight which have added so much lustre to the name of the R.A.F. as a record-breaking service by eclipsing the world’s long-distance record.

THE LONG-RANGE WELLESLEYS at Ismailia before their record flight.

WORKS FERRY: This diesel-engined Ju.86 seen at Croydon recently is the property of Junkers Flugzeugwerke and is used for customary business travels by the staff - and, in particular, by the managing director.

Flight testing was carried out on a D.H. 89. The “L” shaped fittings carrying the wheel arms were used to preserve the present location of wheel and vertical struts. Such fittings will not normally be required. 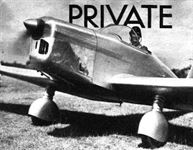 READY FOR SERVICE: The first of Imperial Air­ways’ D.H. Albatross series, Frobisher, arrives over its future home. The type will be used mainly on the London-Zurich service, where its high cruising speed should be appreciated.

The long-range D.H. Albatross, which will probably be the first machine to make serious use of both the Shannon Air Base and Collinstown, Dublin. 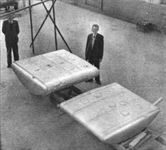 Two of the tanks for one of the long-range mail carriers acquired by the Air Ministry for trans-Atlantic work.

An artist’s impression of a cabin in the passenger-carrying version of the Albatross. Imperial Airways are having their own design of seat. 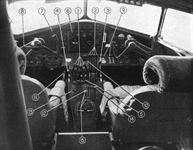 The Marconi radio installation on the long-range mail carriers. On the left is an AD 67 A transmitter and on the right the receiver with medium/short wave homing equipment.

In comparison with the majority of modern control-cabin layouts in transport machines, that of the Albatross is extremely tidy. Most interesting, perhaps, is the layout of the engine and airscrew control bank, the flap and undercarriage operating gear and the trimming cranks. The undercarriage switch may be seen on the panel below that for the Sperry automatic pilot, while the flap switch and the rudder and aileron trimming cranks are arranged, with their appropriate indicators, below the engine and airscrew control levers. On the control bank are, left to right, landing light control, throttle and mixture, constant speed airscrew controls and automatic pilot cut-out. The fore and aft trimming wheel is on the left of the control bank. In the centre of the first pilot’s control half-spectacle will be seen the brake control lever, which is shown in the locked "on" position; when moved to the right the system is “free.” 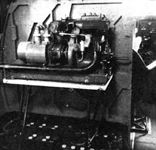 The little Stanley motor used for emergency wireless operation. This is exclusive to the long-range mail-carriers for the Air Ministry.

One half of the retractable undercarriage on a mail-carrying Albatross. When retracted the wheels are moved in the belly of the fuselage.

A makers’ representation of the speed efficiency of the Albatross in relation to its forerunner, the Comet racer. Particularly noteworthy is the reduction in engine drag.

A simple explanation of the cooling System employed for cooling the Gipsy Twelves on the Albatross. The air goes in the leading edge duct and is delivered to the engine from the rear, being exhausted through the adjustable outlet.

A detail sketch showing the nature of the fuselage construction.

The Gipsy Minor as installed in one of the D.H. Moth Minors now flying at Hatfield. This view shows the formation of the front of the air-scoop.

MODERN FORMULA: There appears to be a tendency even in the U.S. to return to the high-wing layout which has always been favoured over here. This photograph of a model gives a good idea of the lines of the new D.H. 95 all-metal medium-capacity civil machine, which should be making its first test flights early next year. 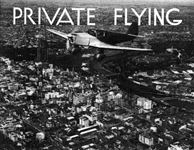 MOST OF MELBOURNE: The Percival Vega Gull which is used by the Shell Company of Australia, photographed when flying over the capital of Victoria. The distinctive colour scheme is interesting, though it makes a peculiar difference to the natural lines of the machine.

HALF-POWER: The Douglas D.C.4 flying on two engines; the other two have been stopped with the help of the full-feathering airscrews. In this form the D.C.4 has a ceiling of 11,000ft. on full load. Very shortly the machine will be taken over in turn by various American operators for service trials.

TRANS-CANADA: Last month the Trans-Canada Air Lines service was officially extended to cover the section between Montreal and Winnipeg. In this set of pictures there are three views of one of the ten Lockheed Fourteens which are now, with five Electras, in service, and two pictures of typical Canadian terrain. Here, are the San Juan Islands near Vancouver

A view of the Coast Range, near Seattle

One of the T.C.A.L. Fourteens is shown coming in to land with the large-area Fowler flaps in the down position.

Another scene at Winnipeg, with a Fourteen being refuelled. The transparent nose, enclosing the D/F loop, is an interesting feature. Without such an arrangement it would be necessary for this loop to be outside the fuselage, which is otherwise metal-covered.

TRANS-CANADA: Last month the Trans-Canada Air Lines service was officially extended to cover the section between Montreal and Winnipeg. In this set of pictures there are three views of one of the ten Lockheed Fourteens which are now, with five Electras, in service, and two pictures of typical Canadian terrain. Here is a Fourteen taking on mails at the Winnipeg terminal.

Marconi radio in a British Airways Lockheed Electra. On the left is the short-wave receiver, and on the right the medium-wave and D.F. receiver, with remote control for the external loop.

A makers’ representation of the speed efficiency of the Albatross in relation to its forerunner, the Comet racer. Particularly noteworthy is the reduction in engine drag.

PRIVATE PURSUIT: A 330 m.p.h. conveyance for yourself and a friend or two on 1,200 h.p. and a retractable tricycle. The Seversky Executive, a development project of the well-known military types. No sign of any cooling aperture for the Twin Wasp - unless it is designed with the nose-slot N.A.C.A. cowling.