TO the designs of Mr. D. M. K. Marendaz, known to motoring enthusiasts as the designer and manufacturer of Marendaz Special cars, a low-wing ДальшеMore>>> two-seater cabin monoplane is being built at Maidenhead. Mr. Marendaz was a war-time pilot and has had experience as a racing driver. Construction of the machine is well in hand.
Complete particulars are not yet available, but the company believes that, due to the machine's simplicity, comprehensive equipment and side-by-side dual control, it will appeal not only to the private owner of moderate means, but also to schools. It is being designed to conform with the Air Ministry's aerobatic requirements.
The fuselage is of semi-monocoque construction, and is wide enough, it is claimed, to provide accommodation equal to that in an Austin Seven car. What engine will be specified as standard has not yet been revealed. Flaps, landing light, differentially operated brakes (patents pending) and undercarriage springing by torsion shaft (patents pending) are features. The price, completely equipped, will be ?650.

BRITISH car manufacturers are particularly skilful in building that most desirable vehicle, the sports saloon. That, in fact, is the designation one might give to the Marendaz two-seater cabin monoplane now being built to the designs of Mr. D. M. K. Marendaz, known to motoring enthusiasts as the designer and manufacturer of the Marendaz Special cars.
Mr. Marendaz claims that the semi-monocoque fuselage of his monoplane - which will have side-by-side seating - will provide accommodation equal to that in an Austin Seven car. The engine is likely to be a Pobjoy, conferring a maximum speed of 138 m.p.h.Flaps, landing light, differentially operated brakes and undercarriage springing by torsion shaft will be standard features, and the price, completely equipped, will be L650. The machine has been designed to conform with the Air Ministry’s aerobatic requirements.
The main data are:: Span, 28ft. length, 21ft. 5in.; weight empty, 821 lb.; disposable load, 550 lb.; cruising speed, 120 m.p.h.; landing speed, 45 m.p.h. Makers: Marendaz Special Cars, Maidenhead, Berks

Making its public bow: The Marendaz Mark III, not quite finished but looking eager to go somewhere quickly. It seats four, and the motor is a Gipsy Six.

MARENDAZ MARK 3. Built by International Aircraft and Engineering Ltd., at Barton, Beds, the Marendaz was designed in two versions, the Mks. 3 and 4. The Mark 3 shown here was a 3 four-seat with a Gipsy Six and the Mk. 4 a two-seat with a Gipsy Major. Special type slots and flaps were fitted, as well as a retractable undercarriage. The Marendaz Mk. 3 had a span of 31 ft. and length 26 ft. The Marendaz Mk. 4 would have had the same dimensions but the undercarriage was fixed. Neither the Mk. 3 or 4 ever flew, it is believed. This photograph was taken at the R.Ae.S. Garden Party at Heathrow on 8th May, 1938.

The semi-monocoque fuselage and tail unit of the Marendaz monoplane.

A two-seater cabin machine now in the process of being built - the Marendaz, which is likely to be fitted with a Pobjoy engine. 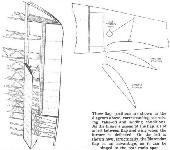 Three flap positions are shown in the diagram, corresponding to cruising, take-off and landing conditions. As the hinge is ahead of the flap, a slot is left between flap and wing when the former is deflected. On the left is shown how, structurally, the Marendaz flap is an advantage, as it can be hinged to the rear main spar.

A plan view of the International Aircraft monoplane, showing location of the Marendaz flap and aileron.