A NEW SPORTS MODEL
The Comper "Kite" is a two-seater version of the Comper "Streak," but is being produced in response to numerous requests for a two-seater "Swift"

RARELY if ever in the history of flying has the secret of a new aircraft type been so closely guarded as that recent maintained by the Comper Aircraft Co., Ltd., of Heston. Usually, some sort of rumour leaks out, and quite a number of people know when an aircraft firm is about to bring out a new model. In the case of the Comper "Kite," the announcement has come as a complete surprise, and the "Streak" with which Flt. Lt. Comper will challenge the French constructors for the Coupe Deutsch was generally looked upon as the latest Comper type. Hot on its heels now follows the "Kite," which is in effect a two-seater version of the "Streak." The manner in which the firm came to decide on the production of the "Kite" is interesting and deserves to become known.
Although a fairly large number of Comper "Swifts" were built and sold, it gradually became evident that no single-seater, no matter how appealing in its flying characteristics, would ever command a very large sale - certainly not one running into hundreds. One has often heard it stated that the "Swift" was an extremely nice little machine, but the admission was usually accompanied by the wish that Comper would produce a two-seater "Swift." If one thinks of the general lay-out of the "Swift," it at once becomes obvious that to turn it into a two-seater would be almost impossible. The high-wing arrangement, with the fuselage "hump" supporting the centre of the wing, precluded any sort of arrangement in which the passenger could get a reasonable view and fairly easy access to his cockpit. From a weight-carrying point of view, the "Swift" would have carried the equivalent of another person easily, even remaining in the "Acrobatic" category while doing it. But space was the difficulty.
Then Mr. Comper produced the "Streak" as an out-and-out racing type. With the exception of the initial wing flutter, which came as a complete surprise in view of the great stiffness of the wing, and which has since been completely cured by fitting ailerons of narrow chord and provided with mass-balances, the "Streak" proved to have quite remarkably good flying qualities. Not only is the speed excellent for the power of the engine fitted, but the controllability and manoeuvrability are far better than would be expected in a racing type, while the take-off and landing resemble those of an ordinary touring machine.

With the demand for a two-seater "Swift" in mind, and with the high performance and general handiness of the "Streak" an established fact, the decision to introduce the "Kite" was a logical one. The more difficult type, the racer, had already been found to have good qualities. The low-wing arrangement lent itself very readily to the addition of a second seat. The chain of argument was complete. The only point to be settled was the choice of engine. Because of its low specific weight, and with very good service of the "R" type in many "Swifts" in mind, the choice fell on the new Pobjoy "Niagara" of 90 h.p. The "R" engine, it will be recalled, was fitted in "Swifts" which made some famous long-distance flights, such as England-Australia, England-Cape Town, Madrid-Manila, and twice over the Andes mountains. The Comper company is so satisfied with the running of the "Niagara" that it expects equally good results from it in the "Kite."
Having followed the logical steps which led to the introduction of the Comper "Kite," we may devote a little attention to the features which promise to make it a very popular type as soon as it is on the market. High performance is the first notable characteristic. The performance figures are, of course, at present the calculated figures, but in the past Flt. Lt. Comper has not been very far "out" in his estimates, and the fact that the machine so nearly resembles the "Streak" should be a further reason for close prediction. With a maximum speed of 155 m.p.h. (250 km/h), it is estimated that the cruising speed will be about 140 m.p.h. (225 km/h). That the "Kite" will be a useful as well as fast sports type is indicated by the fact that with full load of pilot, passenger and luggage, the range at cruising speed is calculated to be some 700 miles. This range should be ample for the requirements of most owners, and will allow of quite long flights against strong head winds. With a tare weight of 670 lb. (304 kg.) the gross weight will be approximately 1,200 lb. (544 kg.), so that the ratio of gross to tare weight is 1.76, the machine carrying 76 per cent, of its own weight as disposable load.
In general construction the "Kite" will be identical with the "Streak" described and illustrated in FLIGHT of April 19, 1934. The only exception will be the nose portion of the fuselage, which will be extended to take the Pobjoy "Niagara" engine. The passenger will sit approximately over the centre of pressure, so that the trim will not be affected.
Our general arrangement drawings show the lines of the "Kite," and also the main areas. An impression of how the machine will look when flying is given on page 462. No illustrations and no figures can give a real impression of how the machine will handle, but the behaviour of the "Streak" promises well for the new sports type, the first appearance of which will be awaited with interest.

Early this year (in Flight of May 10, 1934) we gave the first details of this new sports model, which has been produced by the Comper Aircraft Co., Ltd., of Heston. The one which Flt. Lt. E. H. Healy is flying in the race has been entered by Sir Norman Watson, the chairman of the company, and, in view of the present demand for a high-speed touring machine which is both light and cheap, its performance will be watched with particular interest. Basically, it is a two-seater version of the Comper "Streak" which Flt. Lt. Comper flew in the Coupe Deutsch, and is also flying in the King's Cup Race; but, whereas the latter machine has the ''Gipsy Major'' engine, the "Kite" will be powered with the new Pobjoy "Niagara." Structurally, the "Kite" is very like the “Streak” - that is to say, the fuselage is of spruce with strut bracings, and fabric-covered, while the wing, which also is mainly of timber, is ply wood-covered. Both the "Kite" and "Streak" will, of course, be in the "aristocratic'' class of machines having retractable undercarriages. The two wheels are mounted in pyramids of steel tubing, pivoted near the front spar of the wing, and interconnected by a tube across the fuselage. When in the retracted position, the two wheels are swung upwards and backwards about this pivot, coming to rest when somewhere about a quarter of the wheel remains exposed beneath the lower surface of the wing. Designers are by no means yet unanimous as to whether this is the best arrangement, or whether the fully retracted wheel is to be preferred. The adherents of the former system maintain that theirs is the best, because a fast, fairly heavily loaded aeroplane can, in a case of emergency, be landed on rough ground with the wheels retracted without any fear whatsoever of the machine turning over. This has been proved in practice, and has been done without any damage to the machine other than bending the metal airscrew.

The Streak shortly after roll-out at Heston in April 1934.

CLEAN LINES: The "Gipsy Major" engine of the Comper "Streak" has been very cleanly faired in, but the cowling at the same time provides adequate cooling. Another view of the Streak before the addition of mass-balances.

J. Graham, Comper works manager, surveys the Streak, with Comper sitting in the cockpit, at Heston in April 1934.

THE COMPER "STREAK": In a recent issue of "Flight" we reported that a certain amount of aileron flutter had arisen. By giving ailerons a very narrow chord and fitting mass-balances, as indicated by the illustration, the trouble has completely disappeared. 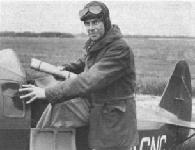 Flt Lt Nicholas Comper at the age of 36, about to demonstrate the Streak for Flight’s photographer. 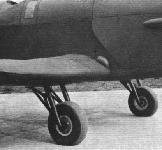 This Comper Streak, which has a retractable undercarriage, may be the fastest machine in its class. It is to be flown by P. de W. Avery (No. 8).

The Streak demonstrates its smart take-off capabilities at Heston.

The Streak, bearing civil registration G-ACNC, makes a low flypast at Heston in April 1934 for the benefit of Flight’s photographer. Note how the retracted wheels protrude, and the glazed panel just below the windscreen affording the pilot additional vision forward and downward.

The Streak at the time of the 1935 King’s Cup race. Note the addition of undercarriage doors - presumably an attempt to coax extra knots out of the racer.
Kite

A COMPOSITE PICTURE: Showing how the "Kite" will look when flying.

NEW SEATING ARRANGEMENT: The additional bay to carry the new engine mounting for the Pobjoy "Niagara" is also shown.

DESIGN AIDS TO SPEED (4) Shows how Flt. Lt. Comper arranges the aileron balance and pilot head on the wing tip of his "Kite." 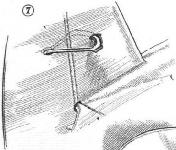 DESIGN AIDS TO SPEED (7) On the rudder of both his "Streak" and "Kite," Flt. Lt. Comper arranges the mass balance as an arc working through a slot in the fin. 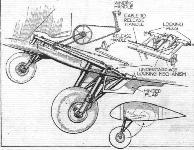 COMPER'S UNDERCARRIAGE: Both the Comper "Streak" and the new Comper "Kite" have their undercarriages retracted straight back by mechanical means.