DURING the past year or two there have been a number of attempts to produce a machine which will ДальшеMore>>> be both cheap to manufacture and easy to fly. It seems that one or two of them may even yet succeed in weathering the storm of criticism and in crushing the wall of simple conservatism. Nowadays, with the certainty that, under the Air Guard scheme, the clubs will shortly be receiving additional financial assistance, the outlook for the patient manufacturer of a really good light-weight is much more rosy.
In his new machine, which, in prototype form, is well on its way towards completion at Brooklands, Flt. Lt. Nicholas Comper has endeavoured to produce something which is not only cheap in first and later costs, and practical in performance, but which has as many strong points as possible in its favour as a device for primary training and early solo flying. Furthermore, it is modern in conception in that it is a pusher with a three-wheeled undercarriage - though the latter may not be fitted to the production type until civil and Service training establishments are quite ready for the tricycle cult.
Although in detail construction the Comper Scamp, as it is known, is simple and conventional, quite a number of ingenious features are incorporated in the design as a whole. For instance, the primary structure consists of two keel members which take all the loads and to which the tail-carrying booms are attached to form continuations. At right angles to these keel members is another which forms the second part of the basic structure and has a number of important uses. This member, which is curved downwards on either side of its centre point, carries the undercarriage. It is, at the same time, a stub wing giving a certain amount of lift, and its ends form the “take-off” point for the wing strut attachments so that a much more satisfactory angle is obtained for these struts. The keels, of course, carry the engine mounting and centre-section superstructure as well as the cabin, which, as it is not part of the structure, can be designed for maximum view and convenience.
The undercarriage itself is both simple and cleverly conceived. The wheel axles are attached to what may be considered as the wing tips of the stubs. These tips are hinged at the top and are held at the bottom by shock-absorber cord. When the machine is on the ground this cord is to some extent stretched and the stub tips are out of line with the stub wings themselves. When, however, the machine is airborne these tips become, aerodynamically, extensions to the stubs, so that in one fell swoop a great deal of the undercarriage drag, as such, is removed. It will be realised that the downward droop in the stub member is sufficiently pronounced to give ample ground clearance, yet not so that its aerodynamic qualities are impaired. The nose-wheel is of the simple castering type. Other than a movement in the position of the stub mem­ber, no structural changes will be involved in conversion to conventionality in the matter of undercarriage arrangement.
The booms carry a cantilever tail-plane and a single central rudder, which, lying as it does directly in the slip-stream, should provide ample control on the ground. The booms themselves are laminated to provide the necessary curve and are the only parts of the structure which may be considered in the least expensive to produce. The two-spar wing, with ply-covered leading edge, is absolutely conventional and is similar in construction to that of the Comper Swift. The section is N.A.C.A. 23012.

Flt. Lt. Comper has chosen the high-wing arrangement not only because it is more suited to a pusher design, but also because this arrangement is, in itself, a guarantee against vicious qualities. The pusher scheme was selected mainly because of the good view obtainable and because of its advantages in dual instruction. Additionally, however, if the Scamp is ever considered as a primary trainer for more serious military and civil flying, the pupil will, through it, have become accustomed from the very start to the idea of flying without a pronounced datum line.
The first machine, which is at present being built by the students of the College of Aeronautical Engineering at Chelsea and Brooklands (and providing really creative instruction for them) is a single-seater and will be fitted with a Praga B flat-twin. The two-seater production type, which is being built concurrently, will probably be fitted with a Walter Mikron straight-four in its prototype form, while later machines will be fitted with a British engine of similar power. If the production machines are constructed as well and as carefully as the initial single-seater there will be nothing about which to grumble. As for maintenance, the Swift has as good a reputation as any other civil type to be built, and a similar record can be expected for the Scamp. Incident­ally, the single-seater is being built to the special order of Capt. Fane, who ordered the very first Pobjoy-Swift; it will be remembered that the original Swift was fitted with a flat-twin Scorpion.
The two-seater will have a span of 30 ft. and an overall length of 18 ft. 9 in. Every part which has so far been built has proved itself under test to have a more than ample factor of safety, and the weights are coming out according to calculations. Performance figures have not yet been released, but the idea behind the design is to produce a machine with an exceptionally good take-off and climb, yet one possessed of a useful cruising speed. There seems to he no reason why it should not be possible to make and to sell the machine at the figure of £400.
The initial test flight will be made at Brooklands by Flt. Lt. Comper, and Capt. Duncan Davis will continue the good work so that the machine, in its final form, will be what is wanted from the instructional point of view. Now that the Civil Air Guard scheme has been publicly announced, one can also say that the design shows intelligent anticipation.

INGENIOUS design might be expected in a machine from Flt. Lt. Compels drawing board. Many years ago he produced one of the most successful and pleasant single-seaters, and recently he has been working on a new type for primary training. In this, which is known as the Scamp, every effort has been made to provide a type which will be as nearly fool-proof as possible, and which, at the same time, will be cheap to manufacture.
The Scamp is a high-wing pusher with a tricycle undercarriage, and the prototype is being made, in single-seater form, by the College of Aero­nautical Engineering at Brooklands. This will have a Praga engine, but the two-seater production model will probably be fitted with a Mikron.
As an example of ingenuity in design, the primary structure consists of two keel members which take all the load and to which the tail booms are attached. Another member lies transversely across this and is curved down on each side in stub wing form tn take the undercarriage and the wing struts. The axles are attached to what may be described as the wing tips of the stub. The two longitudinal members carry the engine mounting and centre-section superstructure, as well as the cabin, which is designed for maximum view and convenience. At the nose is a simple castering wheel.
Performance figures have not yet been released, but the two-seater will have a span of 30ft. and an overall length of 18ft. 9in. It is hoped to sell the machine for about /400.
Makers:- Flt. Lt. Nicholas Comper, 2, The Ridgeway, Walton Bridge, Walton-on-Thames, Surrey. (Tel.: Walton-on-Thames 282.)

Bob Williams’ photograph of the scaled-down Comper Scamp, the CF-1, poses a problem. The serial number T1788, clearly visible on the boom, was supposedly allocated to the Fane AOP. It is therefore doubtful if the Fane was ever allocated these marks, although they could have been transferred to it when the CF-1 was abandoned. Can anyone sort out this confusion?

A good idea of the general appearance of the Scamp may be obtained from this suitably modified photograph of a model of the single-seater prototype.

The undercarriage of the Scamp is ingeniously economical both in cost and head-resistance. This sketch shows the way in which the movement and springing is arranged. The stub layout as a whole will be seen in the general arrangement drawing on the previous page. 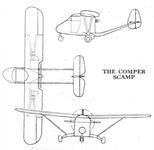 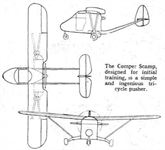 The Comper Scamp, designed for initial training, is a simple and ingenious tri­cycle pusher.
<<   0/0   >>