THE VICKERS "VENDACE”
An Efficient Land or Sea Training Biplane

Vendace оснащался двигателем Rolls-Royce Falcon III мощностью 275 л. с. и конструктивно представлял собой вполне традиционный биплан со складывающимися крыльями одинакового размаха и двумя открытыми кабинами.
The Vickers "Vendace" (Rolls-Royce "Falcon") Designed to the same specification as the Blackburn "Sprat," the Vickers "Vendace" is a two-seater training machine capable of being used either as a seaplane or as a land aeroplane. It. was designed by Mr. Rex Pierson, chief designer to Vickers, Limited, among whose famous machines is numbered the "Vimy" on which Sir John Alcock flew across the Atlantic, in 1919. Being intended for training purposes the "Vendace" has a fairly large wing area, with the result that the stalling speed is extremely low. The wing strutting arrangement is somewhat unusual, there being but one strut (on the front spar) in the inner bay.

The Vickers "Vendace" has been flying quite a lot at Brooklands recently. This view shows it flying overhead. 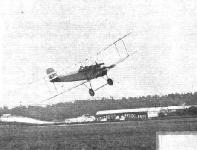 The Vickers "Vendace" ("Hispano F.8"). (As acquired by a South American Government for Advanced Training).

VICKERS MACHINES FOR SOUTH AMERICA: Three views of the "Vendace" advanced training machine, in flight. Fitted with a 330-h .p. Hispano 8F engine, this is the first machine of a batch which Vickers are supplying to a South American Government. 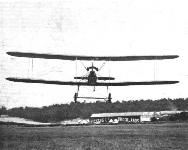 This Vickers "Vendace" two-seater - flying low over Brooklands - is of course doped with Cellon. Vickers (Aviation) Limited, like most of the great aeronautical firms in this country and abroad, standardise Cellon Dope for all machines. 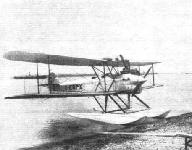 The Vickers "Vendace" (A.D.C. "Nimbus"). (As acquired by the Aircraft Operating Co., Ltd., for Duty in South American Air Surveys.)