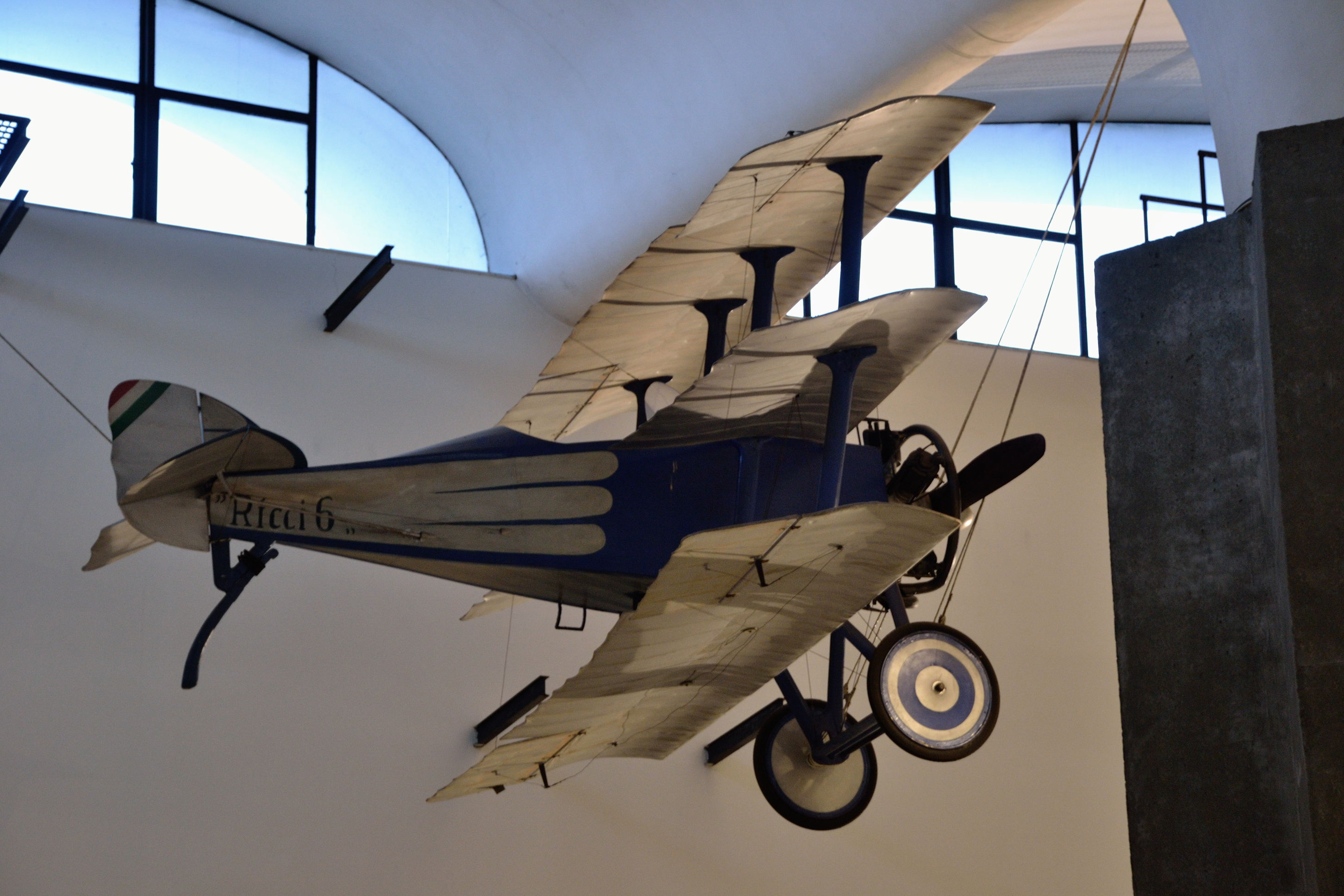 IN the absence of the de Pischoff-"avionettes" at the Show, the two triplanes exhibited by the Italian firm were the smallest power-driven aeroplanes in ДальшеMore>>> the Grand Palais. Designed for cheap production and low cost of upkeep and running, they possess features with which one is not altogether in agreement; but, as the old saying has it, the proof of the pudding is in the eating thereof, and we are informed that one of these machines has been stunted extensively, and that no sign of structural weakness has been traced. In spite of the appearance of weakness noticed in certain respects it may be that the structural members in question are really sufficiently strong, bearing in mind that the machines are extremely light and of relatively low power.
Generally speaking, the two machines are very similar. Apart from certain differences in dimensions, the two types are distinguished chiefly by the engines fitted. The type "R.6," which is a single-seater, has a 35-40 h.p. Anzani radial, while the "R.9" is fitted with one of the small nine-cylinder le Rhone engines of approximately 50 h.p. The fuselage of both types is of rectangular section in front, but runs off to a triangular section towards the tail.
The triplane wings are chiefly remarkable on account of their being fitted with single spars only. While this is probably quite sufficient for direct bending loads, one is not so certain about the question of torsion with travel of the centre of pressure. The manner of attaching the single inter-plane I-struts to the spar is shown in one of our sketches. The metal shoe is of very light gauge indeed, but it is relieved to a certain extent of some of the torsional load by the fairly long "foot" of the strut, which runs a considerable distance out, both fore and aft, along the wing rib. The wing bracing is of piano wire, and certainly the wing structure is of the simplest and cheapest type possible. The ribs are not unlike those of the old Caudrons, i.e. with the front portion double surfaced, and the trailing edge flexible, and with, the ribs housed in pockets in the wing fabric. We are informed that on sand tests the wings have shown a factor of safety of 8-5 in the case of the "R.6" and 9 for the "R.9." If the tests were carried out in such a manner that a torsional stress was produced, as well as a direct bending stress, these figures would certainly appear to indicate that the structure is amply strong, and, as already stated, the machines are said to have been put through all sorts of stunts without sustaining any damage.
The main characteristics are as follows :-
Type "R.6." Type "R.9."
Engine 35-40 h.p. Anzani 50-60 h.p. le Rhone.
Length over all 12 ft. 4 ins. 16 ft. 5 ins.
Span 11 ft. 6 ins. 14 ft. 9 ins.
Height 7 ft. 6 ins. 7 ft. 10 ins.
Wing area 118 sq. ft. 140 sq. ft.
Weight empty 330 lbs. 440 lbs.
Useful load 240 lbs. 350 lbs.
Weight loaded 570 lbs. 790 lbs.
Wing loading 4-85 lbs./sq. ft. 5-6 lbs. /sq. ft.
Power loading 14 lbs./h.p. 13-2 lbs./h.p.
Maximum speed 90 m.p.h. 96 m.p.h.
Landing speed 28 m.p.h. 34 m.p.h.
Duration 3 hrs. 3 hrs.
Both machines can be converted into seaplanes by substituting small floats for the wheels. The floats are attached to the same undercarriage, so that the conversion is very quickly carried out. Finally it may be stated that the price quoted is 25,000 lira for the "R.6" and 35,000 lira for the "R.9," equivalent at the present rate of exchange to L270 and L380 respectively. These figures are certainly attractive, and there should be a considerable market for machines with such a good performance at so reasonable a price. 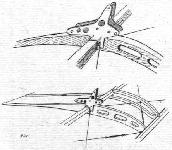 THE RICCI "POPULAR" AEROPLANES: Details of the single-spar strut attachment.