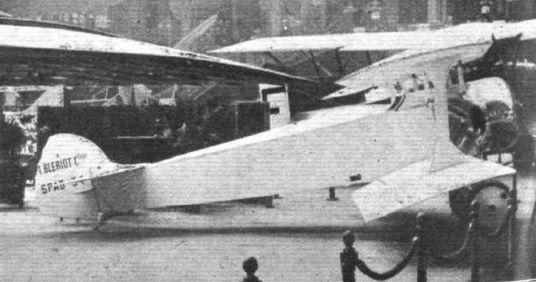 Two more complete aeroplanes are exhibited on the Bleriot stand. One of these is a Berline, exactly similar to those used on the London-Paris ДальшеMore>>> route. As this type was fully described and illustrated in our issue of July 7, 1921, we need make no further reference to it here. The second machine is a neat little side-by-side school machine with dual controls This machine is known as the Spad type 34. It is fitted with an 80 h.p. Le Rhone engine, and is similar to other Spads except that its fuselage is of rectangular section instead of the usual Spad monocoque construction. The wings show the same sweep-back of the top plane, and the same single I-strut on each side. The question side-by-side or tandem was a vexed one years ago, and it is interesting to see a modern designer choose the former. It is claimed that with this arrangement the pupil can obtain a better idea of how the instructor handles the machine; while sitting in the same cockpit has the advantage of doing away with the practice of knocking the pupil on the head with a spanner when he makes a mistake. Otherwise this machine does not appear to call for any special comment. Its main characteristics are as follows: Engine, 80 h.p. Le Rhone; wing area 226 sq. ft.: weight, empty, 1,050 lbs.; weight of fuel, 154 lbs.; useful load, 400 lbs.; weight, fully loaded, 1,604 lbs.; weight per sq. ft., 7-3 lbs.; weight, per h.p. 20 lbs.