THE PEYRET TANDEM MONOPLANE
Details of the Winning Machine

The Winner: Bringing the Peyret monoplane up to the top of Firle Beacon. 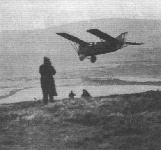 Before the beginning of the Light 'Plane Movement, a glider meeting was held at Itford Hill in Sussex. This was won by a Frenchman, M. Maneyrol, who is seen here during his flight of more than three hours.

THE START OF A FAMOUS FLIGHT: M. Maneyrol's Peyret monoplane gets away on October 21 for its record flight.

NEAR THE FINISH: Our photograph shows the Peyret monoplane and Sqdn.-Ldr. Gray's "Brokker" in the air together. Inset, another view of the Peyret. As the machines approached one another the two pilots would wave a cheery greeting and then drift apart once more. In spite of the darkness the machines did not appear to be in any danger of colliding.

The Winner: M. Maneyrol, in the cockpit of his machine, photographed at Selfridges, where the Peyret monoplane is on view this week. Behind the machine may be seen Lieut.-Commander Larrouy, manager and interpreter to M. Maneyrol. Inset, M. Louis Peyret, who designed and built the winning machine.

THE PEYRET MONOPLANE: Diagrammatic representation of the control system, by which the wing flaps are used as combined ailerons and elevators.

THE PEYRET MONOPLANE: Some constructional details. 1, View into the cockpit, showing controls and position of air speed indicator. 2, The differential control by which the flaps are operated as combined ailerons and elevators 3 and 4, Details of the wing bracing strut attachments. 5, One side of the undercarriage. The wheel has been omitted for the sake of clearness. 6, Front wing roots on fuselage. 7, Details of spar attachment to fuselage. Note metal-faced ply-wood wing roots, and quick-release bolts.