The first Dumbo in flight with near-maximum wing incidence and with slots open and flaps down.

Another view of the first Dumbo, shown after modification with a taller fin and rudder, flying with a large angle of wing incidence. Note the shadow cast on the aircraft's nose by the wing leading-edge slats. 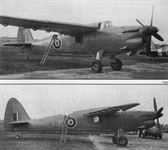 Two views of the second Dumbo.

The Dumbo had foldable wings for ship stowage. The wing covering of R1810, illustrated, was diagonal plywood planking. The second aircraft, R1815, had wings covered in aluminium-coated duralumin.

The incidence-changing gear in the Supermarine 322. Alternative hand and electric operation was provided.

A diagram of the Dumbo's incidence gear. Alternative hand and electric operation was provided. 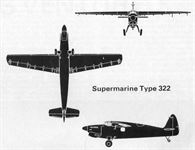