One of the minor tragedies in connection with the 1926 Lympne meeting has been the mishap to the Pobjoy engine which was to have been fitted in one of the two Cranwell biplanes entered. This engine, which develops a maximum of 63 b.h.p. for a weight of only 100 lbs., was being type tested at Farnborough when a certain part broke. The breakage was in itself quite a trivial affair, and should not be in any way due to the very high power-weight ratio of this engine. It was, however, sufficient to prevent the engine from passing its type tests in time for the competition, and, consequently, the machine in which it was to have been fitted has had to be scratched. This is all the more regrettable as there is every reason to believe that with the Pobjoy engine the C.L.A. 4 would have been in a position to obtain a very high ratio of useful load to fuel consumed. The engine is very economical, and the fact that it is of the geared type should have enabled the machine to do the get-off test quite easily, owing to the good propeller efficiency that might have been counted upon.

The second Cranwell machine, identical with No. 11, except for its engine, entered by the Cranwell Light Aeroplane Club, was described and illustrated in FLIGHT last week, and there is thus no need to give a detailed reference to it here. Suffice it to point out that the machine is chiefly remarkable for the fact that its top plane is of smaller span and chord than those of the bottom plane, a biplane arrangement not usually seen on British machines, although fairly frequently on Italian biplanes. The reasons for the arrangement, in the case of the Cranwell machine, are that it gives a good view from both cockpits while structurally it is advantageous on account of the shorter free length of top spar which it gives.
The C.L.A. 4 was designed by Flight-Lieut. N. Comper, and built by members of the Cranwell Light Aeroplane Club. It will be piloted in the competition by its designer, and all wish this plucky amateur effort every success. The transference of the Boys' Wing from Cranwell to Halton may seriously affect the future of the club, and we understand that Lieut. Comper is being transferred to the Felixstowe air station. Perhaps, however, one may hope for an amalgamation of the Cranwell and Halton clubs.

The C.L.A.4A G-EBPB apparently engined with an ABC Scorpion in place of the Bristol Cherub.

One of the "Eliminated": The Cranwell C.L.A.4 biplane damaged an undercarriage and was refused permission to repair. It is therefore out of the competition.

The flying view shows the C.L.A.4A being put through its paces at the 1926 Lympne Trials.

The inverted sesquiplane layout of the C.L.A.4A is well shown here.

THE RACE FOR THE GROSVENOR CHALLENGE CUP: No less than 21 machines faced the starter for this race, a record number. The result was that machines frequently got bunched together at the turning points. Our photograph show one of some such incidents. In 1 are seen the D.H. 53, the Farnborough "Cygnet," and the Cranwell biplane approaching the aerodrome turning point.

FINISH OF WINTON HANDICAP: In the lead is Ragg on the Farnborough Hawker "Cygnet" flying low. He repeatedly flew between the white rails and the enclosures. Behind him is Comper on CLA4. In the original photograph four more machines can be seen in the background, approaching the finishing line.

"Like Old Nick": Comper on the C.L.A.4 crossing the finishing line very low.

C.L.A.4 at the Orly meeting in September 1928, where it sustained damage to the undercarriage

FOLDING TESTS AT ORLY: Our machines showed superiority in the folding tests at the French Light 'Plane Trials. (5) Flight-Lieut. "Nick" Comper carries on in spite of his disheartening troubles with the C.L.A.4

View of the C.L.A.4 G-EBPC, which was to have been fitted with the Pobjoy P engine. Instead, it was powered by a 36 h.p. Bristol Cherub III.

C.L.A.4 at the Orly meeting in September 1928, where it sustained damage to the undercarriage

The sole surviving Cranwell C.L.A.4, thought to incorporate parts of G-EBPC. By April this year the restored airframe was ready for recovering. 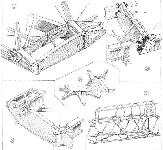 THE CRANWELL C.L.A. IV: Some constructional details: 1, The lower plane wing roots built into the fuselage. The bottom longeron is shown broken away behind the rear spar so as to show better the metal fitting, and between the spars this longeron passes just inside the inner rib. The rear undercarriage strut is attached to the front spar attachment. The hinges for folding the wings are also shown. In 2 is illustrated the inner end of the starboard lower plane, with hinge fittings, etc. The solid rib is partly broken away to show the form of the drag bracing clip. 3 illustrates the special rib and sheet steel fittings for the inter-plane I-strut on the lower plane. This strut slopes inwards, the sketch being viewed from outside the strut attachment. The spar is broken away to show the details of the special metal fitting for the attachment of the strut. The form of construction employed in the rear portion of the fuselage is illustrated in 4, while 5 shows details of this construction, the actual joint shown being on the lower longeron and viewed from inside.