The de Havilland "Moth" is already so well known to our readers as to make a detailed description of the machine quite unnecessary. It has been in use, in its original form as fitted with the A.D.C. Aircraft "Cirrus" engine, by the various light aeroplane clubs for well over a year, and in its capacity as a school machine has proved itself thoroughly reliable and robust, qualities of the very greatest value in school work, where machines often receive treatment of none too gentle a character. There is, however, a very great deal of difference between a machine designed for hard school work and one designed for some very special purpose, such as a competition.
Exactly how the de Havilland designers have done the trick we are not certain, but the figures given in the table indicate that the "Moth" as fitted with the "Genet" engine should stand a very good chance in the competition. The empty weight of the machine is 720 lbs. The weight of petrol and oil is 105 lbs. approximately (12 gallons of petrol and 2 gallons of oil). The point-scoring useful load is no less than 725 lbs., so that the machine has a ratio of empty weight to total loaded weight of 0-464.
In the earlier part of our Lympne supplement we referred to the efficiency of the 1923 light 'plane single-seaters, pointing out that the figure for "ton-miles per gallon" which they represented was 5-86.
The useful load is 725 lbs., and to obtain a mileage of 1,875 lb. miles per lb. of fuel the consumption for the total distance of 1,964 miles would have to be 760 lbs. of petrol, or, taking petrol as weighing 7 lbs./gallon, 108-5 gallons. This would represent a mileage of 18-1 miles per gallon. Such a mileage will not be easy to obtain, but we should hesitate to say that it is impossible.

Making Quite Sure: Professor Low sealing the tank of the de Havilland "Moth."

THE LANCASHIRE AIR PAGEANT: The Avro "Avian" and the de Havilland "Moth," both with "Genet" engines, starting neck-and-neck in the Open Handicap.

THE START OF THE COMPETITION: Some of the competing machines on Sunday morning at the start for Brighton. 2, Broad wastes no time on the de Havilland "Moth."

A "Genet-Moth" performing the unusual stunt of "skating" across the aerodrome on the side of its fuselage.

One of the Genet-Moths inverted during one of its climbing rolls in the course of the same remarkable performance by Flying Officers Boyle and Atcherley.

ELIMINATING TRIALS: In the lower photograph the de Havilland "Moth" is seen doing its get-off test, while on the right the same machine is seen in the landing test. Note the mechanic standing up to act as "air brake."

EMULATION: (Left) The two Genet-Moths piloted by Flying Officers Boyle and Atcherley in opposite positions; and (right) performing their remarkable slow rolls very low across the Blackpool aerodrome.

The Genet Moth Display Flight of the CFS takes off at the Hendon RAF Display on July 2, 1927, with J8818/G-EDCA leading.

THE BIRMINGHAM AIR PAGEANT: The first R.A.F. event at the Pageant was a display of simultaneous aerobatics by five "Genet-Moths" from the Central Flying School. The lower picture shows them taking off while the top picture shows how close each machine was to the other. 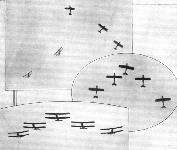 AEROBATICS BY "GENET-MOTHS": Five instructors from the Central Flying School "evoluting" together. In the upper photograph the machines are just commencing a loop. On the right they are seen upside down. Below, in formation. 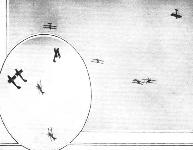 "THE DOUBLE BUNT:" The "Genet-Moths'" turn at the Birmingham Pageant. In the large picture the "Moths" are seen turning upside down after diving - the machine on extreme right is just turning over from the dive. Inset, a simultaneous half-roll.

SOME OF THE MACHINES AT NORWICH: The photograph shows a Vickers "Virginia" coming in to land over a line of "Moths" which are having their tanks filled.

WINNIPEG FLYING CLUB: Left, Mrs. J. Bracken, who christened the first D.H. "Moth" belonging to the Winnipeg Club, landing from the machine after a flight with Mr. Michael de Blicquy, and receiving a bouquet from the Chairman, Mr. Roy S. Parkhill, and right, Mr. C. W. ("Speed") Holman, operating manager of North Western Airways, Inc. St. Pauls, Minn., thrilled the crowd with his flying at the opening of the Winnipeg Club. He is noted for his record loops.
<<   0/0   >>