The finish of the Grosvenor Challenge Cup Race: The Newcastle Club's "Moth" 'PT (G. S. Kemp) comes in first with their other "Moth" 'QV (H. L. B. Dixon) second, and the Lancashire Aero Club "Avian " 'EC (A. Goodfellow) third.

The line-up and winner of one of the three racing events at the Newcastle Pageant. S.B.A.C. Challenge Cup: Dr. H. B. L. Dixon.

The Novelty Race :- Mr. R. G. Murray whose aerobatics gained him much applause.

A well-tried favourite in a new guise - The Westland Widgeon Seaplane.

THE LATEST "HERMIAN": R. G. Cazalet's Westland "Widgeon," in which he has just installed a Cirrus "Hermes" engine.

ROYAL SAFEGUARDS: Prince George getting into the cockpit before leaving. In accordance with the regulations it will be seen that he is wearing a Service parachute. The fairing, windscreen and aluminium side panels of this machine, which was specially built for this type of work, should be noted.

A CHALLENGER FOR THE WORLD'S DISTANCE RECORD: The Fairey Long-Range Monoplane, with Napier, "Lion" engine which, crewed by Sqdn.-Ldr. Jones-Williams and Flight-Lieut. Jenkins, flew from London to Karachi non-stop in 50 hrs. 37 mins., a distance of 3,950 miles. The machine is to be used again on an attempt to beat the record recently established by the French aviator Costes.

Service. B.P. refuelling an Avian from one of their portable pumps.

TEAM WORK'S JUST REWARD: Flight-Lieut, de Le Poer Trench holding the Cup which he won in the Kingston-upon-Hull Light Aeroplane Race. A victory which was largely made possible by the keen interest and hard work put in by the A.D.C. ground staff.

The finish of the Grosvenor Challenge Cup Race: The Newcastle Club's "Moth" 'PT (G. S. Kemp) comes in first with their other "Moth" 'QV (H. L. B. Dixon) second, and the Lancashire Aero Club "Avian " 'EC (A. Goodfellow) third.

An Avro X (3 "Lynx"), of which several are to be put into service in Australia.

Piaggio P.7 представлял собой самолет весьма необычной конструкции. На нем итальянцы намеревались выиграть Кубок Шнайдера, но машина так и не поднялась в воздух.
A SCHNEIDER TROPHY ECHO: The Piaggio P-7, which was designed by Sig. Pegna for the Schneider Trophy Contest, is of very unusual design. Little is known regarding the details, but the fuselage acts as the main float, and means are provided, when taking-off, for lifting the fuselage clear of the water - through, we believe, the agency of a water propeller - so that the airscrew in the nose can be brought into action.

THE GLOSTER AIR SURVEY MACHINE: Two of these machines, fitted with Bristol "Jupiter" engines, have been built, of which the one shown is to be put into service by the Aircraft Operating Co. The other is for sale, and would, as an alternative, be very useful as a commercial aeroplane.

A Supermarine Southampton filling up from the new Bowser pit at Hythe. 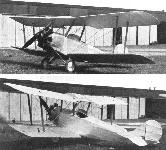 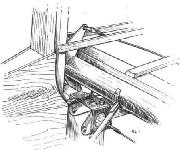 B.I.G. FLYING: Capt.Lamplugh, of the British Insurance Group, has long been a pilot, and is a Flying Officer in the Reserve of Air Force Officers. Colleagues of his, Mr. W.R.Massey (on Capt. Lamplugh's right) and Mr. A.G.Hawood (on Capt. Lamplugh's left) are Flying Officers in No.600 and No.601 A.A.Squadron, respectively. They are seen doing some very good formation flying on three "Gipsy-Moths" of the de Havilland Flying School.

THE PRINCE'S MOTH: As previously reported in "Flight," H.R.H. the Prince of Wales has acquired a D-H. "Gipsy Moth" for his personal use. We show above a photo of this machine - G-AALG.

THE WIRELESS "MOTH": This D.H. "Moth," belonging to Air Work, Ltd., has been equipped with an Amplion Wireless Receiving Installation intended for Private Owners' machines. Air Work, Ltd., it should be mentioned, are shortly broadcasting weather reports from Heston to Private Owners, and it is for such purposes that this receiving set has been designed.

"GIPSY-MOTHS" FOR UNION AIR MAIL: The Union of South Africa Airways are making use of the "Moth," and above is a batch of machines lined up at Cape Town, ready to fly to Port Elizabeth

The Novelty Race :- Smiles of Victory;

The Novelty Race :- Good team work by the winning crew.

AN AVRO V (3 GENET MAJOR ENGINES) FLYING IN THE NEIGHBOURHOOD OF HESTON: Sold to Wilson Airways, Limited, this machine is to be put into service in Kenya.

The Avro V sold to Wilson Airways, Ltd., and to be used in Kenya

THE AVRO V: This machine is not, as its registration letters might lead one to believe, the property of the Kodak Company, but of Wilson Airways, Ltd. It is here seen taking off from Heston Air Park.

THE AVRO V: This illustration shows the placing of the three Genet Major engines. A very wide wheel track and independently-operated wheel brakes are features of this machine, which carried four passengers in addition to the pilot.