The first evaluation Cirrus I Moth, J8030, at Martlesham Heath in April 1926.

The Genet Moth Display Flight of the CFS takes off at the Hendon RAF Display on July 2, 1927, with J8818/G-EDCA leading.

Production D.H.60M J9922 was later released to the manufacturers as G-ABNE.

FOR THE R.A.F. DISPLAY: A batch of "Gipsy-Moths" ready for delivery. They will figure in some of the events at Hendon on June 28.
The specially rigged D.H.60M Moths, K1213-K1217, ready for delivery from Stag Lane to the CFS Display Flight in April 1930.

K1825 saw varied service with the Inland and Fighting Areas, No 3 Squadron and the Armament Training Camp, Sutton Bridge, where it crashed on May 29, 1937.

NOT A NEW TYPE OF "MOTH" SEAPLANE: This photograph shows the force-recording undercarriage used at Felixstowe for taxying tests of large-scale models of flying-boat hulls (in this case that of a Short "Singapore II").
K2235 at MAEE Felixstowe in 1931 with the scale Singapore hull central float for dynamic testing. 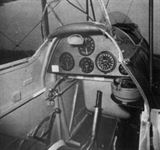 A pupil's-eye view of the D.H.60M's rear cockpit, with the Gosport tube mouthpiece just below the padded rim.