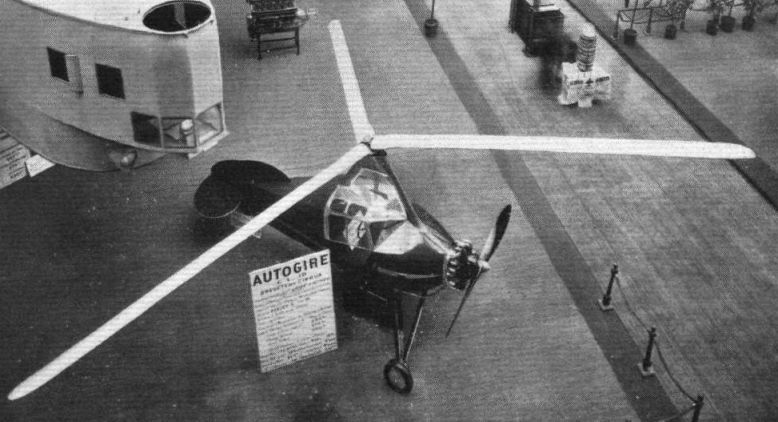 Liore & Olivier. - The centre of attraction on the LeO stand is, however, the Pobjoy-engined Autogiro, a sketch of which was published in FLIGHT some weeks ago. The fuselage looks uncommonly short and "fat," but possibly is long enough. The directly-controlled rotor is of the three-bladed type, and is tilted laterally by a wheel, while a to and fro movement gives it its action as an elevator. The wheel arm runs en a curved rail, and a knurled knob locks it in any position. We gather that the machine has not yet been flown, not having been completed in time, but its future will be watched with interest.

FIRST FATAL AUTOGIRO ACCIDENT
French pilot killed by taking the machine off with the fore-and-aft control locked in the position corresponding to best rotor angle for running-up on the ground.

IT is with the greatest regret that we have to place on record the death as a result of a flying accident last week of M. Pierre Martin, one of the Liore & Olivier firm's test pilots. The accident occurred at Villacoublay aerodrome, while M. Martin was making his first solo flight on an autogiro similar to that exhibited at the Paris Aero Show recently.
Mr. de la Cierva himself carried out all the preliminary test flights on the new LeO "Autogiro," and was thoroughly pleased with the machine, which came fully up to his expectations both on the score of performance and in general handling qualities. Previous to the accident Mr. de la Cierva had taken M. Martin up as passenger, and had given him instructions in handling the machine. Not that Martin was quite a beginner. In fact, he had flown between 30 and 40 hours on "Autogiros" of different types. The actual machine on which the crash occurred had done some six hours of flying in the hands of Mr. de la Cierva. When he handed over the machine to M. Martin, he was quite satisfied not only with the machine, but with Martin's ability to handle it.
The take-off appeared a little unusual, the machine running along and seeming to gain unusually high speed on the ground. Finally it got into the air and reached a height of about 200 ft., apparently with the engine "full out." It then got into a slight dive and descended in that manner until it struck the ground, still with the engine running. M. Martin was thrown out and killed.
The first newspaper reports had it that one of the rotor blades broke while the machine was flying. This is untrue. There was nothing whatever wrong with the rotor, which kept running perfectly until the machine struck the ground.
An examination of the wreckage revealed the fact that the fore-and-aft control was locked, although there were signs that the pilot had wrenched it slightly loose. There seems to be no doubt that the accident was due to the human element. The direct-control "Autogiro" built by Liore & Olivier has the control column running down past the side of a curved rail, and a knurled knob is provided by means of which the control column can be locked in any fore-and-aft position. The arrangement is indicated in the sketch by Jean Gaudefroy, which we reproduce from the special Paris Aero Show number of our very excellent French contemporary l’Aeronautique.
When running up the rotor on the ground, it is customary to lock the fore-and-aft control in a certain position. This was done as usual before the fatal flight, but apparently M. Martin forgot to unlock it when he declutched the starter and began his run to take off. The result was that he took the machine into the air with his fore-and-aft controls locked, and was left with lateral control only (as far as the rotor is concerned) and, of course, rudder control, which is independent of the rotor.
It would seem that when he felt the machine behaving in a strange manner M. Martin lost his head to the extent of forgetting that he had the ready means of unlocking the fore-and-aft control. Instead he appears to have struggled with his wheel, trying by sheer force to pull the control back. The wreckage indicated that the control had been wrenched, and seemed to show that Martin had succeeded in moving the wheel a small distance, but it was not sufficient to flatten out, and the machine went into the ground at a slight diving angle.
Greatly as the death of a pilot of M. Martin's calibre is to be regretted, it is gratifying that nothing went wrong with the machine itself, and that there was no question of the rotor blades breaking in the air. An accident of this nature is probably not very likely to occur again, but it might be worth while to place a reminder in the cockpit of future machines.
In lamenting the death of a popular and skilful pilot, it is worth placing on record that in the whole history of evolution of the "Autogiro" this is the first fatal accident, a fact which speaks well for the general safety of this type of aircraft, and we are certain that when the full facts of the causes of this crash are generally known, the unfortunate occurrence will have no adverse effects on the future development of the type. 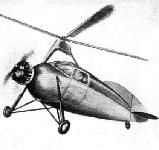 A LeO AUTOGIRO: An artist's impression of the little side-by-side two-seater which is now being built under licence in France by the Liore & Olivier firm. The machine, which is fitted with a Pobjoy engine, will be exhibited at the forthcoming Paris Aero Show.

THE LIORE & OLIVIER AUTOGIRO (POBJOY "R" ENGINE): This sketch by Jean Gaudefroy, reproduced by courtesy of our French contemporary "L'Aeronautique," shows most of the structural details. The fore-and-aft control is guided by the curved rail A, and can be locked in any position by the knurled knob B. It was through taking the machine off with the control locked that the fatal crash occurred.
<<   0/0   >>