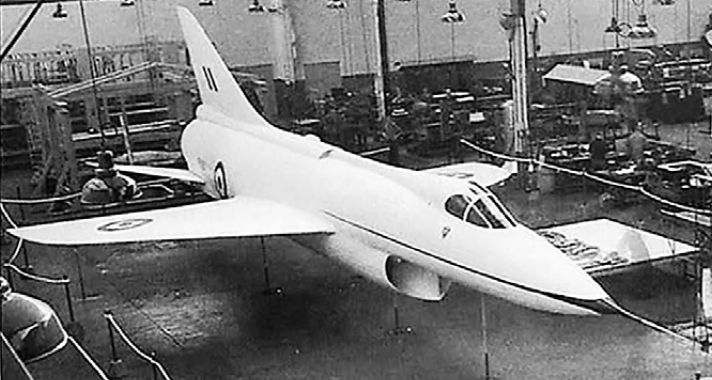 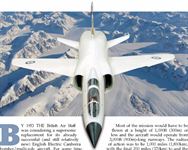 LAST OF THE DEDICATED BOMBER-KILLERS: The OR.329/F.155 contenders
ISSUED BY THE Air Ministry in mid-1954, Operational Requirement 329 outlined what the Air Staff wanted from the next generation of interceptor aircraft, and Specification F.155 detailed how this requirement should be met. The demands of F.155 included the following:
- the ability to intercept an enemy bomber flying at Mach 1+ within 20min of target contact (approx 250 miles - 400km - from the UK);
- a service ceiling of at least 60,000ft (18,000m);
- the ability to carry armament of a mixture of infra-red homing and radar-guided missiles;
- a crew of two; pilot + weapons officer/navigator.
Thus the result would have to be a rapid-climbing Mach 2+ interceptor capable of carrying at least two collision-course missiles, and which would eventually replace the English Electric P.1B Lightning. Engine manufacturers also set about developing new powerplants for this new generation of fighters, including de Havilland (Gyron/Gyron Junior) and Rolls-Royce (RB.106).
Ten designs were put forward for F.155, but none proceeded beyond the design stage, the 1957 Defence White Paper sounding the death knell of the dedicated bomber-killer. The ten were:
Avro Canada CF-105 Arrow Added to F.155 towards the end of the process, the Canadian Arrow was essentially a stopgap to cover probable delays in the Fairey Delta 3 project (see below).
Avro 729 Little appears to be known about the Avro 729; it was described variously as a single-Gyron-powered all-weather fighter and a twin-engined canard design, as seen here.
Vickers-Armstrongs (Supermarine) Type 559 This canard design with a large air intake beneath the cockpit for its twin Gyrons, one atop another, as on the P.1, was to carry a pair of Red Hebe missiles on dorsal pylons. Deemed too radical
de Havilland D.H.117 Powered by a pair of Gyron Juniors and a D.H. Spectre booster rocket in the tail, the straight-winged D.H.117 was deemed not radical enough, and certainly not enough of an advance on the P.1B Lightning.
Fairey Delta 3 Based on research undertaken with the Delta 2 (F.D.2), Fairey submitted two designs to F.155; a large twin-Gyron-engined Red Hebe-carrying version that would meet the full spec, and a smaller, less ambitious single-engined version that would be easier to develop. The large version was selected by the MoS and Air Staff.
Armstrong Whitworth AW.169 With a pair of Gyron Juniors in nacelles fitted to a razor-thin straight trapezoidal wing, the T-tailed AW.169 would carry Blue Vestas on its wingtips.
English Electric P.8A much modified and larger Lightning fitted with Red Tops on its wingtips, this was considered insufficient advance on the P.1B.
Saunders-Roe P.187 A development of the company’s SR.53 and SR.177 mixed-power concepts, the P.187 was too big from the outset.
Hawker P.1103 This was to be powered by a single Gyron, with detachable rocket boosters mounted mid-wing and Red Hebes on its wingtips. 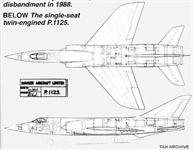 After a great deal of wrangling between the two competing parts of the Hawker Siddeley Group - Avro and Hawker - for GOR.339, a final iteration was drawn up incorporating Ferri intakes (with swept-forward lips, as on the Republic F-105), as seen in this artist’s impression. This final HSG submission was presented in a brochure produced by Avro at the end of 1958 - but it was too little too late.
<<   0/0   >>