A typical Siskin IIIa, J8954 was built under subcontract by Gloster Aircraft Co Ltd and served with No 41 Sqn from February 1928. The engine was a 450 h.p. Armstrong Siddeley Jaguar IV air-cooled radial. Although a rugged and dependable fighter, the Siskin lacked streamlining when compared to the Hornet/Fury, as is obvious here. 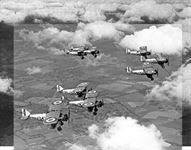 Armstrong Whitworth Siskin IIIa fighters of No 43 Sqn up from RAF Tangmere in August 1930. They would be replaced by Hawker Furies in 1931.

It has been suggested that the Hawker Norn, the prototype for the Nimrod naval single-seat fighter, might have been used as the demonstrator during the 1931 Balkan tour, but this seems unlikely, as it was heavily involved in Fleet Air Arm trials by that time. The Norn is seen here in November 1930 during its A&AEE trials.

A poor-quality but rare snapshot of the Hornet at Tangmere in 1930 during the Service trials and shortly before the aerial collision with a Siskin during a mock combat that put an end to its career. Fortunately its pilot, Fg Off H.S. Brake, was able to bale out, escaping with a cut face and a broken arm, having been struck by parts of the airframe during his descent.

The sole Hawker Hornet at Martlesham Heath during its official trials, bearing its military serial, J9682. The original print bears the date February 10, 1930, on the back.

The Hawker Hornet at Brooklands in 1929, shortly after completion, with RAF insignia but lacking a military identity. Its careful streamlining, greatly helped by the choice of a water-cooled inline engine, made it an exceptionally elegant design for the time, later further enhanced by the addition of wheel fairings, or "spats".
Hornet had similar airframe but with water-cooled Rolls-Royce engine. Used throughout 1930 as Fury prototype with F.XIIS, which in production form became the famed Kestrel. Top speed 214 m.p.h. at 10,000 ft.; loaded weight 3,490 lb.; length increased to 26 ft. 8 1/2 in.

A close-up of the Hornet’s forward fuselage, showing the rear of the Rolls-Royce engine to the right and the bay immediately ahead of the cockpit, with the barrels of the twin Vickers Mk III machine-guns pointing towards the front of the machine. Provision was made for 600 rounds per gun. The production Fury would retain the same armament.

Another view of J9682 on a rainy day during its performance and handling trials at the A&AEE at Martlesham Heath, also dated February 10, 1930. The metal-panelled forward fuselage and fabric-covered rear fuselage are evident, as is the underfuselage radiator housing between the undercarriage legs. 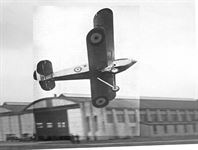 The Hornet makes a low pass while being demonstrated at Brooklands in July 1929, probably with Hawker test pilot P.W.S. “George” Bulman at the controls. Designer Sydney Camm apparently got it right first time with the Hornet, which was built as a private venture, as few alterations were made in the production version, the Fury.

Bulman’s snapshot bears the handwritten inscription “Novi Sad 2 July 1931” on the reverse. The Tomtit is almost certainly G-AASI, and the nose of an inline-engined biplane with roundels is visible behind, on the right. Also on the back are the names of the individuals; from left to right, “Ludvig, Hayward, Osborn, Eales, Ferdo”.