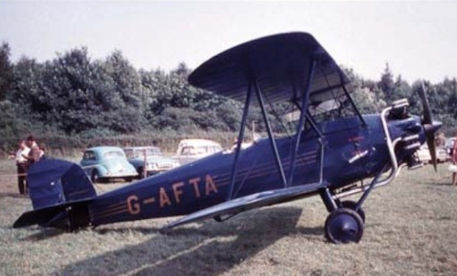 DESIGNED for a competition held by the Air Ministry for a training machine for use in the Royal Air Force, the new Hawker low-power biplane which we illustrate this week is of interest in that it incorporates a number of features and equipment not usually found on such low-powered aircraft. In addition, the machine is of all-metal construction throughout, except for the fabric covering.
A normal biplane in aerodynamic design, the Hawker machine is characterised by a very pronounced stagger, the chief object of which is to provide good view from both cockpits, as well as to make it possible for the occupant of the front seat to make effective use of his parachute. The forward placing of the top plane and the cut-out in its trailing edge leave the space free above the front cockpit. To make up for the heavy stagger, the wings are given a slight sweepback.
A complete set of instruments is fitted in each cockpit, so that both instructor and pupil is well equipped, and include Reid turn indicators of special type so as to make the machine suitable for teaching pupils to fly in darkness or cloud. A special hood is also provided which shuts out all view from the cockpit, the object being to teach a pupil to fly by instruments entirely. Handley Page automatic slots are fitted, and it is reported that the machine cannot be made to spin when these are in operation. (The first test flights were made with the slots locked in the closed position.)
The Hawker training machine has a steel tube fuselage, the longerons being of the typical Hawker type in which flats are formed on the round tubes at the points of the strut attachments in order to allow simple plate fittings to be used.
The wings have steel tube spars of a type evolved by the Hawker company, formed from a large-diameter circular-section tube, the section of which has been changed into one that may be described as resembling a double figure-of-eight.
The engine fitted in the Hawker training machine is an Armstrong-Siddeley "Mongoose" of 120 h.p. This, as our readers will probably know, is a 5-cylinder radial air-cooled engine, with cylinders and pistons similar to those of the "Jaguar" and "Lynx" engines. The petrol feed is by gravity from a tank in the deck fairing ahead of the front cockpit.

OF the three complete aircraft to be exhibited on the Hawker stand one will be the "Tomtit" two-seater training machine, while the other two will be a "Hart" day-bomber and a "Hornet" single-seater interception fighter, respectively. Air Ministry restrictions prevent a very detailed reference to the two military types, particularly the "Hornet."

The Hawker "Tomtit" is a two-seater training machine designed on very advanced lines inasmuch as it not only possesses a high performance for its power, but also includes in its equipment features not hitherto met with in a normal training machine. Chief among the novel features of the "Tomtit" must be classed the special equipment for teaching pupils to fly entirely "by instruments." To allow of this being done without possibility of the pupil "cheating" by glancing over the side, the pupil's cockpit is provided with a special type of hood which the instructor can pull over the cockpit, thereby entirely shutting off the pupil's view. That done, the pupil is compelled, if the instructor hands over the controls to him, to rely entirely on the instruments to guide him.
With the equipment supplied with the normal training machine this would be impossible, but in the "Tomtit" a special Reid patent turn indicator is provided, which shows the pilot whether or not he is maintaining a straight course. The smallest deviation is at once felt by the turn indicator, and the pilot is informed by the instrument not only that he is deviating from his course, but also whether he is turning to right or left. Inclinometers tell the pilot whether or not he is on an even keel, and of course the usual instruments, such as airspeed indicator and engine revolution counter, inform the pilot exactly what his machine and engine are doing.
This form of flying instruction has not previously been given in Great Britain, although in France and elsewhere work along the same lines has been carried out. The introduction of a special type of Reid turn indicator has made "blind flying" instruction possible on relatively small machines. The object of teaching flying entirely by instruments is, of course, to accustom the pilot to fly his machine when visibility is at a minimum, such as at night or in clouds and fog, without a natural horizon to guide him. In the "Tomtit" a special floodlight system of dashboard illumination has been installed for use when the pupil's cockpit is covered by the hood.
General features of the Hawker "Tomtit" are: heavily staggered biplane arrangement to give good view and to afford the occupant of the front seat an opportunity of getting clear by parachute in cases of emergency, all-metal construction, and efficient aerodynamic design resulting in a very good performance. Although designed as a training machine, the "Tomtit" would make a very fine mount for the private owner who wants something a little more "snappy" than the usual lower-powered two-seater. By covering the front cockpit over and generally "cleaning up" the machine, the "Tomtit" would also form a very useful racing mount.
Structurally the Hawker "Tomtit" is of interest in being of all-metal construction, incorporating most of the special constructional features developed by the Hawker company during the last two or three years. The fuselage is, as far as its main structure is concerned, built entirely of steel. The longerons as well as the struts are steel tubes, and the joints between them are extremely simple. The longerons in the "Tomtit" are circular section tubes, on which flats have been pinched on four sides at the points where the junctions with the vertical and horizontal struts are to be made. The flats thus formed provide convenient anchorages for the simple sheet metal fittings, bolts, etc., as shown by one of our sketches. Not only is this form of construction extremely simple and rapid, but it is cheap, not merely because of its simplicity, but also because by standardising a few sizes of fittings a complete range of machines can be covered, from a light plane up to a single-engined bomber. In ones or twos welded steel tube construction might be a little cheaper, but there seems little doubt that with real mass production the Hawker system would be very much quicker than welding, while the work of assembly could be done by unskilled or at most semi-skilled labour.
The wing construction of the "Tomtit" is also steel, the main spars being of the type known as the "double-eight" section, which is formed from a large-diameter steel tube originally of circular section. The wing fittings, such as those joining the inter-plane struts to the spars, are as simple in their way as are those of the fuselage, and it is to be assumed that the very low structure weights achieved in all Hawker machines are due very largely to the painstaking care taken in getting the small items, of which there are such large numbers in an aeroplane, as simple and as light as possible.
The engine fitted in the exhibition "Tomtit" is an Armstrong-Siddeley "Mongoose," but we are informed that if desired the machine can be supplied alternatively with A.D.C. "Hermes" engine. The petrol capacity is 24 gallons, which, with the "Mongoose" engine, gives a cruising range of approximately 350 miles.
The main dimensions and areas of the "Tomtit" are: Length o.a., 23 ft. 5 in.; wing span, 28 ft. 6 in.; height, 8 ft. 8 in.; wing chord, 4 ft. 9 in.; wing area, 238 sq. ft. With a tare weight of 1,100 lbs. and a disposable load of 650 lbs., the gross weight of the "Tomtit" is 1,750 lbs., giving a wing loading of 7-36 lbs./sq. ft.
Performance figures for the "Tomtit" are: Full speed at 1,000 ft., 124 m.p.h.; at 3,000 ft., 122 m.p.h.; at 5,000 ft, 119 m.p.h.; and at 10,000 ft., 102 m.p.h. The climb to 1,000 ft. takes 1 minute; to 3,000 ft., 3 mins. 19 secs.; to 5,000 ft., 6 mins. 7 secs.; to 10,000 ft., 14 mins. 22 secs.
<...>

Hawker Tomtit G-AFTA (the full-size aircraft is seen here at Old Warden in 1960), and finished it in the very same paint used on all the Hawker “heritage" aeroplanes.

A NEW TRAINING MACHINE: Three views of the Hawker "Tomtit" all-metal biplane. Note the pronounced stagger and slightly backswept wings. The engine is an Armstrong-Siddeley "Mongoose" 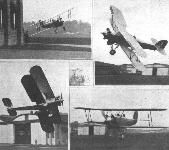 FITTED FOR "BLIND" FLYING: The Hawker "Tomtit" (Armstrong-Siddeley "Mongoose" engine) has a hood over the rear cockpit, used for teaching flying entirely by instruments.

THE HAWKER "TOMTIT": A training machine of recent production, incorporating several unusual features. For instance, it is fitted with a special type of Reid turn indicator, and other instruments which permit the pupil to be trained in flying solely by instruments. For this purpose the hood over the back cockpit is closed, cutting out the view entirely. These two illustrations show the machine with hood closed and with hood open. The engine is a "Mongoose."

AN all-metal training machine (two seater) with Armstrong-Siddeley "Mongoose" engine. In the King's Cup Race, one ol these machines (No. 33) has been entered by the Prince of Wales. 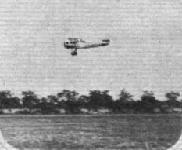 THE TWO "TOMTITS": The Prince of Wales' machine in the lead, closely followed by Captain Guest's entry. 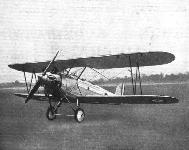 Hawker "Tomtit" (Mongoose). The machine has been adopted as a standard training machine by the Royal Air Force. Like all Hawker machines, the "Tomtit" is doped with CELLON.

The Hawker Stand has the distinction of exhibiting three machines never hitherto seen in public: The "Tomtit" training machine, the "Hart" day bomber recently ordered in quantities for the R.A.F., and the "Hornet," believed to be the world's fastest single-seater fighter.

THE HAWKER-WOLSELEY COMBINATION: The three Hawker "Tomtits" trying out their new Wolseley A.R.9 engines near Brooklands before the race.

A formation flypast by Hawker’s Tomtit, Hart and Hurricane was a regular sight at British displays of the early 1950s, the Hawker test pilots frequently winning best-formation accolades and trophies. The speed ranges of the aircraft were quite different and a generous helping of flap was necessary to keep the Hurricane in tight formation. This flyby was captured at White Waltham on August 31, 1952.

Lowdell low down: Mr. George Lowdell, who put up two masterly aerobatic displays, and his Hawker Tomtit in the act of strafing the clubhouse. 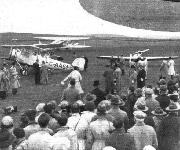 Interest at Ronaldsway after the finish of the London - I.O.M. Race. In the foreground are F/O. Hughesdon's Wolseley-engined Hawker Tomtit (2nd), Mr. Humble's single-seater Gipsy Six Hawk (3rd) and the D.H.86 flown by Mr. Higgins (4th). 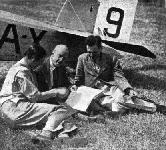 THE NEW WOLSELEY ENGINE: This is the first photograph to be published, and shows the engine in the Hawker "Tomtit," to be flown in the King's Cup Race by Mr. Sayer (No.8).

The folding hood of the Hawker "Tomtit," which is used for training pilots in flying entirely "by instruments." 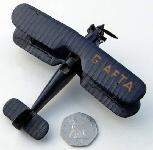 Following publication of our article on Hawker Hurricane PZ865’s post-war racing career in TAH5, Chris Farara and Dick Poole alerted us to the fact that the late David Lockspeiser had built a 1/72nd-scale model of Hawker Tomtit G-AFTA, and finished it in the very same paint used on all the Hawker “heritage" aeroplanes. TAH has borrowed the model from David’s family, to examine the colour - which is close to Methuen 20F8, and just a touch lighter than Humbrol 15 Gloss Midnight Blue.

Typical fuselage details of Hawker "Tomtit" and other machines. Note the use of circular tubes, with flats formed on them.

On the Hawker "Tomtit." The neat sternpost arrangement and, below, a wing spar with strut fitting.