A Sopwith "Camel" carried on a cruiser. It may be recollected that it was a "Camel" from a cruiser which brought down a Zeppelin.

AVANTI SAVOIA!: One of the Savoia S.55 flying-boats which carried out the successful formation flight across the Atlantic from Africa to Brazil. The decorations were not flown during the crossing

The pilot's cabin and dash of the S.55. British instruments, supplied by "Smith's," were used on all the machines.

The wireless cabin of the Savoia S.55 flying-boat. Wireless played an important part throughout the flight.

A Short Seaplane flying off the deck of the "Furious." Note that the wheels are arrested at the end of the deck. 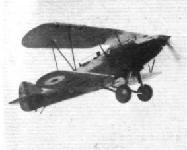 The arrival of the first aeroplane at Semarang aerodrome on the occasion of the opening of the regular K.N.I.L.M. daily Air Service.

An incident of Lt. Koppen's pioneer mail flight in 1927, when his F.VIIb became bogged at Bangkok.

Squadron-Commander Dunning making his first landing (on a Sopwith "Pup") on the flying deck of the "Furious."

One of the Power Plants of the "Ente": These are Siemens Sh-14 type, of 110 h.p. each. The undercarriage consists of a horizontal Vee and a telescopic strut to the engine mounting.

COMING OR GOING?: The "Ente" in flight. Note the plan form of the front plane.

THE FOCKE-WULF "ENTE": Note the pilot's cockpit, the cabin door, and the petrol tanks in the wing. Standing by the machine are Herr Focke and the firm's chief test pilot, Herr Edzard.

THE FOCKE-WULF "ENTE": Two views of the front plane. Note the slot arrangement of the elevator flaps.

TRACK ASSEMBLY OF AIRCRAFT: These two photographs show the main sections of a Blackburn "Ripon." Above the central steel tube fuselage structure with petrol tank in place, and below the wooden rear portion of the fuselage. It is chiefly to the "Ripon" that the system of track assembly has been applied at Brough.

TRACK ASSEMBLY OF AIRCRAFT AT BROUGH: (1) First stage, a "Ripon" fuselage on the track. (2) The next stage, the rear portion of the fuselage added. (3) Beginning of track, and "Ripons" in early stages of assembly. (4) "Ripons" nearing end of track; note overhead derrick. (5) "Ripons" nearing completion on the end of the track. (6) The final stages. In the foreground a "Ripon" ready for test flights.

VERSATILITY: The Avro Advanced Training Aeroplane, Type 626, has now been equipped in six distinct styles, which between them make the machine suitable for specialised instruction in: 1, prone bombing; 2, wireless; 3, Lewis gun (observer's); 4, "blind" flying; 5, photography; 6, Vicker's gun (pilot's). In addition, the machine is, of course, equipped for dual instruction in flying, and instruction in navigation, while by fitting floats the Trainer is suitable for instruction in seaplane flying. 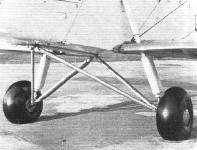 RUNNING ON AIR: A pair of Goodyear 22 x 10-4 Air-Wheels fitted to Avro "Avian" G-AACV owned by Airwork, Ltd., of Heston.

The Cape Town Flying Club's first Avro "Avian," which was presented to them by the "Shell" Co. Our reader writes that this club has had to close down as it was unable to pay its way without a Government subsidy.

DIESEL-ENGINED: A Ford type 4-AT, fitted with three Packard Diesel engines of 225 b.h.p. each. With these engines the machine has a cruising speed of 100 m.p.h. It carries two pilots and 11 passengers. 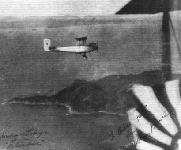 One of types seen at Brooklands - the Vickers "Virginia" Bomber.

The view of the Caproni 90 P.B. shows the general lines of this huge bomber

This view illustrates the actual "giant" proportions of the Caproni 90 P.B., showing the landing wheels.

The arrangement of its six 1,000 h.p. Isotta engines is shown in the picture. Note the gun position on the top plane. 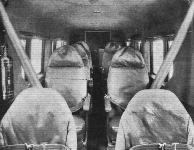 An internal view of the cabin of the Curtiss "Kingbird." There are six comfortably-upholstered chairs, three a side with a gangway in between.

One of the Fairey "IIIF" (Napier "Lion") bombers of the R.A.F. Cairo-Cape flight (1929), at Cape Town. This actual machine crashed on the return flight.

The Farman F.231 Light Plane (95-h.p. Renault) on which the French aviators Lalouette and de Permangle established their record.

The Fokker F.32, a large 4-engined machine (Pratt and Whitney "Hornet") developed in America, will probably be employed on the Amsterdam-Batavia route in the near future. 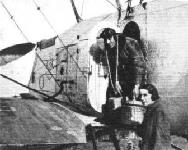 Mr. and Mrs. A. S. Butler deplaning from their Gloster "Survey" machine at Wynbird Aerodrome, Cape Town, on their arrival there last April. The Gloster AS.31 machine, G-AADO, fitted with two Bristol "Jupiter" engines, it will be remembered, was flown out from England by Mr. and Mrs. Butler for the important survey work which the Aircraft Operating Co. had undertaken to carry out in Rhodesia.

The Gloster AS.31 machine, G-AADO, fitted with two Bristol "Jupiter" engines, about to leave Cape Town for the scene of operations.

FLOATS INSTEAD OF HULL: The Short "Valetta" mono-seaplane, Bristol "Jupiter" engines, can also be fitted with land undercarriage.

Mr. Roy Tuckett is on the left, while alongside him is an official of the Port Elizabeth Club where Mr. Tuckett originally learnt to fly. The Goodyear air wheels which originally went out to Africa for Mr. John Carberry's Moth should be noted.

Capt. Latimer-Needham reflecting in solitude and silence over the downs at Totternhoe. 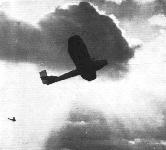 THE "CIRRUS" IN JAPAN: The Ishikawajima training biplane, which, as mentioned in Croydon Notes recently, is now being fitted with "Hermes II" engines

THE BOOTH BABY FLYING BOAT: Henry Booth, a well-known aeronautical designer and engineer of Freeport, L.I., has designed a new two-seater baby flying-boat, which when in production will sel for about 1,500 dols. This boat is powered with a four-cylinder 32 h.p. Johnson Outboard Marine Engine, has a wing spread of 28 feet, a top speed of 75 m.p.h., and a landing speed of 36 rn.p.h. Under test the boat reached an altitude of 8,000 feet and consumed only three gallons of petrol an hour. When fully loaded it weighs 700 pounds.