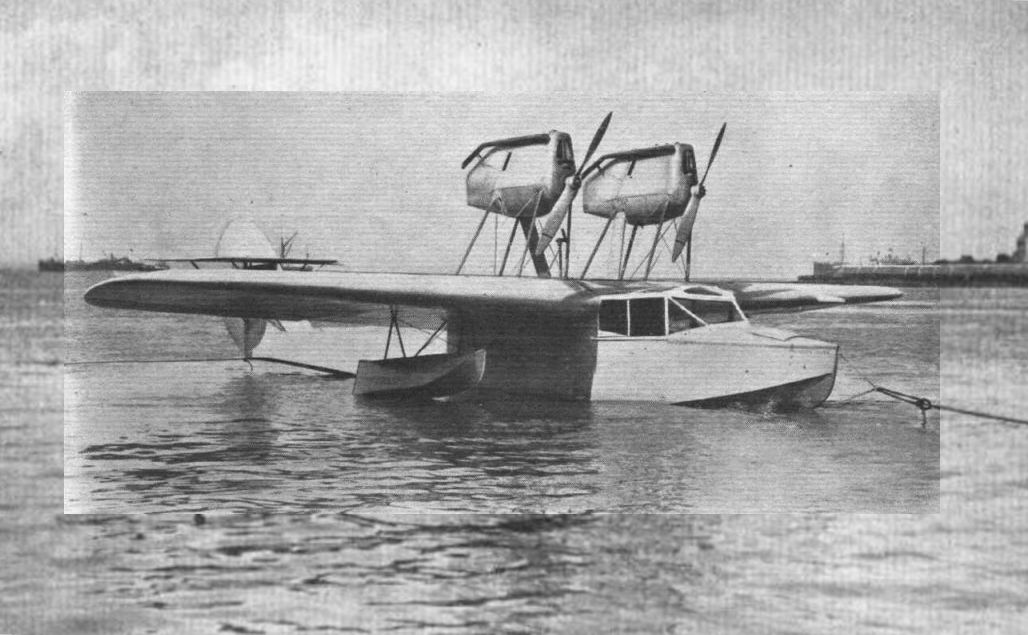 SAROS' Cutty Sark is the only flying machine of its kind at present manufactured in England. As a private owner's machine, it comes into the class which caters for people who want a machine capable, of carrying four people and it is built by Saunders-Roe at Cowes.
As a flying-boat it is unique in its construction, being a combination of metal and wood. The hull is built entirely of "Alclad." This is duralumin protected on the outside with a coating of pure aluminium which acts as a very good protection against corrosion. Fitted with two "Cirrus-Hermes" engines, it has a good performance, and in its latest version it should have a wide appeal to those who wish to travel widely in their machines. The wing structure is plywood, and is divided into many watertight compartments, so that in the case of a crash when the hull becomes waterlogged, the wing tip floats would keep the machine above water, and should they fail, the wing itself would support the whole machine for a very long time.
A further development which should even more widen its appeal is the fitting of an amphibian undercarriage. With this undercarriage, which allows it to land on aerodromes or on the water, the "Cutty Sark" must be considered as the air-yacht par excellence.
The seats are arranged in pairs and dual controls are provided for the front pair, so that the "Cutty Sark" might well be used for instructional work for seaplane pilots, or in any case as a private owner's machine it will have the advantage of a reserve pilot being able to take over the controls for a spell. Further developments of this machine are being planned in the "Windhover" and the "Cloud." Both these are really in the luxury class for private owners, but for the man who can afford them they should be among the best in their class. The former is a three-engined version with a cabin accommodating five persons, while the latter is a 6-8 seater, with two larger engines.
All of these can be fitted with the amphibian undercarriage, and if they follow out the promise offered as developments of the "Cutty Sark," they should prove a type for which we have been waiting for some time.

FROM the time Sir Alliott V. Roe and Mr. John Lord joined forces with Mr. H. E. Saunders, the firm of Saunders-Roe has pursued a vigorous policy of flying-boat development. During a period of a few years no less than four distinct types of flying boat have been produced, of which three are civil types, the fourth a military machine.

The family of civil flying boats includes the above three, the "Cutty Sark" being the smallest and the "Cloud" the largest. In the structural methods adopted the three machines are similar, with "Alclad"-covered metal hull and plywood-covered wooden wing.
The "Cutty Sark" is a small four-seater amphibian flying boat, with two Armstrong-Siddeley Genet Major engines (Gipsy II, Gipsy III and Hermes IV are optional alternatives). The engines are placed on struts above the wing, where they are very accessible, and where the propellers are well clear of water spray.
As a plain flying boat, with the Genet Major engines, the "Cutty Sark" has the following characteristics:
Length o.a 34 ft. 4 in. (10,45 m.)
Wing span 45 ft. (13,7 m.)
Wing area 320 sq. ft. (29,7 m2.)
Tare weight 2,555 lb. (1 160 kg.)
Pay load 850 lb. (386 kg.)
Gross weight 3,997 lb. (1 817 kg.)

IT has often been a source of wonder that more amateur pilots have not interested themselves in the seaplane, and, to particularise, in the small amphibian. The fact that there is only one type of amphibian on the British market is neither here nor there, since the demand would automatically have produced the supply in due course. The performance of the amphibian must naturally be down on the straightforward machine, both in the matter of payload and speed, but one or two recent designs have shown us that the difference need not be so very great.
However, for the present the Saro Cutty Sark - or, perhaps, the larger Cloud - are the only machines of this type available, and each of these has been on the market for a number of years. Naturally, if the demand was present, Saunders-Roe could now improve considerably on these designs. So far as we know, only two Cutty Sarks are in use in this country, though the Cloud has been adopted by the Air Ministry for training purposes. The former, fitted with two Gipsy Major engines, has, however, been adopted by a foreign Government for coastal reconnaissance duties, and in this form the Sark has a very good performance.
The cabin seats four in two pairs, while there is a luggage compartment under the cantilever wing and the locker in the nose for nautical gear. Dual control can be fitted and the two centre panels of the screen hinge back to obtain access to the forward compartment and to enable one of the crew to deal with moorings, and so on.
The specification of the Cutty Sark when fitted with two Gipsy Major engines and when equipped as an amphibian is as follows: Weight empty, 2,670 lb.; disposable load, 1.180 lb.; span, 45ft.; length, 34.3 ft.; maximum speed, 107 m.p.h.; cruising speed, 90 m.p.h.; initial climb, 500 ft./min.; endurance, 3.5 hr. Makers: Saunders-Roe, Ltd., East Cowes, Isle of Wight. 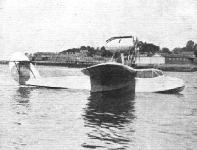 THE FIRST PRIVATELY-OWNED "CUTTY SARK": Mr. Norman Holden has the distinction of being the first private individual to purchase one of the Saunders-Roe "Cutty Sark" Amphibians with "Hermes" engines. Last week he visited Hanworth in his machine, which carries the identification letters G-AAIP.

We show a selection of views of Mr. Norman Holden's "Cutty Sark." The clear view forward from the cabin can be seen, as also the wide track of the undercarriage. On the right is Mr. Holden, Mrs. Holden and Mr. E. Hordern (pilot). 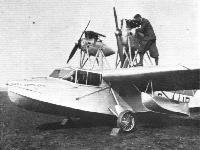 A Saro "Cutty Sark" ready to leave Heston on a tour towards Greece, with Lord Lymington, Capt. Balfour, and Flt.-Lt. Pope.

The Saunders "Cutty Sark" is a small four-seater, twin-engined, flying-boat with metal hull and wooden wing.

A PRIVATE OWNER'S AIR YACHT: The Hon. A. E. Guiness now owns another air yacht, a Saunders-Roe "Cutty Sark," which we show here, about to set out from Cowes on a trial flight.

THE "CUTTY SARK" AT SINGAPORE: The Singapore Flying Club is using a Saro "Cutty Sark" - loaned by the Straits Settlements Government - for advanced training.

THE "CUTTY SARK" IN TASMANIA: The Matthews Aviation Saro "Cutty Sark" amphibian arriving at Hobart after a flight from Australia on December 18 last.

THE MODERN VERSION: The old "Cutty Sark" was one of the most famous of the China Tea Clippers. The Saunders-Roe "Cutty Sark" is just as much of a thoroughbred. A four-seater, with "Cirrus-Hermes" engines, she should be almost the ideal "Air Yacht." 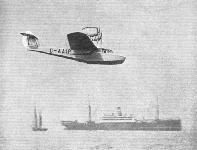 In the Saro "Cutty Sark" Messrs. Saunders-Roe Ltd. have produced an ideal 4-seater cabin flying boat for the private owner. The rudder and elevators are the only portions of the machine which are fabric covered - they are, of course, doped with Cellon. The wings are of plywood and the hull of aluminium alloy - both are finished with Cerric Cellulose Lacquer, which is specially designed to give complete protection against sea-water corrosion, etc.

LOCAL INTEREST: The "Cutty Sark," with a few admirers, at Sarajevo.

A SERVICE AMPHIBIAN: Four views of the Saro "Cutty Sark" amphibian flying boat (two D.H. "Gipsy II" engines), which has been supplied to the Royal Air Force for specialised training in navigational instruction, as well as permitting additional experience of the amphibian flying boat. It is a standard "Cutty Sark," very fully equipped with instruments and electrical gear, and is arranged as a three-seater machine with full dual control.

AST grouping within the huge Avro/AW works building on the southern airfield. Foreground, left to right: Avro 616 Avian IVM floatplane G-ABKB, entered service in March 1931 and served on until being impressed, as instructional airframe 2073M, in February 1940. Saro A.17 Cutty Sark G-ACDP served AST from April 1933 until April 1939 when it was scrapped. Avro 504N G-EBKQ was converted by Avro at Hamble and flew for them in several capacities, the most famous of which was as Bert Hinkler’s mount in the gruelling 1925 King’s Cup which was staged out of Croydon over 1,608 miles and two days in July. In 1930 it was converted to 5040 seaplane status and joined AST, retiring in June 1931 to act as an instructional airframe.

SARO "CUTTY SARKS" FOR CHINA: Two of these machines were shipped recently. They are fitted with two Armstrong-Siddeley "Genet Major" 7-cylinder engines, which give a materially improved performance; extra fuel tanks have been fitted, giving a maximum duration of 7 hours.

An amphibian has its advantages. The Cutty Sark descends the new slipway at Hamble while Flt. Lt. Middleton gives instructions from the control cabin. When the tide is out the "Cutty" can be landed on the aerodrome and taxied to its hangar. 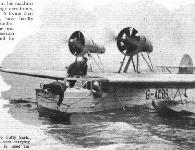 Picking up moorings: The Saro Cutty Sark is used for preliminary training

A NEW SARO "CUTTY SARK": Fitted with a direct-drive Armstrong-Siddeley "Lynx" engine, this machine has been equipped with extra tanks and special instruments, and is being flown by the Japanese pilot Yoshihara from San Francisco to Japan - as previously reported in "Flight." 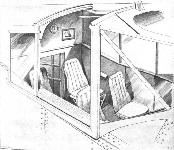 A REAL "AIR YACHT": The Saunders "Cutty Sark," a flying-boat with two "Hermes" engines, has a four-seater cabin of quite exceptional comfort. Situated ahead of the engines, the noise which reaches the occupants is not offensive, and the transparent covering all round results in a very light and airy cabin. 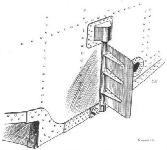 The water rudders on the "Cutty Sark" are mounted on the sides of the hull, and when operated together, form useful brakes.

Details of the hull construction of the Saunders' "Cutty Sark." On the left a wing float, and on the right is Shown the bows, with fore hatch open. 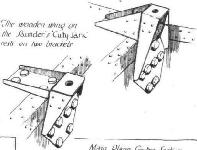 One of the seats, with hinged back framework, of the Saunders "Cutty Sark."