SOME time ago we announced that West Australian Airways, Ltd., has on order from Vickers (Aviation), Ltd., some machines of a new type, to be known as the "Viastra." These machines are to have an unusually high performance (cruising speed in the neighbourhood of 140 m.p.h.), and a power reserve sufficient to reduce to vanishing point the likelihood of forced landings. It has now become permissible to publish a brief outline of the general design of the new machine, the fuselage of which is illustrated in the accompanying sketches.
The "Viastra," designed by the Vickers Weybridge staff, is being built at the Supermarine works at Woolston, and will be an all-metal machine, even to the covering of wings and fuselage, in which Duralumin plate is used. The machine is, as the small front elevation shows, a high-wing cabin monoplane. The design has been so planned that the machine can be supplied and used either as a single-engined machine, as a twin-engined or as a three-engined. Furthermore, two distinct types of undercarriage can be provided, a land undercarriage and a twin-float undercarriage. The "Viastra" should thus be extremely adaptable, and in one of its various forms should conform to the particular requirements of almost any operating company. At first sight it may appear somewhat surprising that one and the same machine should be capable of being fitted up for either one, two or three engines, but it should be recollected that with the three-engined arrangement, for instance, the wing loading will be largely increased, but the power loading will be decreased, and the number of engines will reduce the chances of a forced landing, so that the higher wing loading, and resulting higher landing speed, can be tolerated because one is justified in assuming that the machine will only have to alight on a prepared aerodrome. With one engine, on the other hand, the wing loading will be smaller, and the machine should be easier to land in an emergency.
The "Viastra" is being constructed very largely of Duralumin, in the form of sections of various shapes for the framework, and in sheet form for the covering.
The forward portion of the fuselage has a frame of Duralumin sections, and is covered with Duralumin plate, a sound-deadening stuffing being used to reduce noise in the cabin. The rear portion of the fuselage also has a Duralumin structure and covering, but not, of course, the stuffing.
The monoplane wing has Duralumin spars and ribs and Duralumin plate covering. The wing bracing struts are, however, of steel, and are faired to a streamline section.
The land undercarriage incorporates Vickers' oleo-pneumatic telescopic legs and Dunlop wheels, and Vickers' hydraulic brakes are fitted. These can be operated independently to facilitate manoeuvring on the ground.
The lay-out of the passenger accommodation may be seen in the sketches. There are two rows of seats, one along each side, of six each side, giving a total passenger capacity of 12. The pilots' cockpit is in front of the cabin and wing, and should give a very good view in the essential directions. Dual controls are provided, and the two seats are placed side by side in the cockpit. Heating of the cabin can be either by electricity or from the exhaust. A novel system of ventilation will be employed, by which the windows in the sides of the cabin remain closed, thereby helping to keep out the noise of the engines. The cabin volume is no less than 640 cu. ft., while the lavatory, aft of the cabin, has a volume of 84 cu. ft. There are two luggage holds, each of 100 cu. ft. capacity.
Should the machine be required as a fast freight carrier, the chairs can easily be removed and the large hold used for freight and goods.
The petrol system is of the simple gravity-feed type, with two aluminium tanks placed in the outer wings. All pipe couplings will be of the screwed metal-to-metal type.
The seaplane chassis will consist of two Duralumin floats supported on a framework of steel tubes. Owing to the wide track the machine should have excellent lateral stability both on the ground and on the water.
Details of the power plant are not yet available, but the machine may obviously be fitted with almost any type of engines of suitable power. The drawings show radial air-cooled engines, of which several makes and ranges are now available. West Australian Airways use "Jupiters," and it may be assumed that the machines to be sent out to Australia will be fitted with engines of this type.

THE VICKERS LYNX "VIASTRA I": In the three-quarter front view, the Townend rings around the engines may be clearly seen.

Viastra I G-AAUB seen after conversion to Type 220, with three Jupiter VIFMs, the outer ones fitted with Townend rings. Note the long exhaust pipes to the nose engine, and the triangular fin.

THE VICKERS LYNX " VIASTRA I": Side view.

The Mk.I, now as a Type 220 Mk.VIII, fitted with three Bristol Jupiter VIFMs. The wing-mounted engines are slung lower than in earlier versions.

The Mk.l with three Jupiters but without Townend rings. 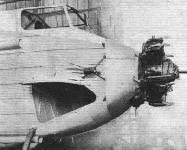 NEARING COMPLETION: In this photograph, taken before the machine was finished, may be seen the central engine (Lynx), forward luggage compartment, and windscreening of cockpit.
1 engine

The Jupiter-powered Mk.VI with one Bristol IXF, with Supermarine's 'trade-plate' markings N-I. The two push-rods which operate the one-piece upper elevator are clearly shown either side of the triangular fin.

The single-engined Mk.VI wearing the Vickers’ 'B Condition’ markings O-6.

THE VICKERS SINGLE-ENGINED "VIASTRA": This machine has now been produced, according to the original plan, as a three-engined, twin-engined, and single-engined monoplane. West Australian Airways are using the twin-engined version on the Perth-Adelaide route. The single-engined type here shown landing at Brooklands is fitted with a Bristol "Jupiter" Series XI F.
2 engines

SUBSIDISED: One of the Vickers "Viastras" (two "Jupiters") used by West Australian Airways on the Perth - Adelaide service.

The first Type 198 Viastra Mk.II in Australian markings as VH-VOO at Brooklands in 1930 before shipment to Fremantle.

First flight of Viastra II VH-UOO at Brooklands. Note the triangular fin is uncovered and is merely a pylon to support the elevators.

Passengers at Ceduna ready to board. Note that the engine covers are still on, as is the all important propeller cover.

The Pegasus-powered G-ACCC at Tilton. A Bristol security officer standing next to it shows its scale.

ICH DIEN": H.R.H. the Prince of Wales arriving at the R.A.F. Display in his Vickers "Viastra" (two Bristol "Pegasus" engines). It is to be hoped that the practical example set by the Prince will encourage considerable numbers of the 100,000 or so who saw his arrival at Hendon to make more extensive use of air travel.

Before painting, G-ACCC reveals its somewhat snub nose, as well as the triangular fin.

Prototype Viastra G-AAUB re­engined as a twin to form the Type III, with low-mounted Jaguar VICs. Note the long drag strut to the rear lift strut. 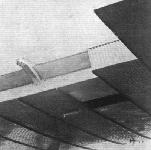 FOR THE FRISE AILERONS: Photograph showing brackets on which the ailerons are supported. 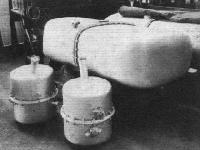 A NEW STYLE IN PETROL TANKS: In the "Viastra" Vickers use fuel tanks built up in two identical halves, joined in the centre by a flange coupling of novel design.

FUSELAGE DETAILS: This photograph shows the construction and placing of the formers which carry the cabin flooring. The fitting on the side is the anchorage for the radius rod of the undercarriage.

FUSELAGE DETAILS OF THE "VIASTRA I": On the left, the junction of rear to cabin portion before completely covered. In the centre view the false floor of the goods compartment is shown raised up, while on the right it is shown in place. This floor enables very heavy concentrated loads to be supported. 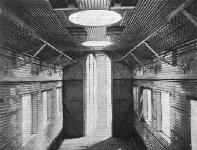 THE "VIASTRA" CABIN, LOOKING AFT: Note the roof lights. The door leads to the lavatory and exit 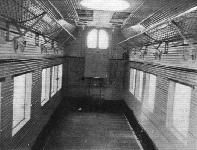 THE CABIN: The photograph shows the finished cabin, before the seats are installed 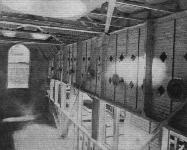 THE CABIN: The photograph shows the cabin during construction.

The crash of VH-UOM pictured the following day, by which time two 50-gallon oil drums have appeared to drain off fuel.

THE VICKERS "VIASTRA": These sketches give some idea of the passenger accommodation, &c. The machine will be of all-metal construction, including the covering of wing and fuselage.

THE CABIN: The sketches show details such as ventilators, etc. Small sand bags riveted to the metal covering are intended to prevent "drumming."

ON THE "VIASTRA": On the left the fitting to which the bent axle and main wing bracing strut are attached. On the right the fitting on the upper longeron to which is attached the diagonal strut of the wing bracing.

SOME "VIASTRA" DETAILS: On the left is shown the construction of wing spars and ribs, while on the right is a sketch of the unusual arrangement of the rudders.