Prince Albert received flying tuition in this Avro 504J, C4451. It is seen at Waddon, later Croydon, with the Prince of Wales at the controls.

The Westland Wessex G-ABEG was used by the Prince of Wales for a trip to the French Riviera in 1931. The aircraft was powered by three seven-cylinder 140 h.p. Genet Major IA engines.

The second Prince of Wales' Rapide was G-ADDD, acquired in June 1935 and sold to Western Airways Ltd in November 1938.

The Prince of Wales' immaculate D.H. 84 Dragon, G-ACGG. It was later sold to Richard Shuttleworth before being sold in Australia as VH-AAC in December 1937.

G-ABFV was one of several Puss Moths owned by the Prince of Wales.

View of the King’s Flight Airspeed Envoy G-AEXX, operated by the flight from May 1937 until October 1939.

Brian Woodford's immaculate D.H.83 Fox Moth G-ADHA being flown by Ron Souch over the Solent this summer. Restored by The Antique Aeroplane Company at Hamble, the Fox is painted in Guards colours to represent Fox Moth G-ACDD, acquired by the Prince of Wales in 1932. 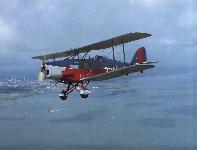 THE PRINCE'S NEW MACHINE: As announced last week, His Royal Highness the Prince of Wales has recently ordered a "Fox Moth" ("Gipsy Major") from the De Havilland Co. The machine is of the King's Cup type, and is finished in the Royal blue and dark red colours of the Household Brigade. Navigation lights are fitted on top of the wing and under the fuselage, and a small wireless set (Marconi) is fitted so that the pilot can communicate with ground stations.
During 1933 the Prince of Wales added Fox Moth G-ACDD to his fleet, in July 1935 the aircraft was sold in Belgium as OO-ENC and in January 1937 it was sold in New Zealand to become ZK-AEK. It ended its days in Fiji as VQ-FAT in the Fifties.