A Walrus overflies Flight’s photographer at Southampton on April 14, 1937. Note the uncovered wheel housings in the lower wing.

A "towed net" recovery, in which the Walrus taxied on to a towed net, was hooked on and hoisted aboard its parent ship. A picture taken during FAA pilot training in 1945.

K8544 mounted on its shipborne catapult in New York City. This aircraft originally served with the School of Naval Cooperation and then went to 718 Flight. It crashed on September 27, 1938.

An ASR Walrus taxies up to rescue a pilot from a dinghy dropped to him by a Spitfire. 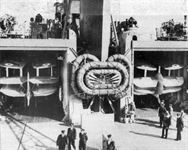 LOCK-UP ACCOMMODATION: H.M.S. Sheffield, a cruiser of the new City class, carries two Supermarine Walrus amphibian flying boats, which are housed as shown above. Of 9,000 tons displacement, the Sheffield has twelve 6in. guns and eight 4m. on twin high-angle mountings. Provision is made for a third aircraft. A multiple pom-pom, bug-bear of dive bombers, will be observed above the starboard hangar.
A pair of Walruses, L2180 on the right, in their hangars aboard the New City Class Cruiser HMS Sheffield in 1938. There was also provision for a third aircraft. Note the multiple pom pom above the starboard hangar.

A Walrus in wartime camouflage with a couple of bombs on its underwing racks.

WING COMMANDER: This Fleet Air Arm officer is not, as appears to be the case, trying to emulate Mercury of the Short-Mayo combination; he is merely ready to hook the Supermarine Walrus on to the derrick tackle of H.M.S. Shropshire. Somebody seems due for a wallow in a minute!
A Fleet Air Arm officer, perched on the centre section of L2194, prepares to hook his Walrus on to HMS Shropshire’s derrick tackle, 1938. 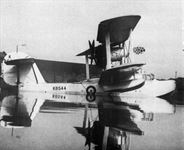 A Walrus of 276 Squadron, RAF, effects a rescue, its mainwheels lowered into the water to improve handling.