Supplies - apparently including boxes of photographic glass plates - being unloaded from a USAAF Douglas C-47 on Vis. 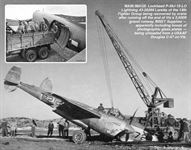 B-24 V Grand, the 5,000th Consolidated-built example, runs-up after an engine change by the USAAF’s 81st Air Service Sqn in November 1944.

An unidentified B-24 undergoes engine work on Vis.

What seems to be a group of military officers and a pair of civilians pose beside de Havilland Puss Moth G-AAZX at Novi Sad Airport in northern Serbia some time during the mid-1930s. If you have more information, contact the Editor!
Stuart McKay from the de Havilland Moth Club has provided some background about why D.H.80A Puss Moth G-AAZX was in Serbia in the mid-1930s.

While I can't answer Philip Jarrett's question regarding which of the two pilots had flown the "Gramatescue" (Lost & Found, TAH29), I can provide a little more detail regarding the aircraft and designer.
The designer was named George Gramaticesco, with a final "o" and not "u", as shown on the postcard image of the monoplane and in patents.
Gramaticesco patented his aerofoil design in Britain, France, Switzerland and Germany between 1912 and 1914 based on the theory that the separation of the airflow at the discontinuity would cause it to impact on the following section, or secondary wing behind (see cleaned-up patent illustration here - Ed.], thus enhancing lift. He may have been mistaken!
Ralph Pegram Fleet, Hampshire