LI Bob Eldridge, pilot of the P-51D modified for carrier trials aboard the USS 'Shangri La’. 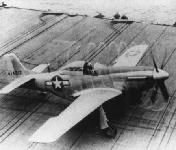 Overhead view of Lt Eldridge's P-51D on the carrier deck. Note the interesting visual effect produced by the propeller. 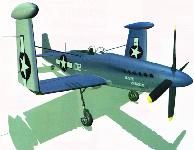 Frontal perspective of the NA-133 all folded up, emphasising its shark-like nose. Based on North American artwork, the engine is believed to be the standard Packard Merlin V-1650-9 used in the Air Force 's P-51H, which gave the type excellent performance. 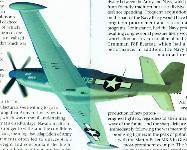 P-51H in flight, showing details of its under surfaces. Notable is the tailhook installation, which resulted in longer tailwheel doors and a slight reduction in the lower part of the rudder.

Contemporary artwork of the NA-133 in a standard three-tone blue scheme on a carrier deck. Inset: A poor quality but revealing cutaway perspective drawing of the NA-133 showing major internal structure and equipment. 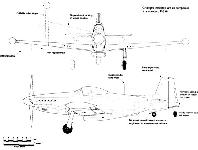 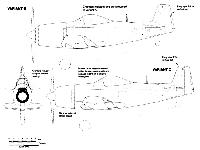 North American Trainer with radial engine. (Variants B and C).

An artist's sketch of one version of North American's Mustang-inspired raidial-engined trainer study, in this case Variant B, which appears to have a stock P-51H fin and rudder. 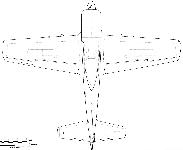 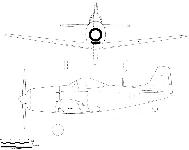 A simple general arrangement drawing of the Mustang trainer from North American, labelled Variant A for sake of convenience.