One of the Armstrong Siddley Puma-powered Airco D.H.9s, either G-IAAQ or G-IAAS, used to map the Irrawaddy River by Kemp during 1923-24, and subsequently used by the Air Survey Co Ltd. 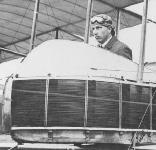 Frederick Raynham was born in Suffolk on July 15, 1893, and after working with J.V. Neale at Brooklands from late 1909, joined A.V. Roe, also at Brooklands, in 1911. Raynham’s Royal Aero Club Certificate, No 85, carries the same date, May 9, 1911, as that of Ronald Kemp, with whom Raynham later established the Air Survey Co Ltd. 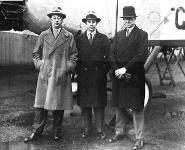 A 1930 photograph of Ronald Kemp (furthest right) beside a Fairey IIIF of the Air Survey Company he established with Frederick Raynham in 1924. Alongside Kemp are two directors of the company: Sqn Ldr Maurice Wright (centre) and Mr A.G. HazelI.
ON this page we show how the Eagle Camera has been arranged in the III F.'s supplied by the Fairey Aviation Co. to the Air Survey Co. for their work in the Sudan. G-AATT, the second of these machines to be taken over, is being flown out to the Sudan by Mr. R. C. Kemp with a mechanic, Mr. A. Calder, as his passenger. Mr. Kemp is, of course, the man to whom the Air Survey Co. owes its being, and he is seen here on the right, with Sqdn.-Ldr. Maurice Wright and Mr. A. G. Hazell, who are now also directors of the company. Mr. Kemp left Croydon at 8-30 a.m. on Sunday, February 9, and arrived at Lyon at 2.30 P.m. the same day.

The unorthodox Royal Aircraft Factory F.E.3 (also known as the A.E.1) of 1913 was developed to accommodate a single Coventry Ordnance Works (C.O.W.) one-pounder gun. Powered by a 100 h.p. ENV water-cooled inline engine in pusher configuration, the F.E.3 was fitted with a single tailboom supported on bearings at the end of the propshaft and attached by wires to the upper wing and undercarriage.

Harry Ferguson sits in the cockpit of the first version of his monoplane at Hillsborough, near Belfast, in 1909, while Leslie Wilkinson primes the eight-cylinder air-cooled JAP engine. On December 31 that year Ferguson made a 130yd flight in a much-modified monoplane to become the first Irishman to fly.

The first non-airship aircraft built by Vickers was a series of seven monoplanes based on designs by Robert Esnault-Pelterie, with fuselages made of steel tubing braced with piano wire and covered with fabric. Seen here is Monoplane No 2, later acquired for use on the 1912 Australian Antarctic expedition.