ON Thursday of last week, June 19, Air Vice-Marshal Sir Sefton Brancker, Director of Civil Aviation, christened the first machine to be designed and built by the Robinson Aircraft Co., Ltd., of Stafford Road, Wallington, Surrey. A number of invited guests were present at the little ceremony, which took place at the London Terminal Aerodrome, Croydon.
Sir Sefton said he always welcomed competition because keen competition meant progress and progress was needed in order to hold our own against the aircraft constructors of other countries. He was, therefore, very glad to see the enterprise shown by Mr. Robinson and those associated with him in coming into the British light 'plane market, and if appearances were any criterion the new machine should do well, as the lines were, he thought they would agree, very beautiful indeed. He wished the new firm success, and christened the machine by stripping off a square of fabric disclosing the name "Redwing."
The machine was then demonstrated by Ft.-Lt. S. F. Woods, who did several loops and other evolutions. The takeoff was extraordinarily good, the "Redwing" leaping off the ground after a very short run and maintaining an excellent angle of climb after once leaving the ground.
The Robinson "Redwing," the first photographs of which were published in our issue of June 13, is a side-by-side two-seater fitted with an A.B.C. " Hornet " engine of 80 h.p. This engine, it will be recollected, is a four-cylinder air-cooled, double flat-twin, and in the Robinson "Redwing" a very neat cowling has been designed for it, which encloses and fairs the engine very cleverly, yet leaves the cylinder heads exposed not only for cooling but for any attention that may be required by valves, plugs, etc., without disturbing the cowling.
The machine was designed by Mr. John Kenworthy who, it may be recollected, was responsible for the first post-war British light 'plane, the Austin "Whippet." That Mr. Kenworthy should now return to the fray as the designer of a modern light 'plane is a fact to be welcomed. His “Whippet'' was a good little machine, but it suffered from two drawbacks: No engine of the quality of modern light 'plane engines was available at that time, and the "Whippet" was before its time.
The "Redwing" has been designed not with a very high top speed in view but rather has the designer aimed at a machine with a very low landing speed, to be controllable at and near the stall, and to be very easy to fly. How far he has succeeded cannot be definitely known until the machine has passed its type tests at Martlesham and has seen a deal of service in the hands of the average owner-pilot. The three pilots who have flown the machine hitherto report that it handles very nicely and has no pronounced vices of any sort, so that it would seem that the "Redwing" starts its career very well.
The first machine is of simple wood construction, and the first production batch, work on which has now begun, will be of similar construction. But the design has been so planned that, should it later be thought advisable to turn over to all-metal construction, the change can be made without affecting the design to any appreciable extent.
The side-by-side seating arrangement, although the fuselage is by no means a very wide one, is quite comfortable, and if the machine is to be used for instructional work a duplicate set of controls can be fitted. For ordinary touring the side-by-side arrangement should enable the occupants to talk in reasonable comfort without the use of telephones, at any rate when the engine is throttled to cruising speed. A result of the side-by-side placing of the seats has been that but a single instrument board (Smith's) serves both occupants equally well.
The luggage locker behind the cockpit is of large dimensions, and is provided with a rearward extension for the purpose of accommodating long articles such as golf clubs, etc. This feature is shown in one of our photographs.
An undercarriage of wide track is fitted, and the compression struts incorporate "double-acting" oleo legs, designed to give ample shock-absorbing qualities without bouncing.
The wings are designed to fold, and the machine then takes up a space of but 10 ft. in width and 23 ft. in length.
The standard equipment includes the following items: Two safety belts, pneumatic cushions for the seats, two suitcases fitted in locker, ladies' companion, large map locker, and two small lockers in dashboard, Tecalemit grease gun for control system, floor mat, engine tool kit, aircraft and engine log books, picketing rings, "Ki-gass" primer, long exhaust pipes, Splintex safety glass, red and cream colour scheme. With this equipment the price has been provisionally fixed at ?575.
The tare weight of the "Redwing" is 800 lb., and gross weight for normal C. of A. is 1,325 lb., and for the aerobatic CofA. it is 1,150 lb.
The main dimensions of the "Redwing" are as follows: Length, 22 ft. 3 in.; span, 30 ft. 6 in; width, folded, 9 ft. 8 in.
Official performance figures are not available until the machine has been through the Martlesham tests, but it is estimated that the top speed will be 92 m.p.h., the cruising speed 84 m.p.h., and the landing speed 30 m.p.h., while the climb to 1000 ft. should be accomplished in about 1 1/2 mins.

DESIGNED to be really easy to fly, the "Redwing" side-by-side two-seater was designed by Mr. John Kenworthy to incorporate such features as low landing speed, good controllability to enable the slow landing to be made in safety, good stability at all speeds so that the machine should not be fatiguing to fly, and with a wide undercarriage track to ensure stability on the ground and to avoid risk of blowing over in a strong wind.
The "Redwing" has been in use by various schools and clubs for a considerable period, and the aims of its designer appear to have been fulfilled. Mr. Kenworthy believes that the side-by-side seating arrangement is the logical one, not only for school work, where the pilot and instructor can converse without the use of telephones, but also for private use, as the side-by-side seating is more sociable.
The engine fitted as standard in the "Redwing" is the Armstrong-Siddeley Genet, of 80/88 b.h.p. With this engine the petrol consumption is approximately 5 gall. (22.7 litres) per hr., so that at cruising speed the "Redwing" does approximately 20 miles per gall. (56.5 km./litre) of petrol. The petrol tank has a capacity sufficient for 3 1/4 hr. at a cruising speed of 85 m.p.h. (137 km./h.), giving a range of about 275 miles (440 km.). The maximum speed of the "Redwing" is 96 m.p.h. (155 km./h.), and the landing speed reaches the very low figure of 30 m.p.h. (48 km./h.).
The "Redwing" has a length of 22 ft. 3 in. (6,8 m.) and a wing span of 30 ft. 6 in. (9,3 m.). The wing area is 250 sq. ft. (23,2 m.2).
For a tare weight of 870 lb. (395 kg.) the "Redwing" has a disposable load of 580 lb. (263 kg.), giving a gross weight of 1,450 lb. (660 kg.).

G-ABNX taxies out at Redhill. In the right seat is John Pothecary who rebuilt the aircraft.

Pilot Nocholas Parkhouse in G-ABNX following a flight at Redhill.

G-ABNX is ideally situated at Redhill, the aircraft being very much a part of Surrey's aviation heritage.

John Pothecary turns the propeller prior to start-up.

Redwing II G-ABNX, the sole survivor of its type, sits out on the grass at Redhill on August 16, 2002, the day the Redwing Preservation Trust was launched.

Pippa Martin, daughter of John Lane, is a keen supporter of the Redwing.

Members of the Redwing Preservation Trust assembled by G-ABNX at Redhill in August 2002.

Redwing I G-AAUO fitted with the ABC Hornet engine, which was later replaced with the Genet.

THE ROBINSON "REDWING": Designed by Mr. John Kenworthy and built by the Robinson Aircraft Co., Ltd., this machine is a side-by-side two-seater of wood construction. The engine is an A.B.C "Hornet" of 75 h.p.

A TWO-SEATER, side-by-side biplane of recent production and of wood construction. Designed for very low landing speed and ease of handling by pilots of only medium skill. The engine is an A.B.C. "Hornet."

The "Redwing": This view of the nose gives a good idea of the neat engine cowling, the undercarriage, &c.

GETTING AWAY: With its light wing loading the "Redwing" has a very good take-off and climb.

SIDE BY SIDE SEATING: The latest "Redwing" produced by the Robinson Aircraft Co. is similar in general construction to the first machine, but the engine is an Armstrong-Siddeley "Genet" for which a very neat cowling has been designed. An undercarriage of long stroke is provided so that landings are particularly smooth.

THE ROBINSON "REDWING MARK II": This side view shows that the lines of the fuselage are good, in spite of the side-by-side seating. Note the unusual shape of the rudder, which gives the machine a distinctive appearance.

THE ROBINSON "REDWING MARK II": The telescopic legs of the undercarriage run to the top longerons.

COLCHESTER: The Blue Barns Aerodrome at Colchester is now the sales depot of the Redwing Aircraft Co., Ltd., for all territory north of London. Here is shown a group of Redwings when the depot was opened by Flt.-Lt. Russell. 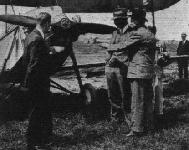 The Power Plant: Mr. Dennis (right) pointing out to Lord Ridley (Chairman of A.B.C. Motors) the neat cowling of the A.B.G. "Hornet" on the "Redwing". On the left is Mr. Elliott, who designed the "Hornet."

THE ROBINSON "REDWING MARK II": On the left a view of the undercarriage and the neat cowling of the "Genet" engine. On the right a photograph, taken while the machine was in course of construction, showing the undercarriage, with compression rubbers. Portion of the engine mounting is also visible.

A large luggage locker, with rearward extens on for golf clubs, is a feature of the "Redwing." 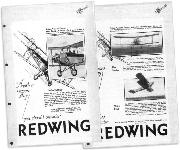 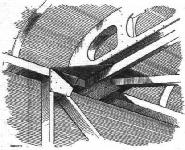 Details of the fuselage construction. The covering is plywood, except the bottom, which is fabric.

The bent axles of the undercarriage are hinged to the cross-tubes in the bottom of the fuselage. The brackets on each side of the hinge carry the engine control rods.

The wing-folding device. T-cranks are mounted on the roots of the lower planes, with cables to the ailerons and links to the pilot's controls.

Pedals are used instead of foot bars for the rudder control. The pedals can be adjusted for length.

On the left a sketch showing rib construction, and on the right the neat end of an interplane strut.
<<   0/0   >>