AIRCRAFT TYPES TO BE SEEN IN THE "EAGLE": 1, The Blackburn "Ripon" with Napier "Lion" engine.

ON TEST AT FELIXSTOWE: The Avro Trainer, type 621 S, has now been fitted with floats, and has just passed very successfully its preliminary tests at Hamble. The machine has now gone to Felixstowe for official tests. The engine is an Armstrong Siddeley "Lynx IV C."

THE ROYAL "PUSS MOTH": The Prince of Wales' aeroplane crated for transport to South America in H.M.S. "Eagle."

CANADIAN PUSS-MOTHS: Some of the first Puss Moths (Gipsy III) out of a large number to be delivered to the Canadian Government. The three different landing gears, comprising large air wheels, standard wheels and skis should be noted. 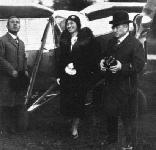 AIRCRAFT TYPES TO BE SEEN IN THE "EAGLE": 3, The Hawker "Osprey," with Rolls-Royce "Kestrel" engine.

The Bluebird (Gipsy III) upon which Miss Delphine Reynolds and Mr. W. G. Pudney are flying to the Cape by the West Coast route.

THE BLERIOT 110: Side view of the long distance monoplane on which Bossoutrot and Rossi established the duration record.

THE BLERIOT 110: Front view showing the clean lines of this machine.

The "Rapid Azur" ready to start from Lyons-Bron Aerodrome.

UNDER THE SHADOW OF THY WING. Flt.-Lt. Comper, Miss Johnson, Mr. Everard, Miss Spooner, and Mr. Franklin, beneath the "Swift" at Leicester

Launched on February 20, 1928, the first of the Short "Calcuttas" has now completed three years of flying, and has in that period completed 1,160 hours of flying and covered 104,400 miles. The machine is still in excellent condition. 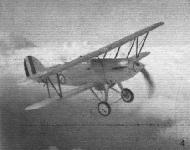 AIRCRAFT TYPES TO BE SEEN IN THE "EAGLE": 4, The Hawker "Nimrod," also with "Kestrel" engine.

H.M. AIRCRAFT CARRIER "EAGLE": This floating aerodrome will be the home, during the Exhibition, of Hawker "Nimrods" and "Ospreys," and Fairey III F's with "Panther" engine, in addition to its normal equipment of Blackburn "Ripons" and Fairey III F's (Napier). 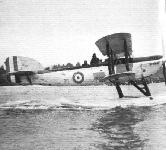 AIRCRAFT TYPES TO BE SEEN IN THE "EAGLE": 5, The Fairey III F, with Armstrong Siddeley "Panther" engine.

The Farman 302 monoplane, powered with a 650 h.p. Hispano-Suiza engine, used by Laloutte and Reginensi in their record flight. 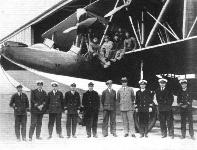 THE SUPERMARINE "SOUTHAMPTON" IN THE ARGENTINE: On March 21 the Prince of Wales and Prince George flew from Buenos Aires to Montevideo in one of the eight Argentine Navy "Southampton" flying-boats. Our picture shows a group taken on the occasion of the first trial flights with one of these machines at Puerto Belgrano last August and includes, from left to right - the Paymaster and Doctor of the Air Station, Lt. Aumann, Lt. Lepnace (pilot), Comdr. Monti, Mr. B. Powell (Supermarine Aviation Works, Ltd.), Comdr. R. Fitzsimon, Comdr. Jensen (Chief of Air Station), Lt.-Comdr. Cappers, and Lt. Mason Lugones.

Will this sight become common? A D.H. Gipsy Moth filling up at a Shell pump in a Jersey street. Jersey has no landing ground, so F./O. D. V. Ivan landed on the beach between First Tower and Millbrook, then folded the wings and brought the machine to a local garage, where he had it refuelled from a Shell pump, Aeroplanes do not attract much attention today, but judging from the crowd that gathered about the machine whilst refuelling, the novelty of fuelling a machine in the same way as cars are fuelled aroused considerable local interest. 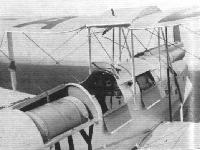 FOR AN ENGLAND - AUSTRALIA ATTEMPT: We referred the other week to an attempt shortly to be made by an Australian, Mr. C. W. A. Scott, to beat Kingsford Smith's flight to Australia. Here we show the cockpit of Mr. Scott's special metal Gipsy Moth (not Puss Moth, as previously reported) to be used on this attempt. It shows the petrol tanks, located in the fuselage and top centre section, which altogether provide a capacity of 101 gals.

SERVICE MOTHS FOR IRAQ: Three views of one of the four D.H. metal Moths (Gipsy II) which have been specially prepared for use by the Iraq Government Air Force. A general view of the machine is shown at the top, while below, on the left, will be seen the cockpits and, on the right, the bomb rack

WELL AWAY: Mr. I. C. Weale in a Prufling at Ivinghoe Beacon on the occasion of a match between the Lancashire Gliding Club and the London Gliding Club. 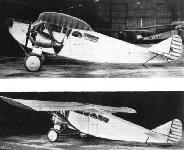 A FLYING BOAT FOR SUBMARINES: The U.S. Navy Department has recently accepted a small flying boat specially designed to be carried in submarines. This machine, shown here, built by Grover Loening, of New York, is a single-seater monoplane fitted with a 100-h.p. engine driving a pusher airscrew. The engine is mounted on hinged struts so as to fold back on to the hull, while the wings also fold back. The whole machine can thus be stowed in a comparatively small "tube" in the parent submarine.

The Cloudcraft "Junior" sailplane has been designed by Mr. Roger Dickson, who was responsible for the Dickson training glider, drawings of which are published by "Flight." The "Junior" is at present being built in the works of the Cloudcraft Glider Company, at Southampton.