As previously mentioned, the Supermarine and Vickers exhibits will be staged on the same stand, and in addition to complete aircraft the Vickers Group will show a wide range of equipment, instruments, armament, etc. However, it is with complete aircraft that we are chiefly concerned here. Of these, Vickers (Aviation) Limited will exhibit two machines, the very large "Victoria" troop-carrier, and a small single-seater monoplane fighter.

The Vickers "Victoria" is not, it should be pointed out, a new type by any means, having been in use by the Royal Air Force for several years, and among its more recent accomplishments being the excellent service which the "Victoria" gave in evacuating over 600 European civilians from Kabul. The type is designed for and used largely by the R.A.F. in the Middle East, and is fitted with two Napier "Lion" engines. During the evacuation of Kabul "Victorias" made, during the period between December, 1928, and February, 1929, 83 flights between India and Afghanistan, covering in the course of this work no less than 33,000 miles.
Technically and historically the "Victoria" is a development - through the 14-seater "Vimy" commercial and the "Vernon" troop carrier classes - of the famous "Vimy" in which the first direct fright across the Atlantic, the first flights from England to Australia and the first flights from England to South Africa were made in 1919 and 1920. The latest version of the "Victoria" is of all-metal construction, a fact which has resulted not only in a saving in structure weight but also in better ability to withstand the climate of the localities in the Middle East for which the machine was chiefly designed.
The fuselage of the "Victoria" is a composite structure, the front portion being a monocoque mainly of wood, and forming the cabin for the 22 troops which the machine is designed to carry. The rear fuselage portion, on the other hand, is a duralumin tube structure, in which plates wrapped around the longerons are used for joining struts and longerons. The covering of the rear portion is fabric.
The wing construction of the "Victoria" is similar, at least in general principle, if not in the matter of actual sizes and dimensions, to that used in a number of other Vickers types. The wing spars have flanges of channel section duralumin, and are joined together by a duralumin web running zig-zag fashion from front to rear flange. By the fact that the web crosses over diagonally, the need for diaphragms disappears, and the web performs the function of these as well as that of spar walls. The advantage of the zig-zag web is that riveting becomes very easy, there being no awkward and inaccessible corners anywhere in the wing spars. The main ribs are girders built of duralumin tubes joined by small duralumin plates which straddle the rib flange tubes. Here and there duralumin sheet is employed for wing covering in such a manner that the covering forms, with the ribs to which it is attached, a form of box rib of great strength, while the metal covering enables the crew of the machine to walk on the portions of the wing thus covered, such as for example, out to the engines mounted on the wings.
As regards accommodation, the front cockpit is of the open type and situated in the nose of the monocoque fuselage. In it are seats and equipment for chief and assistant pilots. Behind their cockpit is the enclosed cabin, which on account of the form of construction adopted, "O" section formers covered with plywood, is particularly free of obstructions. The cabin has accommodation for 22 troops with their military equipment. Alternatively, a bomb load can be carried, sighting arrangements being provided through an aperture below the pilot's cockpit.
The Vickers "Victoria" has an overall length of 59 ft. 6 in., while the wing span of both planes is 87 ft. 4 in., and the wing chord of both planes 13 ft., giving a total wing area of 2,178 sq. ft. The petrol is carried partly in a large tank in the belly of the fuselage (215 gallons) and partly in two wing tanks, which have a capacity of 95 gallons each.
The tare weight of the "Victoria" is 10,030 lbs., and the weight fully loaded 17,460 lbs., giving a wing loading of 8 lbs./sq. ft. and a power loading (on maximum power of 1,140 b.h.p.) of 15-3 lbs./h.p. Performance figures are, unfortunately, not available.
<...>

ALTHOUGH the machines for which Vickers (Aviation), Ltd., are generally known throughout the world are probably mostly their heavy long-distance night bombers, of which the firm has supplied large numbers to the R.A.F., the firm has produced a great many other types, several of which have gained fame abroad. Of the many types produced we have space here to deal with but a very few. It might be recalled, however, that a Vickers "Vespa" (Bristol Pegasus engine) holds the world's altitude record (pilot. C. F. Uwins, of the Bristol Company) of 13,404 m. (43,976 ft.).

WITH THE R.A.F. IN IRAQ: We show above one of the Vickers "Victoria" aerial transports (two 450 h.p. Napier "Lion" engines) at Hinaidi aerodrome. These machines, which can carry 25 soldiers complete with equipment, in addition to the crew of two, have done excellent work, not only in transporting troops, but in conveying sick and wounded from one part of the country to another in a matter of hours as against days by other means of transport.

A SERVICE CRUISE: One of the Vickers "Victoria" troop carriers of No. 216 (Bomber Transport) Squadron. R.A.F., landing at Tambacounda during the flight to West Africa.

THE VICEROY IN JODHPUR: For the first time in history a Viceroy has arrived in state by air in the Rajputana State of Jodhpur. H.E. Lord Willingdon, accompanied by Her Excellency and staff, arrived there in his own Avro 10. In his speech at the official banquet His Excellency said that Jodhpur Aerodrome was an important link in the chain of Imperial communications and was one of the finest in the East, being equipped with an excellent hotel and every modern necessity for air transport. He also mentioned that there were 15 landing grounds in the State. He congratulated His Highness the Maharaja on the achievements or his ten years' rule.

The latest version of the Vickers Victoria is fitted with two Napier "Lion XI" engines and Handley Page automatic slots. The wheels under the tail skid are temporary, and not permanent fitments.

AIR RESCUES IN AFGHANISTAN: The Vickers-Napier "Victoria" troop carrier, which has been instrumental in transferring the British and other European women and children from the danger zone of Kabul (Afghanistan) to Peshawar, India.

Vickers "Victoria" (Two Napier "Lions"). A large part of Vickers work in aviation has been the production of giant machines, and the "Victoria" is one of their largest, strongly stamped with the Vickers style. It is another member of the "Vimy" family, and is actually a very large version of the "Vimy Commercial" used some little while back on the London-Continental air services. The "Victoria," which has the same span as the "Virginia," carries two pilots and 23 troops. They are used for troop transport and ambulance work by No. 70 Squadron (Iraq) and No. 216 Squadron (Middle East).

JUST AN ILLUSION. This is not a case demanding a Court of Inquiry but simply a between-the-wars trick of the R.A.F. in the Middle East to give some welcome shade to single-seaters by manoeuvring the smaller aircraft as close as possible to the bigger 'planes. This excellent example of the manoeuvre shows a first-contract (E8249), all-silver Sopwith Snipe 7F.1 (230-h.p. Bentley B.R.2 rotary radial) of No. I (Iraq) Fighter Squadron photographed at Hinaidi, Baghdad, in 1926, sheltering under the 87-ft. 4-in. span of the second production (J7922) Vickers Victoria Mk. I (two 570-h.p. Napier Lion " broad arrow" twelve-cylinder inlines) of No. 70 (Middle East) Transport Squadron, based at Hinaidi. Note the early type of Vee-fronted rudders. Victorias could carry twenty-two troops, plus two crew, and took part in many pioneer military air lifts and long-range "showing-the-Flag" exercises. The 121-m.p.h. Snipe of 1918 remained in service until the late 1920s, and was the last R.A.F. fighter to be powered by a rotary aero engine.

Dignity and impudence are personified, on the Vickers stand, by the "Victoria" troop-carrier and the single-seater interception fighter.

THE SCHOOL HOUSE: This Vickers "Victoria" (Napier "Lions") is used at the Central Flying School for instrument-flying instruction.

A formation of Victorias which flew over during the afternoon.

THE "STAR TURN" AT THE R.A.F. PAGEANT: Below, a small military post defending an important railway bridge is attacked by Arabs, and escapes on a Vickers Troop-Carrier, sent to their assistance. Sopwith Snipes attack the enemy whilst the garrison emplane, and a demolition party place charges to destroy the bridge, which, as soon as the Troop-Carriers and escort get away, blows up, as shown above. 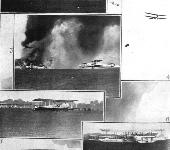 THE R.A.F. DISPLAY: Bombing of the Village of "Hunyadi Janos in Irquestine." In 3, even the church has caught (in spite of the official programme). Vickers "Victorias" are seen in 3, alighting with troops and machine gun while 4 illustrates how food and medicine is dropped by parachute. Troops are deplaning in 5, and getting ready to take part in the fight, and finally, women and children are taken away to safety by the "Victorias" in 6.

THE SCHOOL ROOM: A view inside the "Victoria" showing the unique "back to front" arrangement for instruction.

EVACUATION OF INHABITANTS OF KABUL: This picture is a reproduction of a painting by Mr. Johns, representing Vickers "Victoria" Troop Carriers with Napier engines flying over the Kabul-Peshawar area. A reproduction in colour of this painting has been issued jointly by Vickers (Aviation), Ltd., and D. Napier & Son. Ltd., and we are asked to state that on application to Vickers from any of the officers and personnel of the R.A.F., &c, who took part in the Kabul operations, a copy of the reproduction will be sent, post free.

On the Vickers "Victoria": The upper sketch shows spar hinge for folding the wings. Note how fabric is laced, and also interplane strut attachment. Below a typical fuselage joint in metal. 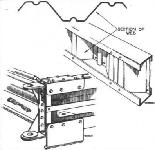 In many Vickers machines use is made of a special form of spar construction, with channel section flanges and zig-zag webs.

The ribs on the "Victoria" are of duralumin tube. The metal covering in certain places reinforces the ribs and also serves as a platform for walking to engines, etc.

The interplane struts on the "Victoria" are formed from thick duralumin sheet, riveted along both edges. 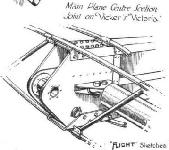