THE Military Aircraft Factory of Prague, whose chief designer is M. Smolik, will be represented by no less than three complete aeroplanes - the S.16, the S.18, and the S.20.

The. Vojenska S.16 is a long-distance reconnaissance or day-bombing biplane characterised by single-bay wing bracing in spite of a considerable wing span. It is fitted with a 450 h.p. Lorraine-Dietrich engine, but can also be supplied with Napier "Lion," Hispano-Suiza, Renault, or B.D.
The machine is of all-metal construction, except for the covering, which is fabric. The fuselage is of steel-tube construction, joined together in two places to form three separate sections - the engine bearers, the cockpit portion, and the rear portion. The petrol tank is placed inside the fuselage, and is stated to be protected by a rubber covering, apparently somewhat after the style of the Imber self-sealing tank. This tank has a capacity of 400 kg. A gravity tank holding 174 kg. is placed in the top centre section. This quantity of fuel suffices for a flight of five hours' duration at full throttle. The armament consists of one fixed Vickers gun, and two Lewis guns on the usual gun ring. The wings are of Duralumin construction.
Following are the main characteristics of the Vojenska S.16: Wing span, 15-5 m.; length overall, 9-2 m.; wing area, 47 sq. m.; weight, empty, 1,200 kg.; load, 1,050 kg. (military load, 448 kg.); total loaded weight, 2,250 kg. Top speed at ground level, 225 km./h.; speed at 5,000 m., 194 km./h.; service ceiling, 6,500 m.; range, 1,237 kms.
<...>


THE Military Aircraft Factory of Prague was reported in our issue of December 2 to exhibit three machines. Actually, however, but two were shown, the "absentee" being the type S.20 single-seater fighter with Skoda-built Hispano-Suiza. Presumably there was room for no more machines on the Czechoslovak stand, which already contained one Aero and two Avia machines.
Of the two machines shown by the Military Factory one was a little school machine with 60 h.p. Walter engine. This did not present any unusual features except in the arrangement of the wing bracing. Two of the accompanying photographs show the S.18, and from these it will be seen that the top plane is braced, in addition to the cabane struts, by a pair of Vee struts running to the point where the lower front spar meets the fuselage, whereas there is no attachment to the lower rear spar at this point.
<...>

AMONG the machines exhibited at the Paris Aero Show recently was an all-metal two-seater incorporating forms of construction of somewhat unusual type. This was the Vojenska Smolik 16, a long-distance reconnaissance biplane with 450 h.p. Lorraine-Dietrich engine. It was not possible to give a very detailed description of machines exhibited in Paris, but it is thought that a reference to the Vojenska S.16 may be of interest in showing how one Czechoslovak firm attacks the problems of metal construction. It should be pointed out, for the benefit of those who are not already aware of the fact, that the Vojenska Tovarna Na Letadla of Prague, is the Czechoslovak Military Aircraft Factory, and therefore corresponds somewhat closely to our own Farnborough establishment as it was when it was called the Royal Aircraft Factory.
The Vojenska S.16 is produced in two forms, the parent type being a long-distance reconnaissance machine, while the type 16b is a day-bomber. The constructional details are the same in both cases, only the equipment (and certain minor alterations) being different. Aerodynamically the S.16 is an orthodox biplane, the only unusual feature being that in spite of a wing span of 15-5 m. (50 ft. 10 ins.), but a single pair of interplane struts are provided on each side. The chord is relatively narrow, giving the wings a high aspect ratio (the "span-loading,” or span square divided by weight) is 0-52 in British units. The great length of unsupported spar, or free spar lengths, is somewhat relieved by a form of strut bracing used in England mainly on torpedo 'planes.
As regards its main structure the S.16 is of mixed construction in that the fuselage is of steel tube construction while the wings are of Duralumin. All surface covering is in the form of doped fabric.
The fuselage is composed of three separate units - the front portion in which is comprised the engine mounting, etc., a middle portion containing the two cockpits, and the tail portion, which is a plain wire-braced girder, in which the vertical and horizontal struts are pin-jointed to the tubular longerons, no welding being employed for parts that have to resist stresses of any magnitude. The cockpit portion of the fuselage is partly wire braced and partly triangulated by diagonal tubes, while the front has built-up bulkheads in place of the normal tubular members. The construction of these bulkheads or formers can be seen in one of our photographs. They are of box section, lightened by drilling numerous holes. A double fireproof bulkhead separates the engine from the next compartment, which contains the main petrol tank. This has a capacity of 400 kgs. (880 lbs.), and is covered with rubber as a protection against bullets. A service tank with a capacity of 174 kgs. (383 lbs.) is placed in the centre of the top plane, giving a total petrol capacity of 574 kgs. (1,263 lbs.), which is sufficient for a flight of 5 1/2 hours at full power.
The wing construction, as already mentioned, is based upon the use of Duralumin. The main spars - which, incidentally, are identical in both wings and front and rear spars alike - are of plain box type, not the drawn rectangular type of Duralumin spar which was so popular with French designers some years ago, but a built-up box. The wing construction is fairly clearly shown in some of our sketches, which also illustrate the spar details. It seems doubtful whether this form of spar is very economical from the point of view of strength for weight, although doubtless it is a fairly cheap manufacturing proposition. The length of unsupported spars is considerable in the S.16, and the angle of the wing bracing wires is rather small, so that one would expect compression loads to be not inconsiderable.
The wing ribs, also of Duralumin, are of trough section, the edges facing outward. The manner of attaching them to the spars is illustrated in our sketches. The actual wing portion sketched is the starboard lower plane wing root, which runs from the fuselage to the attachment of the diagonal struts supporting the undercarriage. All the main fittings, it should be pointed out, are of steel, such as the long straps shown in the sketch, the lugs for attaching the spars to fuselage and outer spars, the spar end boxes, etc. In the ribs illustrated the upper and lower flanges are braced by vertical distance pieces only, but in the main ribs these, although fundamentally of the same type, are arranged in the form of a Warren girder so as to provide triangulation. One would imagine that in spite of standardisation of a great number of small parts the method of supporting the ribs from the spars would be somewhat expensive. Compared with certain French and other forms of metal construction, that employed by the Vojenska firm appears fairly simple and cheap, and it is believed that the particular type of construction has given good results in actual service. The main point is that Czechoslovakia has definitely entered the field of metal construction on original lines, and doubtless the future will see considerable progress in this direction.
The main data relating to the Vojenska S.16 have already been published in FLIGHT, and also in the table of particulars given in the last issue of THE AIRCRAFT ENGINEER. It will, therefore, suffice if we recall here that the machine has a top speed of 225 km./h. (140 m.p.h.), a service ceiling of 6,500-7,000 m. (21,300-22,900 ft.), and that the duration is 5-5 hours at full throttle, corresponding to a radius of 1,237 km. (770 miles). The weight empty is 1,200 kgs. (2.640 lbs.), and the total loaded weight 2,250 kgs. (4,950 lbs.).

Two Vojenska machines. In the foreground the S.16, a long-distance reconnaissance biplane with 450 h.p. Lorraine engine. In the background the little S.18, a school machine with 60 h.p. Walter engine.

The Geared Bristol "Jupiter" Abroad: The Czecho-Slovak "Smolik" S.16 biplane which, fitted with a geared "Jupiter," obtained the first prize in the Petite-Entente competition for reconnaissance or day bombing machines adopted by the air services of Jugo-Slavia, Roumania, Czecho-Slovakia and Poland.

THE VOJENSKA S.16: On the left, the all-metal tail, and on the right a front view of the fuselage in skeleton 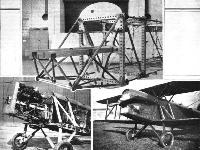 THE VOJENSKA S16: These three photographs show progressively the engine mounting, the same with engine installed, and the complete machine

Constructional details of the wing structure of the all-metal Vojenska S.16.