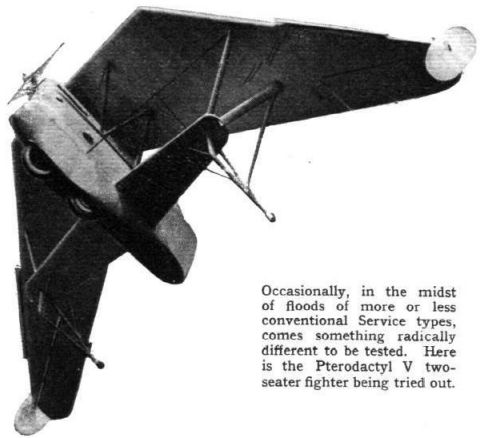 THE FIGHTING "PTERODACTYL"
Coupled with a very wide speed-range, the latest Westland Machine has an exceptionally wide Field of Fire
By C. M. POULSEN

From a military point of view, the "Pterodactyl V" has an advantage over the orthodox aeroplane in that the rear gunner can cover practically the whole of the rearward hemisphere with his machine gun. The only obstructions toward the side are the wing-tip rudders. They are not of great area, and if an attacker were trying to "hide" behind one of them, he would be visible to the pilot, who would then only need to lift that wing tip to bring the other machine into full view and field of fire. Owing to the steep slope of the stern of the nacelle, the rear gunner can fire straight downwards while the machine is flying level, and a little manoeuvring by the pilot will quickly bring into view any object which may be in need of "spraying." Close team work by pilot and gunner is facilitated in the "Pterodactyl" by the fact that the two cockpits are very close together, although on slightly different levels. In this respect the machine should be as good as the old Bristol Fighter of the war period.
Aerodynamically and structurally it is a little more difficult to express an opinion of the "Pterodactyl V." The design avoids the drag of the tail, and the two main undercarriage wheels are in tandem, and, moreover, almost entirely enclosed, so that their drag must be very low. Against that one has the two wing-tip skid structures, which look capable of producing quite an appreciable drag, and the "blister" under the front part of the nacelle, caused by the condenser. This might disappear if surface coolers were fitted. The upper wing is very thick over part of its span, although thin in the centre (to give the pilot a good view), and may be of slightly higher drag than the top wing of a normal biplane. On the other hand, the lower wing is diminutive in size, chord as well as thickness, and probably does not add a great deal of drag. On the whole, I think one would guess the “Pterodactyl V" to have about the same drag as that of an orthodox biplane of the same size and carrying the same load. If the weight is about the same as that of a comparable normal type, the performance should then also be about the same, with the extra advantage of the remarkable field of fire, which is unequalled in any normal two-seater, and only surpassed in a heavy night-bomber multi-seater with a gun position in the extreme stern.
Whether or not the structure weight of this machine is greater than that of the straight biplane I cannot say. The fact that the upper wing has a pronounced change of direction in its front spar should tend to make for extra weight, but the load distribution over a back-swept wing may be very peculiar, and may tend to relieve this load, or it may have the effect of aggravating it. Mr. H. A. Mettam, in charge of the stress department at Westlands, must have had an interesting time calculating the stresses. His mouth is, however, sealed for the present owing to the fact that the "Pterodactyl V" is still on the Air Ministry's Part Publication List, which stipulates that no mention may be made of the internal structure or of weights, etc.
Altogether, the Westland-Hill combination, as exemplified in the “Pterodactyl V,” has produced something which should contribute a good deal, not only to the knowledge of aircraft design, but also to the military effectiveness of British aircraft. At a time when the expansion of the R.A.F. is beginning, this is something to be grateful for. New ground has been broken, and whether the experiment is a complete or only a qualified success can only be known after extensive tests. But it is good that the attempt should have been made. 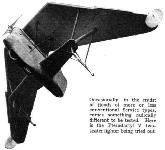 Occasionally, in the midst of floods of more or less conventional Service types, comes something radically different to be tested. Here is the Pterodactyl V two-seater fighter being tried out.

This exciting air-to-air shot of the Pterodactyl V gives a clear impression of the wing planform and rear gunners position. 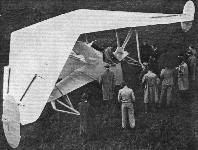 Prof. Hill with the Westland-Hill Pterodactyl Mark V - the last of the series of tailless types designed by him and intended in this case as a two-seater fighter. Earlier examples were in the light category.

The first form of the Mk V, with manufacturers marking P8 and no fin area on the wing tips.
THE FIGHTING "PTERODACTYL": Probably never before has a military type of aeroplane been produced in which a crew of two has been given such unrestricted fighting view and field of fire as in the new Westland-Hill "Pterodactyl V." This two-seater fighter is fitted with the Rolls-Royce steam-cooled "Goshawk" engine of 600 h.p. or so, and should be a formidable opponent from a performance and a fighting point of view.

The Mk V with fins added to the wing-tip rudders and a fresh coat of paint. The original angular intake remains.

1931 was the year in which it seemed the estimable Capt. Hill's efforts were to be rewarded, when his two-seat Pterodactyl Mk.V proposals gained Air Ministry acceptance, with the one proviso that the machine be powered by a 600hp Rolls-Royce PV.G, later known as the Goshawk. With the relevant paperwork completed, work on the sole Mk. V, K 2770, commenced in early 1932, against Air Ministry Specification F.3132. Completed in the autumn of 1932, K 2770 started taxiing trials, only to have the left wing collapse. The cause of this was traced back to a design stressing error, which had been unearthed by a bump on the grass airfield. Thus, another sixteen months were to pass before the machine actually took to the air for the first time, in May 1934. Dogged by the now traditional pitch control sensitivity problems, an unreliable engine and a top speed of 165mph at 15.000 feet, nearly 20mph slower than that of the RAF's then standard Hawker Hart day bomber, it is little wonder that the whole project was quietly abandoned.

In its final form, the Mk V had a much extended nose, revised exhaust system and additional underwing fins.

The penultimate Pterodactyl, the Mk VII, was a twin-engined flying boat. It never passed beyond the project stage.