Prototype Westland Lysander K6127 flying from Yeovil on October 15, 1936. It made its maiden flight, from Yeovil, on June 15.

An aerial view of Portsmouth Aerodrome taken on June 2, 1932, the day that it was opened. In addition to the display aircraft some 70-odd visitors arrived during the afternoon and were parked at the farther end.

The GAL 41 pictured at the Royal Aeronautical Society’s Garden Party at Fairey’s Great West Aerodrome on Sunday, May 14, 1939 - its public debut. The pressure-cabin Monospar was designed to collect data for a full-sized sub-stratosphere airliner.

The GAL 38 Night Shadower in its original form.

G-ACMT, the prototype Airspeed Envoy, makes a low pass over Portsmouth shortly after its first flight in June 1934. The retractable undercarriage was a novel feature. 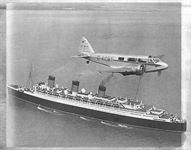 Series 2 Envoy G-ACMT flying over the Queen Mary over Cowes Roads in March 1936. Aboard the Envoy were Messrs N. S. Norway and Airspeed designer A. Hessell Tiltman.
LINERS OF TWO ELEMENTS: This fine aerial picture of the Queen Mary was secured by Flight's photographer over Cowes Roads last week. The Series II Envoy - from which, incidentally, the Airspeed Company's joint managing directors, Mes N. S. Norway and A. Hessell Tiltman, were viewing the liner - was flown by Flt. Lt. C. H. A. Colman.

Monospars on the tarmac outside the General Aircraft works at Croydon. G-ACTS was an ST-10, built in 1934 and flown with Portsmouth, Southsea & Isle of Wight Aviation Ltd. The Croydon factory closed down in 1933 and GA moved to better premises at Hanworth the following year.

The side-by-side two-seater CW Cygnet flying in its original form in 1937. At the time it was the smallest British all-metal stressed-skin aircraft. Priced at £895 with the 80-90 h.p. Cirrus Minor engine, it attracted little interest; the design was sold to General Aircraft, who further modified the aircraft