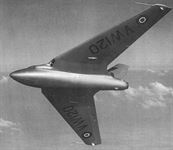 The third prototype D.H.108, VW120. Note the lines of pressure-plotting points under the wings, which were connected to recording instruments within the fuselage.
DE HAVILLAND DH.108 SWALLOW. The DH.108 was a swept-wing tailless machine designed for research. Three aircraft were built, and they provided much useful data for the Comet design . The first machine, TG283, was intended to determine the low-speed characteristics of the swept-wing, and had fixed open-wing slots. It flew for the first time on 15th May 1946, piloted by Geoffrey de Havilland, but crashed on 1st May 1950. Maiden flight of the second aircraft, TG306. was on 25th September 1946 (also piloted by Geoffrey de Havilland). It was built for high speeds and the wing slots were retractable. It crashed only two days later (27th September 1946). The third prototype, VW 120, was another high-speed machine, which first flew on 24th July 1947 in the hands of Group Capt. John Cunningham. It was in this aircraft that John Derry established a new 100-km. closed-circuit record of 605.23 m.p.h. on 12th April 1948, and on 6th September 1948 officially exceeded the speed of sound for the first time in this country. This aircraft was in fact the first aircraft in the world to fly supersonically with a conventional aircraft engine, i.e. an aspirated engine as opposed to a rocket. It crashed on 15th February 1950.

Geoffrey de Havilland Jr flying TG306, the second D.H.108. It was first flown on August 23, 1946, from Hatfield and it soon became apparent that it was faster than the first aircraft.

Another view of TG306 showing the much-modified cockpit canopy.

TG283, the first prototype D.H.108, in October 1946. Note the tufts on the top surfaces of the wings for determining airflow behaviour.

TG306 at high speed over Hatfield.

Another view of the same aircraft, taken in October 1946 and showing the tufts on the upper wing surfaces. Anti-spin parachutes were fitted in the purpose-built wingtip containers but were later removed.

VW120 in the SBAC Challenge Trophy Race at Birmingham on August 1, 1949. It carries the race number 90, new fin flash and ejection seat triangle. The chap on the wing is obscuring the KEEP OFF legend!

The same aircraft in its original configuration, with the anti-spin parachutes in wingtip containers.

Three-view of TG283, the first prototype D.H.108, built to investigate slow-speed characteristics, sporting the safety factors considered necessary in view of the RAE’s instability warnings about tailless aircraft.
TG306, the high-speed second prototype, showing the final sliding-hood modifications, in preparation for its attempt at the world’s absolute speed record.
Three-view of VW120, the third of the D.H.108 tailless trio, embodying the modifications made to ensure it was a stronger aircraft for a sustained high-speed research programme.