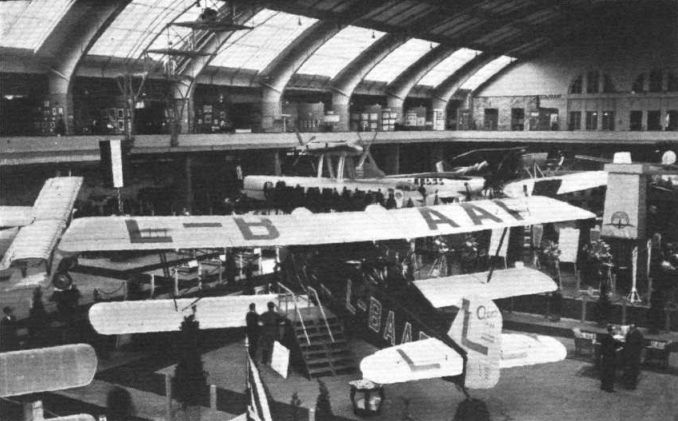 This machine, which was also exhibited at the Paris Show held in the summer, is of a type used on the Czech State Airways, and is a normal single-engined biplane, largely of wood construction. ДальшеMore>>> The engine is a Walter "Jupiter," and the cabin has seats for six passengers, while the cockpit, placed aft of the cabin, has two seats for pilot and navigator, or two pilots. The machine is not unlike the D.H.61 in a general way, but the lines are not very pleasing, or possibly it may be the rather crude colour scheme chosen which spoils the appearance of the machine. The cabin appears very comfortable, and the machine is reported to have proved very reliable in service.

A Czech Commercial Machine: The Aero A.23.

IN THE GRAND PALAIS: View looking South. In the foreground the Aero cabin biplane, as used on Czechoslovak air lines. Beyond, the CAMS flying-boat. On the right, the tail of the twin-hull Savoia S.55.

The Aero A.38, one of the Czech-built aircraft used by C.L.S.