With its large dimensions and lines expressive of great strength, not to say brutality, the Rohrbach "Romar" is, perhaps, the most imposing machine in the whole of the Berlin show. We understand that three of these machines have been built, of which one is exhibited, while a second is at present undergoing flying tests at Trawemunde, where it is said to have beaten all existing records for flying-boats by getting a weight of 18-5 tons into the air.
Generally speaking, the Romar resembles previous Rohrbach flying-boats, of which the Beardmore "Inverness" will be one example known to FLIGHT readers. Modifications in design are, however, noticeable, such as, for instance, the very high placing of the engines, higher even than in previous types, and the pronounced taper of the monoplane wing, which is of tremendous chord and thickness at the root, but tapers to quite small chord and thickness at the tips
The Rohrbach flying-boats have never been of very great beam, but in the Romar it would seem that Dr. Rohrbach has reached an irreducible minimum, and the hull of the machine resembles, as regards its length-to-beam ratio, the "plank on edge" type of yacht familiar to English yachtsmen forty or fifty years ago. The reduction of beam in the Romar has been accomplished by a change in the planing bottom from the flat bottom originally used by Rohrbach to one having a pronounced Vee. Moreover, the Vee is given a pronounced hollow, doubtless in order to reduce the shock on alighting, a feature probably connected also with the very narrow beam. It should be remembered that Dr. Rohrbach has, for many years, been the apostle of high wing loading, which is merely another way of saying that he has advocated high landing speeds. Whether one agrees with Dr. Rohrbach in this view or not - and there are those in this country who maintain that without a very high wing loading the Rohrbach machines would not be possible at all - the fact that the machine does have a high landing speed must, of necessity, call for a very careful design of hull in order to prevent the bottom from collapsing under the shock of alighting in the sea. An examination of the machine exhibited gives one the impression that Dr. Rohrbach argued that it would in any case be impossible to give the hull a beam sufficient for lateral stability on the water without the assistance of wing floats, and this being the case, it would be preferable for purposes of alighting to keep the beam down to the minimum necessary to enable the machine to "un-stick," and to rely upon the increased volume of the wing floats to make up for the lateral stability lost by reducing the beam of the main hull.
Another feature of the machine which forcibly impresses one is the relatively short tail leverage. The monoplane wing is of very great chord at the root, and the distance from main trailing edge to tail plane leading edge appears to be less than one chord length. The wing section employed does not appear to be one which would be likely to give a particularly small centre of pressure travel, and with the high position of the centre of thrust, which one would expect to cause a very considerable difference in trim between the "engine-on" and "engine-off" condition, the tail leverage looks to English eyes a good deal on the short side.
Constructionally, the Romar follows previous Rohrbach practice in that the wing is constructed of a main box spar very strongly built up from flat sheet and channel section, to the front and back of which are bolted the leading and trailing edges of the wing. The hull is flat-sided and flat-topped, the only portion which appears to require panel beating being the curved hollow planing bottom. As in previous Rohrbach machines, Duralumin is the material used throughout, except for certain highly-stressed fittings and bolts, and certain struts such as those to the wing floats and those supporting the engines.
The hull is divided by bulkheads into watertight compartments, and some of them are provided with very ingenious bulkhead doors, which are opened almost as quickly as an ordinary door, but which yet make a watertight joint when closed. The details of one such door are shown in some of our sketches.
The extreme nose of the hull is used for stowage and is separated from the wireless compartment by a bulkhead door. In the aft wall of the wireless compartment is another bulkhead door communicating with the pilot's cockpit, which is totally enclosed. A feature of the Romar is that a special cockpit has been set aside for the engineer, in which are all the instruments, etc., relating to the power plant.
The passengers' cabin has seating accommodation for 12 passengers, and is divided by a bulkhead into two sections, of which the front cabin has four seats and the rear cabin eight.
The leading dimensions and weights of the Rohrbach Romar are as follows :- length, o.a., 22 m. (72-2 ft.); wing span, 36-9 m. (121 ft.); wing area. 170 sq. m. (1,830 sq. ft.); draught with normal load, 1-3 m. (4-26 ft.). The petrol tanks have a capacity of approximately 7,900 litres (1,740 gallons); and the oil tank capacity is 400 litres (88 gallons). The crew consists of one navigator, one pilot, one wireless operator and one engineer, and the pay-load is 12 passengers with their luggage. The total loaded weight is approximately 19,000 kg. (41,800 lbs.), with which load the range is stated to be approximately 4,000 km. (2,480 miles). No performance figures are yet available, as the machine is, as already mentioned, at present undergoing tests.

SEAWORTHINESS TESTS OF THE ROHRBACH "ROMAR": View of the machine at moorings. Note the narrow beam of the hull, and the high position of the thrust line of the three engines.

The larger Romar was designed for transatlantic flying, but Lufthansa’s three examples were relegated to Baltic services.

SEAWORTHINESS TESTS OF THE ROHRBACH "ROMAR": 1, Taxying in a rough sea. 2, collapse of starboard wing float strut. 3, machine swinging around, with starboard wing partly submerged. As the wing is watertight, the machine did not capsize. All these tests were carried out after the machine had dragged her moorings in a gale and drifted on to the beach, as shown in 4.

The Rohrbach "Romar" flying boat has a hull of very narrow beam and negligible lateral stability on the water. The wing floats are large to make up for this.

A German Air Yacht: The large Rohrbach "Romar" flying boat of LuftHansa. It is fitted with three B.M.W. engines of 800 h.p.

NOT A CRUISER: This photograph showing the Rohrbach "Romar" hull from in front gives an excellent idea of the narrow beam. The bottom has a pronounced vee. 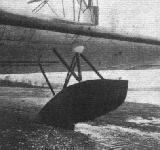 Wing float of the "Romar": This photograph shows the port float. It was the starboard float diagonal strut that collapsed.

On the Rohrbach "Romar" the engines are mounted high above the wing on steel tube structures of rather "stilty" appearance.

Rohrbach is showing a large model of the Romar.

Water-tight bulkheads are used extensively on the Rohrbach "Romar." To facilitate inter-communication between compartments, doors of special design are used, which, although quickly opened, provide water-tight joints when closed. Details of the locking arrangements are shown, the central handle operating the radial members. The rubber strip shown at C is pressed against the metal frame, and in so doing expands and makes a tight joint.
<<   0/0   >>