Still fitted with its original shorter fin and with registration F-WEEE applied, the SE.1010 makes its first short hops at Marignane on June 29, 1948, in the hands of test pilot Jacques Lecarme. At the time, Lecarme had only recently converted on the de Havilland Vampire, which was to be manufactured under licence by SNCASE.

The SE. 1010 photographed from the LeO 453 accompanying it on its ill-fated last flight, on October 1, 1949. Shortly after this was taken, the pair separated and the SE.1010 undertook asymmetric power tests. The tragic result was a flat spin into a vineyard. Note the taller revised fin.

The sole SE.1010, F-WEEE, displays its sleek lines during its extensive trials programme in 1948-49.

Bearing the number “25” on its forward fuselage, F-WEEE is inspected by members of the public at the 18th Salon de l’Aeronautique at Paris in May 1949. According to British weekly Flight, the type “contrasted with the more corpulent transports”present; the magazine also noted its Mercier ailerons, “the effectiveness of which was convincingly demonstrated by large roll-angles without visible trace of slewing or directional deviation”.

Engineers look on as the prototype’s 14R engines are run outside the distinctive hangar at Marignane in early 1948. The 14R radial was originally a product of the Gnome-Rhone company, which was nationalised in August 1945 to become the Societe Nationale d’Etudes et de Construction de Moteurs d’Aviation (SNECMA).

The prototype undergoes undercarriage-retraction tests on the ramp at Marignane. Although a large aircraft, with a span equal to that of an Avro Lancaster, the SE.1010 was designed to be operable from relatively small semi-prepared airfields, and would have carried a spare main wheel and tail wheel as standard equipment.

Yet to have its registration applied to fuselage and wings, the SE.1010 undergoes maintenance alongside Nord NC.702 F-BBFR at Marignane some time before its first short hops in June 1948. 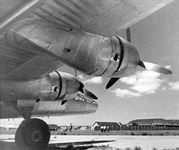 The SE.1010 at the SNCASE airfield at Marignane, near Marseille. Like many post-war French aircraft, the SE.1010 gave the lie to the old adage “if it looks right, it flies right”.

The prototype SE.1010 under construction in the Marignane hangar on January 20, 1948. In the foreground is the fuselage of one of the two production examples, neither of which was ever completed; in the background is the fourth SE.200 Amphitrite six-engined flying-boat, which was also never completed and was ultimately scrapped.

The two SE.1011s in the assembly hall at Marignane on February 28, 1950. Note the revised, shorter "drooped B-29" nose section fitted to the central airframe, just visible at the far right of the photograph. Neither of these two “production models” was ultimately completed, and the programme was cancelled shortly afterwards.

In order to provide as good a performance as possible from short semi-prepared airfields, the SE.1010 incorporated flaps along the trailing edge of the 16 per cent thickness-to-chord-ratio wings.

Ailerons don’t come stranger than Mercier - both in principle and in practice on the SNCASE SE.1010.

TOP The SE.1010’s unusual Mercier ailerons were fitted to the tips of the wings, allowing the flaps to run the entire length of the trailing edge.
BOTTOM The tailwheel doors were articulated, with a fold in the door when in the wheel-down position, to allow full travel of the elevators on the low-set tailplane.

The SE.1010 undertook asymmetric power tests. The tragic result was a flat spin into a vineyard, the aftermath of which is seen here.

SNCASE SE.1010. Characterised especially by its long glazed nose and the unconventional Mercier ailerons fitted to its elegantly upswept wingtips, the SE.1010 was of normal all-metal construction with a circular-section pressurised cabin
<<   0/0   >>