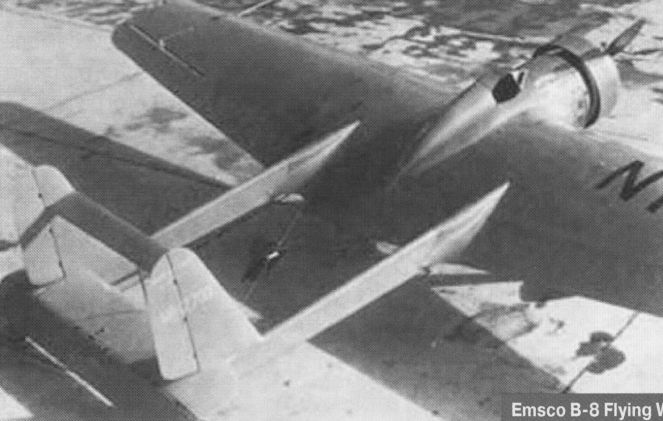 Probably the most unorthodox machine entered for the race is the Vance "Viking," or "flying wing." This machine is at present being "groomed" in Southern California by Lt. Murray B. Dilley, ДальшеMore>>> who is on leave from the U.S. Army Air Corps. Lt. Dilley obtained the machine and its manufacturing rights from the estate of the late Claire Vance. It was entered in the Bendix Trophy Race in 1932, but was withdrawn owing to trouble with the petrol system. The machine, for which several startling claims were made, was never given a fair test before Vance's death.
The appearance of the aircraft may be seen in the accompanying illustrations. Fuel and cargo is carried within the wing itself. Outriggers, or booms, are bolted to the rear main spar of the centre section and carry the tail surfaces. Two tail planes are fitted, the lower being fixed and carrying the elevator and the upper being adjustable from the pilot s cockpit. A chrome molybdenum tubing structure covered with sheet duralumin is used for the centre section, and the outer portions of the wings use wooden box type spars, the covering being 1/8 in. plywood.
According to a report in Aero Digest, the engine originally fitted was a supercharged Pratt and Whitney "Wasp” with a blower ratio of 12:1 and a gear ratio of 6:1. At 2,200 r.p.m. the maximum power is 660 h.p. A Hamilton Standard variable pitch airscrew is employed. Originally designed as a high-speed, high-altitude freight carrier, the machine is a single-seater. At present the petrol system connecting the fourteen wing tanks, capable of carrying about 1,000 gallons of fuel, is being checked, and all connections replaced. An automatic pilot is being installed. The theoretical ceiling is said to be 35,000ft., and the cruising speed at sea level 160 m.p.h. This latter figure will increase with altitude.
Lt. Dilley intends to undertake a "round" non-stop flight between Los Angeles and New York, and to follow this up with an attempt on the long-distance record, and the solo endurance record.