FOR the first time since the very early days of the firm the Supermarine Aviation Works of Southampton have produced a land aeroplane, all the energy of the firm ДальшеMore>>> having hitherto been devoted to the production of seaplanes or amphibian flying boats. It is, perhaps, significant that the first aeroplane of Mr. Mitchell's design should have been a light 'plane, and it is to be hoped that once he has started on light 'planes he will look into the problem of the light seaplane for which, if it be an engineering possibility, there should be at least as good a market as for light aeroplanes.
The Supermarine “Sparrow" is a tractor biplane with large top plane and small bottom plane; single-bay bracing with raked N-struts is employed, and the machine is fairly normal in every way. The power plant is a Blackburne radial engine. We would call attention to a small change which has been made in the rudder since our general arrangements were made. In the scale drawings a high, narrow and rather pointed rudder is shown, while in the photograph it will be seen that the rudder actually fitted is of a more rounded shape.
The fuselage of the Supermarine "Sparrow" is a flat-sided ply-wood covered structure with cambered deck. The top longerons do not, as is usually the case, run quite horizontally, but slope upwards slightly from a point behind the rear cockpit to the stern post. A somewhat similar arrangement is sometimes met with in ships' 'planes, the object being, of course, to allow the machine to pull up very quickly owing to the very large angle which the wings form with the ground. Presumably much the same object was in the mind of Mr. Mitchell when he designed the "Sparrow," and the very large angle, plus the fact that variable flap gear is fitted, should enable the Supermarine biplane to do rather well in the getting off and alighting competitions, as well as in the slow-speed tests. Not that there is any reason to expect that the machine will be inferior in the matter of top speed, but with a wing loading of rather less than 3 1/2 lbs./sq. ft. and fairly standard biplane bracing, it is to be expected that it will shine at the lower rather than at the high end of the scale. On the other hand, Mr. Mitchell has chosen the somewhat unusual arrangement of having different wing sections on top and bottom 'planes, and it appears likely that in this way it is in the power of a designer to make not inconsiderable changes in the slope and shape of the biplane L/D curve.
However, this is rather digressing from the subject of the construction of the Supermarine "Sparrow." Except for the cocked-up rear portion the body is of normal type, and this may be said also of the wing construction. The spruce spars are of I-section, the ribs of standard design, and the drag bracing of piano wire with compression ribs of specially reinforced construction. The ailerons run the whole length of the wings, and are fitted on both planes. Only the lower flaps are operated by cables and cranks, the movement being transmitted to the top ailerons by two struts on each side. The flaps, as already pointed out, are used as variable camber devices, the method of operating them being particularly simple. On the longitudinal rocking shaft carrying the "joy-sticks" is mounted a short column from which run the aileron cables. The inner ends of these cables are attached to a short yoke, having an internal thread engaging with a vertical worm. The upper end of this worm carries a hand wheel, by the rotation of which the yoke is raised and lowered, thereby pulling in or paying out the aileron cables. One of our sketches shows the camber gear.
The undercarriage has telescopic front legs, carrying crutches over which is wound rubber cord. The crutches are protected by leather gaiters, as indicated in Figs. 1 and 2. The axle is enclosed in a streamline fairing.
The three-cylinder Blackburne engine is neatly cowled-in all but the top of the cylinders and the oil sump, built integral with the crank-case. The petrol tank is housed in the deck fairing, and provides direct gravity feed.
Taking it all round, the Supermarine is a sound, straightforward machine, with but few experimental features, but incorporating several very sound ideas. From the user's point of view, the machine should appeal on account of its simplicity, and also for the fact that with the biplane arrangement chosen the view from both cockpits is exceptionally good. The machine should be reasonably cheap to build in quantities.

Although making use of the fuselage of the 1924 "Sparrow" biplane, the Supermarine "Sparrow II" is in reality an entirely new machine in that not only is it fitted with a different engine, the Bristol "Cherub," Series III, but the biplane cellule has been replaced by a "parasol" monoplane wing. The general arrangement of the machine is shown in the accompanying scale drawings and photograph, from which it will be seen that the monoplane wing is in one piece and without dihedral angle. The wing tips are of the "square" type, the section being permanent from centre to tips.
We gather that this type of wing was fitted not so much for the purpose of the Lympne competition as for experimental research work. Mr. R J. Mitchell, the Supermarine designer, desired to carry out full-scale experiments on scale-effect, and the wing was placed in this position, about 2 ft. above the fuselage, in order to obtain an unbroken wing of aspect ratio 6 and of Clarke "Y" section. For the dismantling and erecting test it will, presumably, be necessary to remove the wing and place it on top of the fuselage, but this it should be possible to do well within the time limit set for these operations. Quite apart from what sort of performance it puts up in the competition, considerable interest will attach to the "Sparrow II" on account of this use of it for real research purposes, and it will be interesting to see what scale effect on the particular section is found as compared with the results of wind tunnel tests. If the arrangement well above the fuselage is found to give accurate results, and not to make allowance for slip stream effect too difficult, there would seem to be a considerable future for testing wing sections on full scale in this manner at relatively low cost.
As regards the wing structure, this is of normal construction, with two main spars, ribs and ailerons. The latter are hinged direct to the rear main spar. In the centre the wing rests on a cabane of steel tube struts, while the outboard bracing is in the form of a pair of Vee struts on each side. These struts are steel tubes with wood fairings.

At Lympne: Testing the Blackburne engine of the Supermarine "Sparrow."

THE FIRST OF THE ELIMINATING TESTS AT LYMPNE: Some of the competing machines photographed during the folding, housing and re-erecting test. 3, the Supermarine "Sparrow II" which has its wings in one piece and must be transported as shown. 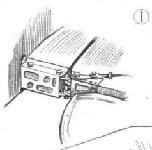