The Beardmore "Wee Bee" monoplane (Bristol "Cherub") taking off in the eliminating trials at Lympne.

ALMOST A GLIDER: The Wee Bee, which appeared again at the Sherburn Meeting on July 13. This was one of the forerunners of the present day light aeroplane. 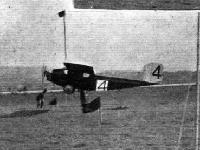 LOW-SPEED FLYING AT LYMPNE: 3, Piercey on the Beardmore "Wee Bee."

THE WINNER: The Beardmore "Wee Bee I," Bristol "Cherub" engine, on which Piercey won first prize in the Lympne Light 'Plane competitions.

Makers of light plane history. The picture shows the Beardmore Wee Bee, with Bristol "Cherub," which won the Lympne light plane competition in 1924.

Beardmore W.B.XXIV Wee Bee I G-EBJJ was built to compete in the 1924 Lympne Light Aeroplane Trials, and won the main prize in the hands of M. Pearcy. Weighing only 840lb with two passengers, the Wee Bee had a maximum speed of 87 m.p.h. on a 32 h.p. Bristol Cherub.

Kingwill on the Beardmore "Wee Bee."

Mr. Norman Edgar's depot with three of his Parnall "Elfs" and a "Wee Bee" lined up for inspection. 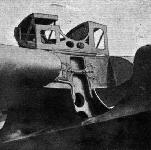 The "Office" of the Beardmore "Wee Bee I" is reached by hinging back the central portion of the leading edge, as shown in this photograph.

CONSTRUCTIONAL DETAILS OF LIGHT 'PLANES AT LYMPNE: (2) Front cockpit covering of Beardmore "Wee Bee I." Leading edge and top cover hinge back for getting into and out of cockpit. 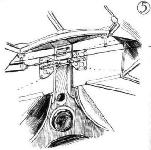 CONSTRUCTIONAL DETAILS OF LIGHT 'PLANES AT LYMPNE: (5) View into rear cockpit of Beardmore "Wee Bee I," showing spar attachment to top of fuselage This cockpit is covered by a hinged window of celluloid.

SOME MORE CONSTRUCTIONAL DETAILS FROM LYMPNE: (5) The aileron gap in the "Wee Bee I" is covered with aluminium strips. The aileron is hinged at bottom edge, and is operated direct from upper edge by a pull-and-push rod.

"STOP THAT LEAK": Different methods of closing the gap between rear spar and aileron in some of the Lympne machines. 1. In the Beardmore "Wee Bee" an aluminium strip is used with edges turned over for stiffening purposes. The front edge is covered by fabric strip doped on. 2. In the A.N.E.C, an aluminum strip is used, stiffened by fore-and-aft corrugations, while in 3, the Parnall "Pixie II" three-ply is employed, and in 4, the Cranwell monoplane, rubber strip. This was later removed as it tended to cause the controls to work stiffly.