DESIGNED by Flight-Lieut. Comper, A.F.R.Ae.S., and built by the members of the Cranwell Light Aeroplane Club entirely in their spare time, the "Cranwell II," which will ДальшеMore>>> carry the number 3 in the competitions, is a very stout effort on the part of a number of enthusiastic amateurs to produce a machine suitable for school work at low cost. It may be mentioned that the machine was designed and the construction commenced more than a year ago, long before the present competitions were decided upon. Consequently the machine has not been planned as an ultra-efficient type for competition work, but rather as a robust and cheaply-made 'bus for strenuous school work in inexperienced hands. That the minimum top speed of 60 m.p.h. stipulated has still been reached is a matter for congratulation, and, unless the whole week at Lympne should prove very windy, there is reason to believe that the "Cranwell II" will manage to cover the course in the high-speed tests at a little more than this minimum. If the wind should be strong it may possibly be difficult to exceed the 60 m.p.h. over the triangular course.
The general design of the "Cranwell II" can be gathered from the general arrangement drawings. It will be seen that the machine is a straightforward biplane, and the only unusual feature is the side-by-side placing of the two occupants. This has been chosen as being more suitable for school work, although the extra size of fuselage may be expected to have a somewhat detrimental effect on the performance.
The fuselage is the usual wood girder structure, with wire bracing, flat-sided and flat-bottomed, but with a cambered deck of thin stringers on built-up formers. The cockpit is fairly roomy, the width being mainly decided by the length of foot bars necessary. The two foot bars, side by side, have a connecting cable going over a pulley and kept taut by a spring. Two control sticks are provided, connected together by a transverse bar above the forked ends. The undercarriage is of the V-type, with legs cut from multi-ply wood, as shown in our sketches, each V being a complete unit. Rubber cord shock-absorbers of usual type are fitted.
The biplane wings are of normal type, with I-section spruce spars. No provision has been made for folding the wings, which will be simply dismantled and hung on to the fuselage for the transport test.
The Bristol "Cherub" engine is mounted on a very small engine bulkhead, the four longerons converging rather sharply towards the nose, and the front portion of the fuselage is butt-jointed to the rest so that, should a more powerful engine be fitted later on, a slightly stronger front portion can easily be built to replace the present one. The petrol tank is mounted on the top plane centre-section, so that there is ample "head" for direct gravity feed.
It may be mentioned that the "Cranwell II" has already been flown by its designer, Flight-Lieut. Comper, who will pilot it in the competitions, and has been found to handle very well indeed, being very stable, yet not too much so, and having at the same time very good manoeuvrability. The slow sinking in a stall is particularly noticeable. It is of interest to point out that Flight-Lieut. Comper intends to fly the machine from Cranwell to Lympne via Croydon, and that he will carry as "spare pilot" his cousin, Flight-Lieut. E. P. Mackay, who is a navigating officer and a lecturer at the Cranwell Cadet College.
Lieut. Comper commenced his aeronautical career with the de Havilland Aircraft Company. He was later on the staff at the N.P.L. at Teddington, leaving there to go to Cambridge, where he spent three years. Lieut. Comper is now a lecturer at Cranwell, and is in charge of the laboratory there.
The machine produced by the Cranwell Light Aeroplane Club is, it must be admitted, a somewhat rough job compared with the highly-finished professionally-built machines taking part in the competitions, but for an amateur effort it is very creditable, and is the concrete expression of a spirit which we could wish was more general in this country. It is to be hoped that the example set by Cranwell will soon be followed brother similar clubs, and all will wish the designer and constructors of the "Cranwell II" every success, not only in the competitions but also afterwards.

GREATEST MILEAGE IN 1924: 762-5 miles were flown by the Cranwell C.L.A.2, piloted by Lieut. N. Comper, its designer. The engine fitted was a Bristol "Cherub." 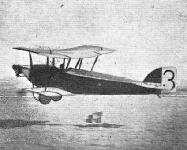