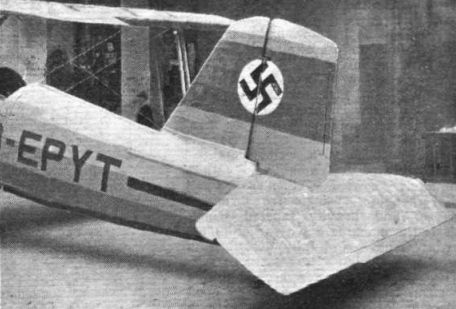 <...>
In a somewhat heavier category is the Arado 69. This is what may be called a middle-weight biplane with staggered wings which are also ДальшеMore>>> heavily swept back. The tail units are unique in that the comparatively small rudder and fin are set forward of the tail plane and elevator and above them. The latter is therefore the aftermost portion of the machine and consists of an unsplit equi-surfaced unit having a comparatively narrow chord and large span, with a small centre "tab" for trimming purposes. With a Siemens Sh.14a radial air-cooled engine of 150 h.p. it appears to be an admirable machine for advanced training.
<...>

The tail units of the Arado 69 - an unusual arrangement obviating the necessity for a split elevator and possibly reducing spinning tendencies.
<<   0/0   >>