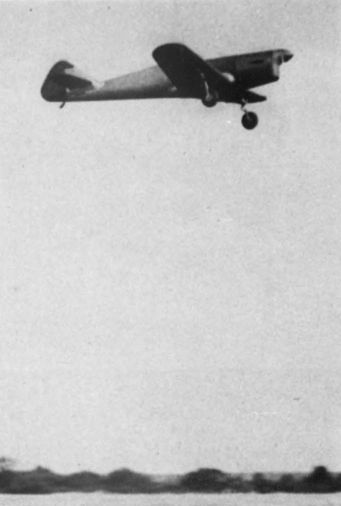 A CHARACTERISTIC feature of M. Marcel Riffard's Caudron racing monoplanes has been the unusual length of the fuselage in relation to the wing. Such proportions have rarely, if ever, been seen in this country, which makes the design of the new Miles Hobby King's Cup racing monoplane all the more interesting.
The actual dimensions are: Span 21ft. 5in., length 22ft. 8in., height (to tip of airscrew) 8ft. 7in., wing area 80 sq. ft.
A Gipsy Major Series II engine is fitted, driving, of course, a "1,000" size D.H. v.p. airscrew. The undercarriage - of no less than 9ft. 6in. track - retracts inwardly and Miles flaps are used in the cockpit enclosure. A very neat Perspex windscreen is incorporated.
The Hobby made its first flight only a few days ago, so complete performance figures are not available. A reasonable estimate of the maximum speed, however, would be a few m.p.h. plus or minus 200 m.p.h.
It is unlikely that the Hobby will be quite as fast as its rival - the T.K.4 - in view of its somewhat larger size and greater wing area.

A rare photograph of the Hobby in the air, taken only days before the 1937 King's Cup Race.
With its feet tucked up, and with a final coat of dope, the Miles Hobby will look far prettier than it does in this, its experimental state.

WOODWORK AS A HOBBY: Mr. F. G. Miles' own pet entry for the King's Cup race. Christened the Hobby, it is powered with one of the new Series II Gipsy Majors driving a "1,000" size D.H. v.p. airscrew. Unorthodox features of this fascinating little wooden racer are the wide track and the short span, which is actually less than the length.

FOR INDOOR FLYING: The little Miles Hobby undergoing a fuel flow test before going to Farnborough, where it is to be used for research in the full-scale wind tunnel. The machine is small enough to be tested complete.

MAJOR-POWERED MINOR. The diminutive Hobby single-seater sports monoplane which will be the mount of its designer - Mr. F. G. Miles - in the King's Cup Race. It has one of the new Gipsy Major II engines.
The nearly complete Hobby at Woodley, minus its cockpit canopy and wheel covers. Note the wide track undercarriage.

The Hobby, bearing the Class B markings U2, at Woodley in June 1938 during fuel flow tests.

Seen after removal from the RAE’s wind tunnel, the Hobby now bears roundels and the serial L9706. It was struck off charge on July 24, 1939, and never flew again.

The Hobby nearing completion at Woodley in September 1937. It was the first Miles aircraft to have a retractable undercarriage. 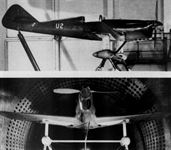 The Hobby was sold to the Royal Aircraft Establishment in May 1938, and is seen here in Farnborough's 24 ft wind tunnel in December of that year.

This G.A. drawing shows the unusual proportions of the Miles Hobby and the relatively wide track of the undercarriage.