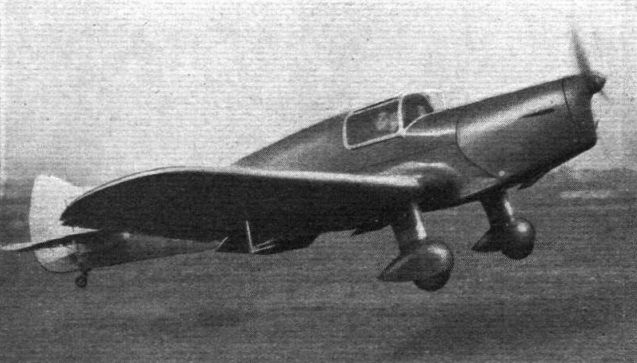 THE MILES WHITNEY STRAIGHT
A Wide Speed Range, Vic<...> Characteristics and Studied Comfort in the Latest Addition to the Owner-Pilot Class: Flying a Machine With Dual Personality

Although the actual take-off run is not appreciably shortened by using the flaps in the half-down position, this position can be used for small-field work, provided that the technique is thoroughly understood and practised. In short, the effect is one of providing flapped characteristics without suffering any marked drag. With the flaps down, considerably greater liberties can be taken at low speeds and the stalling speed is, too, slightly lower.
In normal flight one develops the habit with the Straight of placing the feet firmly on the floor and of ignoring the rudder. Perfect turns can be made on the stick alone, and even steep turns can be changed over without any marked movement of the lateral bubble from its central position, provided that the manoeuvre is carefully carried out. The ailerons are particularly smooth, effective and light, and semi-aerobatic flying is made very pleasant indeed. Minor corrections in course and lateral level can be made on the rudder alone (while eating one's lunch or working a C.D.C.), and in smooth air the machine will probably fly more or less indefinitely hands and feet off - though a period of 4 1/2 minutes was the longest during which I found myself able to leave the machine alone. The ability in my case was limited by visibility and a consequent fear of losing myself in the Reading area. Cabin silence nowadays is expected rather than praised, and the Straight is well up to standard in this respect.
Familiar Miles construction is used throughout the wooden air frame and, apart from the special care exercised in both internal and external work, there is nothing out-of-the-ordinafy about the machine.
The engine cowling is a centrally hinged two-piece affair and either side may be propped up by two struts which normally lie in a clip along the top engine bearer; this little feature should save a fortune in hat cleaning. The normal tank capacity is thirty gallons, providing a still-air range of 570 miles, but special tanks, carrying a total of forty-five gallons, can be fitted if desired. A single electric dash-gauge is used for reading off the contents of either tank at will.
While in flight the range of vision from the cabin is exceptionally good, and is limited only by the nose and the low wing. Before opening up for the take-off the sky behind can be examined without difficulty or neck strain, and the one-piece Perspex windscreen gives one as much general forward vision as is humanly possible in any nose-engined machine. Whether or not this somewhat expensive moulding will require replacement after, say, a year's flying remains to be seen.
Behind the wide one-piece seat there is a vast area for luggage accommodation, complete with straps, and on the rear bulkhead there is a hat rack. This will undoubtedly be used for a host of oddments which cannot comfortably be kept in the two cubby-holes in the dash.
It is difficult to see how entrances and exits can be made easier in the low-wing type of machine in which the occupants are placed well forward, but, with a pair of control columns and what not, the job is somewhat contortionist. Furthermore, an inexpert passenger will undoubtedly place muddy shoes on both seats at least once before he or she is finally in place. In this connection one wonders why the door-cum-roof is on the port side. Nobody cares about the pilot's feelings, but everyone cares about those of a passenger - particularly one who has never flown before - and it is the pilot who usually stays in his place. The pilot, too, will soon learn to enter gracefully, and will be less likely at any time to put his foot through fifteen pounds-worth of compass and dashboard. When closed, the top is brushing the pilot's hat (for the short pilot will probably demand a cushion in order that he shall have the maximum visibility), but this is probably an advantage, inasmuch as there is a shorter body movement in an unexpectedly bad bump.
These, however, are very small points of criticism when examined beside the remarkable efficiencies of this new private-owner type. Even at its comparatively high price, it is likely to hold a definite place for itself during the next year or two. Then, perhaps, the Miles Whitney Straight II will be coming along.

Making its first public appearance early this year, the Miles Whitney Straight has sold, and is selling, in comparatively large numbers. On 130 h.p. the Straight carries two people and their luggage at a cruising speed of 130 m.p.h. 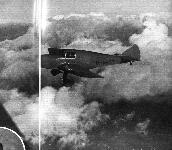 Sailing along tranquilly at a comfortable "twenty-one hundred," with the A.S.I, telling of progress of well over two miles a minute, the appealing little Miles Whitney Straight side-by-side two-seater, out for an airing over Reading, presents an attractive subject for Flight's photographer. Such surroundings carry the mind from things mundane and mercenary, but for those who want to know - and it seems there are many - the price is ?985.

The view gives a fair idea of the plan form.

The Miles Whitney Straight is seen landing, with its flaps in the fully lowered position; an intermediate position is employed for takeoff.

FOUR TO ONE: The Miles-Whitney Straight Special two-seater (Gipsy Major) has a speed range of 4:1. Note the new style of clear-view windscreen.

OFFICIAL DELIVERY: The first oi the production Miles Straight Specials at Heston. Mr. Miles is entering (or leaving) the side-by-side cabin, while Mr. Whitney Straight stands on the "running board."

Miles Whitney Straight G-AFGK was on its way west to the Lindbergh Museum in Hawaii where its relationship to the Miles Mohawk is presumably the connection. 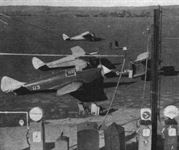 Seen over the petrol pumps, is the sunny expanse of Lympne - part Air Ministry airport, part Service aerodrome, but primarily the home of the Cinque Ports Flying Club.

"I was beginning to realise that I might be in the running for a place, provided the following wind did not help the two Miles Whitney Straights too much."

September in the Rain: The King's Cup machines were wheeled into the De Havilland erecting shops to afford shelter to the associated humanity during Thursday's downpour. 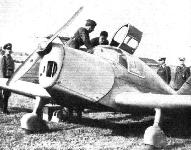 TRIPLE ALLIANCE: A Miles Whitney Straight was used by Col. Lindbergh for his visit to Berlin last week. He is seen arriving at Staaken Aerodrome, where, with Mrs. Lindbergh, he was welcomed by Col. Kassner on behalf of General Goering, and by Herr Wolfgang von Gronau, president of the German Aero Club. 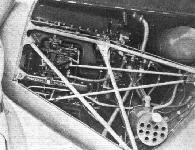 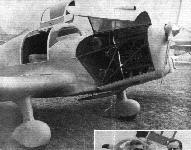 The Gipsy Major engine exposed to view, and the very roomy cabin open.

TALKING IT OVER: The recent announcement of a working arrangement between Phillips and Powis Aircraft Ltd., and Rolls-Royce Ltd., lends interest to this photograph of a group at Reading last week. From left to right are Mr. Hives, Mr. Ellor and Lt. Col. Darby of R.R. and Mr. C. Powis and Mr. F. G. Miles of P. and P. The other "personalities" are a Miles Whitney Straight and a Bentley.

A group during a demonstration of the Miles Whitney Straight at Heston (left to right): Lt.-Col. L. A. Strange, of Straight Corporation, Ltd.; Mr. Alan Muntz, of Airwork; Mr. R. E. Grant-Govan of Indian National Airways; and Mr. Whitney Straight.

A handicapper handicapped: Capt. Dancy, suffering from an injured foot, does a little scrutineering. He is examining the Miles Whitney Straight of Brig.-Gen. Lewin, who is seen with him.
On the right: What they were looking at - two special venturi tubes which, when power for blind-flying instruments was required, could bs clamped outside the window of the Whitney Straight. 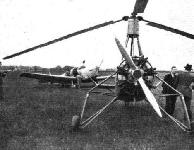 A glimpse of the Miles Whitney Straight under the rotor blades of the C.30 Autogiro.

Phillips and Fowis were represented by the Hawk Trainer, the Nighthawk, and the Miles Whitney Straight, all fitted with Gipsy engines.

The UK's sole remaining Miles Whitney Straight, G-AEUJ, left Midlands Airport on March 26, 1979 to be refurbished by Speedwell Sailplanes of Manchester. The aircraft has been stored in a hangar at Castle Donnington, and has not flown for about seven years. New owner Bob Mitchell plans to have it flying again in a year. The type was designed and built at the instigation of Whitney Straight (later Air Cdre), who died on April 5. 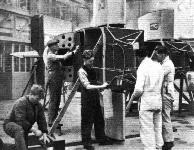 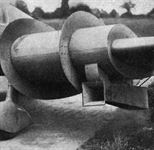 General (and somewhat startling) appearance of the experimental section on the Miles Whitney Straight. 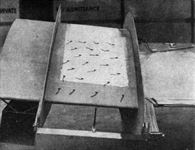 The experimental section. The side plates are intended to prevent the spilling of the air. The strut behind the trailing edge carries the pitot comb for measuring the profile drag.

The cabin manometer to which the pitot comb shown in the previous picture is connected.

This beautiful sterling silver model of his Miles Whitney Straight was presented to Brig.-Gen. Lewin by the directors of Phillips and Powis Aircraft and of Whitney Straight, Ltd., in recognition of his fine performance in the King's Cup Race. It is the work of the Goldsmiths and Silversmiths Co.

Undercarriage simplicity: A sectioned view of one of the cantilever legs, which have a maximum movement of 5 1/2 inches.
<<   0/0   >>