THE MILES MONARCH
One Step Nearer the Ideal : Practical Approach Adjustment : Error-proof Flap Control : Some Impressions of the Three-seater Version
By H. A. TAYLOR

The Gipsy Major engine has either a wooden airscrew by the Airscrew Co., Ltd., or a Fairey metal airscrew, and is fitted with a Claudel-Hobson carburettor, B.T.H. magnetos and K.L.G. sparking plugs; ignition cable is by Johnson and Phillips, Ltd., and Superflexit petrol piping is used. Filters are by Auto-Klean Strainers. Ltd., and fuel cocks by Vickers (Aviation), Ltd.. Smiths instruments are used, while Reid and Sigrist turn-and-bank indicator and Sperry blind-flying instruments can be fitted.
Saro plywood and Bamberger's spruce are used in the fuselage, which is covered with Titanine de luxe finish. The cabin is upholstered by Kumbold, and Perspex windscreen and Rhodoid windows are fitted
Various items in the airframe are supplied by J. Stone and Co. (alloy fittings), British Aluminium Co., Reynolds Tube Co., Ltd. (steel tubing), Herbert Terry and Co. (springs), and the British Aluminium Co. (aluminium). Simmonds elastic stop nuts are used, while A.G.S. parts are supplied by Brown Brothers (Aircraft), Ltd.
Sir George Godfrey and Partners make the flap gear. Control cables are by Bruntons (Musselburgh), and ball bearings by Skefko and Hoffmann. Automotive Products, Ltd., are responsible for the undercarriage legs, and the Bendix Co. the brakes, while the wheels and tyres are Dunlop. Airwork, Ltd., are the sole agents in Great Britain.

INCORPORATING various modifications and improvements resulting from experience with the Miles Whitney Straight, Phillips and Powis this year produced the Miles Monarch. Since the Straight was originally intended to be, as nearly as possible, an ideal type for the private owner, it is reasonable to suppose that the new Monarch must come even nearer to this ideal.
Basically the layout is very similar, with a side-by-side two-seater cabin and ample luggage accommodation on a tray immediately behind the seats. The structure is of stressed plywood. The Monarch, however, has a somewhat roomier cabin, and it is produced in two forms, one of which is a three-seater. The moulded one-piece screen is deeper and special attention has been paid to ventilation.
Mr. Miles was one of the first British designers, if not the first, to fit split trailing-edge flaps to his machines, and in the Monarch the vacuum-operated gear has been modified to incorporate an interesting safety device, which he calls a glide control. With this device a gate is provided to prevent the flaps from being raised completely in one movement, and the throttle is interconnected with the control so that, when it is necessary to use the engine suddenly either during or after the approach, the flaps move up automatically to the 20-degree position. There is, consequently, no sink and most of the drag is removed at the moment of opening the throttle. In its new form, too, the gear permits the flap position to be changed through an infinite variety of angles. In other words, the flaps are designed to give the best possible results both as lift increasers and air brakes.
Magnesium alloy appears largely in construction of control items, and these, with other details on the machine, have received special consideration. Both performance and appearance has been improved by the use of a highly polished finish. The engine is, of course, a Gipsy Major, with a wooden airscrew for the two-seater and a metal airscrew for the three-seater.
Monarch data:- Span, 35ft. 7in.; length, 26ft.; all-up weight (two-seater). 2,000 lb., (three-seater) 2,150 lb.; weight empty (two-seater), 1.360 lb. (three-seater) 1,390 lb.; maximum speed, 145 m.p.h.; cruising speed at 2,050 r.p.m., 125 m.p.h.; stalling speed (with flaps), 40 m.p.h.; rate of climb, 850 ft./min.; normal cruising range at 2,050 r.p.m., 620 miles; cruising range with extra tankage at 2,050 r.p.m., 910 miles; and price, (two-seater) L1,250, (three- seater) L1,325.
Makers:- Phillips and Powis Aircraft. Ltd., Woodley Aerodrome, Read­ing. Berks (Sonning 2211).

REGAL POISE: The prototype Monarch, Mr. F. G. Mile's new offering to the private owner. One of its big selling points is likely to be the "glide control," the precise nature of which is still something of a secret.

THE LATEST MILES: The new Monarch, which may be described as a development of the Miles Whitney Straight, posed suitably in front of the Falcon Hotel at Reading Aerodrome. This machine, which has a number of interesting features, should be out and about in a week or two.

SOMETHING NEW FOR THE PRIVATE OWNER: The Miles Monarch two-three seater, which was illustrated for the first time in last week’s issue, flying near Reading. Its lines are distinctly familiar, though one or two interesting innovations will appear in due course. 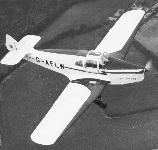 Latest of the Miles private-owner types, the Monarch, shown here in three-seater form. It has "glide control" flap gear and cruises at 125 m.p.h.

This is sunshine: The Monarch flying above the clouds near Reading. 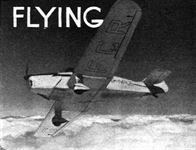 Plan form: Unmistakably Milesian is the Monarch viewed from this angle. For this and the other photographs the machine was posed by Mr Skinner, the chief test pilot while Capt Ayre flew the photographic platform - a Whitney Straight with a Series II Gipsy Major.

Sir Kingsley Wood with Mr. F. G. Miles prior to flying in a Monarch. 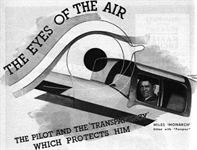 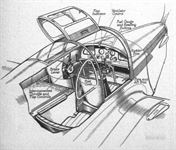 The layout of the controls, of the third seat and of the luggage compartment are clearly shown in this cut-away sketch ol the interior of the Monarch. The flap control is shown in the 25-degree position, with the throttle half open

Diagrammatic and perspective drawings which show the simple operation of the interconnection and gate arrangement of the throttle and flap controls. 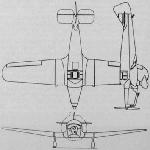