The upgrades on the MiG-29 fleet had no real impact on the aircraft’s overall combat capabilities as the Fulcrum’s original 1980s-era sensors and weapons remained unchanged.

The Slovak Air Force has a fighter force of 12 Fulcrums, including ten single-seaters and two two-seaters, tentatively slated to remain in service until the end of decade.

All 12 Slovak Fulcrums were upgraded and overhauled by February 2008. The modernisation featured both Russian and Western equipment.

The most spectacular event by Russian aerobatic teams is the dense launch of flares. This Su-30SM from the Russian Knights fires large 50mm flares during the show. 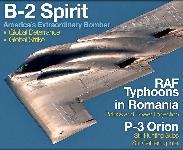 B-2 82-1068 Spirit of New York emerges from its hangar at Whiteman Air Force Base during exercise Global Thunder 17. In addition to assessing joint operational readiness between forces assigned to US Strategic Command, Global Thunder also assesses command and control functionality in all of USSTRATCOM’s mission areas.

Airmen prepare to refuel B-2 88-0329 Spirit of Missouri at Andersen Air Force Base, Guam.

Brigadier General Paul Tibbets, the 509th Bomb Wing commander, welcomes home two B-2 pilots after their 33-hour round trip mission to Libya on January 18 and 19, 2017.

Crew chiefs assigned to the 509th Aircraft Maintenance Squadron shield themselves from the rain under B-2 88-0330 Spirit of California at Andersen Air Force Base, Guam during a deployment from Whiteman Air Force Base in support of bomber assurance and deterrence missions.

Technicians assigned to the 509th Aircraft Maintenance Squadron prepare a B-2 Spirit aircraft to be towed at Andersen Air Force Base, Guam.

B-2 93-1087 Spirit of Pennsylvania lands at Whiteman Air Force Base on January 19, 2017 after a 33-hour mission to a target area near Side, Libya. In conjunction with the Libyan Government of National Accord, the US military conducted precision airstrikes on January 18, 2017, destroying two ISIS camps 45 kilometres southwest of Side.

A KC-135R Stratotanker from the RAF Mildenhall-based 100th Air Refueling Wing refuels 509th Bomb Wing B-2 89-0129 Spirit of Georgia late at night on January 18, 2017, during a mission that targeted Islamic State training camps in Libya.

Douglas DC-3A s/n 10035, made in 1943, flew from the United States to Russia via Alaska and Siberia in 2015, and was sold to a Russian private owner. At Kubinka, the aircraft was piloted by Valentin Lavrentyev and Pyotr Deynekin, the first CinC of the post-Soviet Russian Air Force.

EP-3E Aries III, BuNo 156517 is one of 12 operated by Fleet Air Reconnaissance Squadron 1 (VQ-1) 'World Watchers' seen at Elmendorf Air Force Base, Alaska during Exercise Northern Edge 2017.
An EP-3E Aries II multi-intelligence reconnaissance aircraft flew daily missions in support of the overland and maritime components of the exercise. The aircraft is equipped to exploit a wide range of electronic emissions which is fused by the crew with data received from other assets and disseminated as collaborated information for a variety of roles including battle space situational awareness and suppression of enemy air defences.

US Air Force C-17A Globemaster III's on the flight line as a KC-10 Extender takes off, at Joint Base Lewis-McChord, Washington.

A KC-135R Stratotanker from the RAF Mildenhall-based 100th Air Refueling Wing refuels 509th Bomb Wing B-2 89-0129 Spirit of Georgia late at night on January 18, 2017, during a mission that targeted Islamic State training camps in Libya.

P-3C AIP BuNo 158215 is assigned to Fleet Air Reconnaissance Squadron 1 (VQ-1) ‘World Watchers’. The aircraft is shown at the start of its take-off ri in at its home station Naval Air Station Whidbey Island.

A P-3C Orion assigned to Patrol Squadron 46 (VP-46) at Naval Air Station Whidbey Island prior to a training mission.

This P-3C Orion BMUP is fitted with an APS-149 Littoral Surveillance Radar System.

A P-3C Orion undergoing preflight checks at Naval Air Station North Island prior to a mission in support of a Composite Training Unit Exercise for USS.

The first Sikorsky UH-60M Black Hawk for the Slovak Air Force on the production line.

A UH-60 Black Hawk piloted by soldiers of the 1st Battalion, 185th Aviation Regiment based at Tupelo, Mississippi lift off with a water bucket attached while conducting water bucket training and certification at Gjakova Airfield, in western Kosovo.

US Air Force C-17A Globemaster III's on the flight line as a KC-10 Extender takes off, at Joint Base Lewis-McChord, Washington.

C-17A Globemaster III 99-0166 being prepared for a mission during Exercise Mobility Guardian at Joint Base Lewis-McChord.

Airmen load cargo onto a C-17A Globemaster III at Joint Base Lewis-McChord.

Major Justin Reis, of the 59th Medical Wing based at Joint Base San Antonio, Texas, leads a team attending to a patient in a simulated medical emergency aboard a US Air Force C-17A enroute to Fairchild AFB, Washington.

A brake chute container installed beneath the aft fuselage of a MiG-29KR shipborne fighter replaces the type’s conventional arrestor hook when operating from a land base. The hook is reinstalled before deployment aboard the carrier.

Slovakia’s jet trainer is the L-39ZA, but the type also has a second­ary ground attack capability.

A Republic of Korea C-130 taxis in to collect cargo at Yakima Air Terminal-McAllister Field, Washington.

The seven-strong L-410 fleet is set to be complemented by a pair of Leonardo C-27J Spartan tactical transports.

The Mi-17 MODER is an armed assault helicopter used in the close air support role thanks to its capability of using up to six 32-round 57mm rocket packs and UPK-23-250 gun pods.

MiG-21 LanceR 6207, one of many detached to Mihail Kogalniceanu Air Base from Festesti Air Base.

Slovakia was the first country in Europe to get true Westernised MiG-29s sporting NATO-standard communication, navigation and IFF equipment, but the logistics support proved to be a serious challenge.

The only airworthy MiG-15UTI in Russia, RA-0488G, was originally made in Czechoslovakia in 1954. The aircraft was restored in 2011 and today anyone can fly in the jet for less than L3,000.

RAF Atlas C1 ZM408 departs Joint Base Lewis-McChord on a mission during the second half of Exercise Mobility Guardian.

A new Russian escort jammer, the Il-22PP Porubshchik debuted over Kubinka on August 12, 2017. Aircraft RF-90786 is the first operational Il-22PP that has been officially handed over to the Russian Air Force after conversion on October 26, 2016. The Il-22PP features four large bulbous dielectric fairings on both sides of the fuselage, front and aft, an egg-shaped fairing in the aircraft’s tail, and a series of smaller aerials. Note the fixed pod with flare launchers beneath the fuselage. The aircraft’s livery resembles that of Aeroflot during the Soviet era.

A US Air Force C-130J Hercules climbs away after an airdrop at Yakima Training Center, Washington. 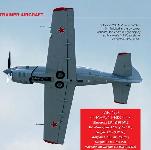 An example of a RED Aircraft GmbH A03T V12 engine was displayed with the second Yak-152 prototype, side number 02. The second Yak-152 is painted in a red, white and yellow livery to promote the type to the civilian market.

An illustration of the Sikorsky-Boeing Defiant JMR TD aircraft.