Every fighter type in the Hellenic Air Force fast-jet combat fleet was involved in the exercise. 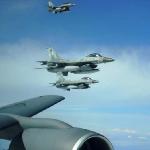 1) The UAV, in red circle, during tracking. 2) The Python missile, indicated by the green arrow, approaches the UAV (in red circle). 3) The UAV is hit. 4) The Sufa that shot the UAV down, highlighted by the blue rectangle, passes over the wreckage. 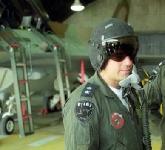 The IAF Flight Test Center at Tel Nof flies Sufa 401, which is instrumented for trials of new equipment.

The final F-16I, Sufa 898, at Hatzerim shortly after arrival in Israel on February 1, 2009 and prior to having 107 Squadron markings applied.

A Negev Squadron tradition is to kick new members after their first solo flight.

The sizes of the external fuel tanks and conformal tanks are clear on this 107 Squadron Sufa being prepared to depart Hatzerim with two JDAM bombs in March 2009. 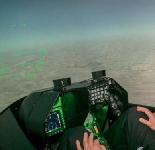 An unspecified engine problem has grounded the AMI's T-260Bs.

US Marine Corps VH-60Ns from HMX-1 en route from Schiphol Airport to Amsterdam on March 24, 2014 for President Obama’s visit to the Rijksmuseum.

Russia hopes China's order of ten used Il-76s will provide a stepping stone to a future purchase of Il-76MD-90As.

Fast jet students remain at Lecce for training on the FT-339C. 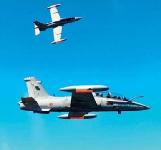 Under the AMI's new training system, as before, students selected for fast jets train on the FT-339C.

Around a dozen Mainstays are in service, all are based at Ivanovo, 250km from Moscow.

India currently operates Il-78s in the tanker role, but Russia sees a future market in the country for A-50s.

Reportedly an airborne command post variant of the Il-76MD-90A will be developed to replace the Il-82, which has a distinctive dorsal fairing.

Among the many VIP jets visiting Schiphol for the summit was Gulfstream IVSP 7T-VPC belonging to the government of the People's Democratic Republic of Algeria, seen landing on March 24, 2014.

The AMI’s revised training system is intended to reduce the costs of training pilots on multi-engine types like the C-27J.

AS532U2s Cougar Mk2s from 300 Squadron were on standby to support ground forces.

Tremendous heat-hazed image of Eagles landing at Souda Air Base.

An impressive line-up of Brazilian beasts. 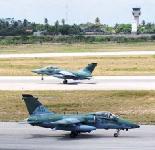 The A-1M’s modernised cockpit features the avionics previously used in the F-5EM/FMs.

Italy's national aerobatic team, the Frecce Tricolori, will be the first unit in the AMI to fly the M-345.

While the M-345 appears similar to the M-311, it will have a new engines and avionics.

Mirage 2000s were only in FAB service for seven years, providing an interim air defence capability. 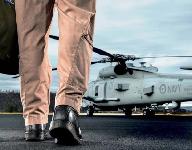 The majority of the VIP aircraft were parked on runway 18R/36L, including Boeing 747-4B5 10001 of the Republic of Korea Air Force's 296 Special Transport Squadron.

Beriev is designing the A-100 to supplement - and in future replace - the A-50U.